"Please explain the symbolism in the scene showing Satan holding a bald baby. Thank you."

That's just one of dozens of e-mails we've received in the last few days, asking about a surreal scene in The Passion of The Christ where Satan is shown cradling a hideous baby who looks like he's about 40 years old.

The scene occurs during the flogging of Christ. Satan is passing through a crowd of onlookers, cradling an infant in his arms. The baby turns to face the camera, revealing a sinister infant, creeping out audiences everywhere.

We took your questions straight to the source, e-mailing Mel Gibson's publicist for an answer.

When asked why he portrayed Satan—an androgynous, almost beautiful being played by Rosalinda Celentano—the way he did, Gibson replied: "I believe the Devil is real, but I don't believe he shows up too often with horns and smoke and a forked tail. The devil is smarter than that. Evil is alluring, attractive. It looks almost normal, almost good—but not quite.

"That's what I tried to do with the Devil in the film. The actor's face is symmetric, beautiful in a certain sense, but not completely. For example, we shaved her eyebrows. Then we shot her almost in slow motion so you don't see her blink—that's not normal. We dubbed in a man's voice in Gethsemane even though the actor is a woman … That's what evil is about, taking something that's good and twisting it a little bit."

But what about the ugly baby?

"Again," said Gibson, "it's evil distorting what's good. What is more tender and beautiful than a mother and a child? So the Devil takes that and distorts it just a little bit. Instead of a normal ... 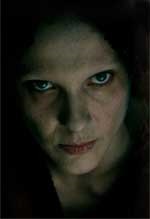