Eritrea ramps up brutal crackdown on Christians.
by Jeff M. SellersJuly 18, 2005
This article is from the July 2005 issue. Subscribers can read all of CT's digital archives.

In March, police in Eritrea arrested the pastor of a Full Gospel church on a busy boulevard in the capital city of Asmara. In his mid-50s and married with four children, Kidane Weldu was neither charged nor allowed outside contact.

"He is held incommunicado in the second police station in Asmara and is at risk of torture," according to an Amnesty International report. "Amnesty International considers him a prisoner of conscience, detained solely for the peaceful exercise of his right to freedom of religion."

Compass Direct reports that Weldu is one of 16 pastors and 883 Christians overall in the East African nation jailed for their faith. The Eritrean government—while claiming that it allows freedom of religion—has stepped up its arrests of Christians this year after outlawing independent churches in 2002. Security forces have jailed at least 240 Christians this year.

Many of those arrested are held in metal shipping containers. Sweltering in the daytime and cold at night, the containers have no sanitation. Infectious diseases and diarrhea are common.

In November of last year, the government also began arresting members of Roman Catholic and Evangelical Lutheran churches, as well as those in a renewal movement in the officially recognized Eritrean Orthodox church—the only legal faiths other than Islam.

Since May 2002 the government has denied or indefinitely prolonged church registration applications. It has also forbidden members from worshiping privately in their homes. Rights organizations report Eritrean authorities torture Christians to try to force them to recant or stop practicing their faith.

Why the crackdown? Historically rooted in Marxist ideology, the government says evangelicals are unpatriotic, foreign, ...

Dumped into Drums
expand
hide this 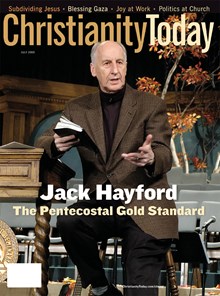 This article is from the July 2005 print issue. Subscribe to continue reading.