Six months ago, The Fray was just a local band in Denver, driving a van from show to show. Now they're riding high on the charts—and learning to deal with the trappings of sudden fame.
Stan Friedman|July 17, 2006

Since the beginning of the year, The Fray have gone from being a favorite local band in Denver to national headliners. Their first album, How to Save a Life, is well on its way to going Platinum, or more than one million units in sales. Their music has appeared on at least half a dozen TV shows and in an advertisement for The Devil Wears Prada. They've been on the cable music channels and on every late show on TV (Letterman, Leno, Conan, Ferguson). They've even been Xbox Live Artist of the Month!

Despite all of those measures of success, the band best gauges its impact by simply reading e-mail from fans.

There was the e-mail with a video of two students playing an imaginative version of the title track to How to Save a Life at a high school talent show. Isaac Slade, The Fray's pianist, lead vocalist and songwriter, laughs about it: "The kids were in 11th grade, and we used to do the same thing."

Then there are the more sobering contacts, like the family of a teenager who died in a car accident. They wanted the band know the last song the young man had downloaded was "How to Save a Life," and that he had played it constantly.

"They used some of the lyrics in the bulletin, and his friends had Save a Life with his name tattooed on their arms," Slade says. He pauses before adding, "It's so humbling to hear people connecting to these songs in such a strong way."

The e-mail responses and conversations with fans while on the road are affirmations of what Slade says is God's call to the band away from the Christian music genre and into a secular market. (They are on the Sony label.)

Critics have credited the band's success in part to their catchy hooks and melodies, but the power of Slade's lyrics also has been key to ... 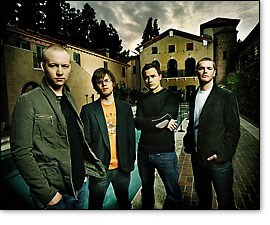