Aid worker killed in Afghanistan, Palm Beach Atlantic University president resigns, and other transitions.
Transitions in the Evangelical WorldNovember 19, 2008
This article is from the December 2008 issue. Subscribers can read all of CT's digital archives.

Killed • Gayle Williams, a 34-year-old aid worker for Christian charity Serve Afghanistan, in a daylight shooting in the Afghan capital of Kabul. Taliban militants said they shot her because she was spreading Christianity. The British and South African national had been working with the disabled in the country for two years, and had recently moved to Kabul for safety. Serve says it has a policy against direct evangelism.

Installed • Charles H. Webb, as president of Spring Arbor University in Michigan. He has served as vice president for university development at Michigan State University since 1995.

Appointed • Jay Hein, as senior fellow and director of the Program for Faith and Service at Baylor University's Institute for Studies of Religion. He has been director of the White House Office of Faith-Based and Community Initiatives since 2006.

Hired • Tetsunao "Ted" Yamamori, as president and ceo of WorldServe Ministries. Before joining the Frisco, Texas-based missions organization that focuses on China and Cuba, he was president emeritus of Food for the Hungry International and international director of the Lausanne Committee for World Evangelization.

Join in on Facebook
Tags:
International | United States
Issue:
December 2008, Vol. 52, No. 12, Pg 16
More From:
Transitions in the Evangelical World 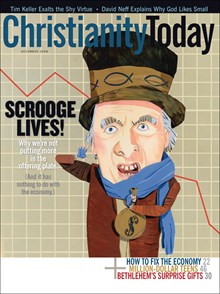 This article is from the December 2008 print issue. Subscribe to continue reading.