Pat Robertson retires, Moody chooses new president, and other transitions in the Christian world.
May 21, 2009
This article is from the June 2009 issue. Subscribers can read all of CT's digital archives.

Died • David "Pop" Winans, the patriarch of the famed gospel-singing Winans family, April 8 in Nashville. He was 74.

Leaving • Atul Tandon, as World Vision's senior vice president for donor engagement, to lead the International Network of United Way. Tandon is credited with tripling the size of World Vision's revenue during his nine-year tenure.

Hired • Dante Gebel, a popular Argentine an televangelist, by the Crystal Cathedral to lead the California megachurch's Hispanic ministry.

Died • Earl Paulk, founder of Atlanta's Cathedral at Chapel Hill megachurch, on March 29 in Atlanta. The 81-year-old leader was long marred by charges of sexual misconduct.

Promoted • Mark Tooley, as president of the Institute on Religion and Democracy, a mainline renewal think tank in Washington, D.C. He succeeds retiring president Jim Tonkowich. 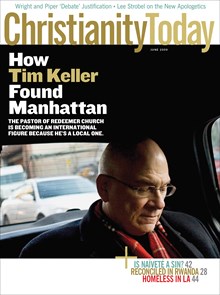 This article is from the June 2009 print issue. Subscribe to continue reading.