Jim Caviezel and Steve McEveety, who played critical roles in The Passion, expose human rights violations in Iran through their new film, The Stoning of Soraya M.
Peter T. Chattaway|June 23, 2009

Timing, they say, is everything. The Stoning of Soraya M., which depicts the rigged trial and execution of an Iranian woman whose husband has grown tired of her, goes into limited release this Friday after playing at a few film festivals—and it happens to be coming out at a time when the eyes of the world are on Iran and the crackdown that has taken place there against the protestors who claim the June 12 election was rigged by the authorities.

However, when CT Movies spoke to producer Steve McEveety and co-star Jim Caviezel (who played Jesus in The Passion of the Christ) about the film, the election was still a few days away—so they never had a chance to address any of the connections that may exist between their movie and the headlines that are currently shaking the world.

They did, however, discuss how volatile the situation is in the Middle East, and how it took a lot of courage for writer-director Cyrus Nowrasteh, an American filmmaker of Persian descent, and his cast of mostly Iranian actors (including Shohreh Aghdashloo, who was Oscar-nominated for House of Sand and Fog) to make the movie that they did.

For example, the film is based on a book by French-Iranian journalist Freidoune Sahebjam, who was tried in absentia and sentenced to death by the Iranian government because he reported extensively on the human-rights violations in that country. McEveety recalled how he and Caviezel had planned to meet Sahebjam while working on the film, but "the night before we were set to leave, we got word that he died. So it was kind of scary—we didn't know how he died. But we eventually found out that it was natural causes, thank God."

Was there any concern that there might be a fatwa—or death sentence—on ... 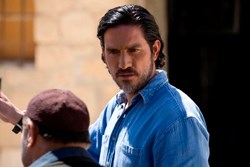