In his first year as new frontman of Newsboys, Michael Tait says he couldn't ask for a better fit.
Mark Moring|July 13, 2010

In March 2009, one of Christian music's most enduring bands, Newsboys, had a newsflash: After 22 years (and more than 2000 shows) with the band, frontman Peter Furler was stepping away from the grueling touring schedule, and Michael Tait, formerly 1/3 of supergroup dc Talk, would take Furler's place on stage. At the time, a press release said that Furler would "continue with the band and his trademark songwriting and production will remain as he focuses his professional career toward future Newsboys recordings."

In the year-plus since, it hasn't quite turned out that way. Furler has really stepped away from the band, and Tait has moved in not just as concert frontman, but as the band's new leader in many ways, including taking a major role in songwriting for their new album, the aptly named Born Again, which releases today. Tait says that Furler is still on board as a "creative consultant," but is mostly enjoying long overdue time with his family.

The remaining Newsboys members have welcomed Tait with open arms: "I can't believe Michael was available," said drummer Duncan Phillips. "His vocal range and style allow us to musically explore avenues we haven't in the past." Adds guitarist Jody Davis, "Tait is great for us because he's a real team player and brings a lot of enthusiasm to the mix of personalities." "We're getting a new lease on life from this," adds keyboardist Jeff Frankenstein. "It's providential. I couldn't see things happening any other way."

After about a decade of moderate success as a solo artist (since the 2000 break-up of dc Talk), Tait is thrilled to be with a group that he has considered friends for decades. We recently caught up with him to talk about the move. 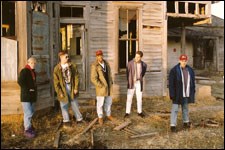