In a rousing adventure, the classic character saves Mars. After all, his initials are J.C.
Josh Hurst|March 9, 2012
Our Rating

John Carter is the live-action debut of director Andrew Stanton, an Oscar winner who helmed Finding Nemo and Wall*E. It is also an appreciably big-budget movie, a would-be blockbuster from Disney that marks an early start to the summer moviegoing season. Why would Disney entrust such a big title to an untested live-action director? I can think of two reasons. One is that enough of John Carter is computer-animated that it almost counts as an animated feature. The second is that even when what's on the screen is flesh-and-blood humanity, the movie has a decidedly cartoon-ish feel.

Not that it's as good as either of those Pixar masterpieces—or for that matter, the live-action debut of Stanton's Pixar cohort, Brad Bird (The Incredibles, Ratatouille), whose recent Mission: Impossible entry was also an enticingly cartoony non-cartoon. Ironically enough, the fish in Nemo had a lot more humanity than any of the humans in John Carter, and as science fiction goes, it's not as bold or as visionary as Wall*E.

But let this be said for John Carter" It's terrific entertainment. Stanton has crafted a movie that is way too long and far from perfect, but it's paced to hold the audience's attention. Its world-creation is superb, its action scenes compelling. It's not really funny, but there are enough moments of humor to keep it from being too solemn. If you're a sci-fi geek or fanboy, you'll probably love this. If you hate anything involving spaceships or little green men, you won't.

Most of all, John Carter is winsome because it stays true to its roots as a semi-pulpy fiction, but doesn't ratchet up the corniness. It's based on a book by Edgar Rice Burroughs, who also created Tarzan; between the book and the film, there have been many ... 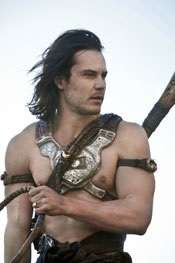