I don't remember a movie ever making me feel as empty as 2 Guns made me feel.

Ever since Roger Ebert opened his review of Rob Reiner's North with "North is one of the most unpleasant, contrived, artificial, cloying experiences I've had at the movies," the Entertainingly Hateful Review has become a mainstay of internet film criticism. Critics compete to be the cleverest/hatingest/adjective-ing-est reviewer to dump on the culturally-sanctioned Bad Movie (Transformers or Battleship or Grown Ups 2). 2 Guns seems like a natural target.

But four days after seeing the film, any anger I could have towards 2 Guns has faded into . . . just emptiness, I think. I don't even really want to talk about the movie, because the movie isn't bad in a way that's fun to talk about. It's just aggressively shallow and transparently nihilistic. In 2 Guns, the abyss doesn't just stare back, but it tags along with you after you've quit staring. It is, form and content both, profoundly hollow. And not only does it advocate for almost universal meaninglessness, it seems to revel in it.

Denzel Washington and Mark Wahlberg, as dirty secret agents, collaborate to rob a bank at the behest of their respective authorities (and neither one knows the other one is affiliated with the U.S. government). But after their heist, they end up $39.125 million-ish dollars richer than they expected to be, which sets in motion what may be the most convoluted plot to plod across the big screen in years. The Navy is involved via Wahlberg, the DEA via Washington, and then appears the magnificent Bill Paxton as the regional director of the CIA. It's a convoluted mess of acronyms and plot twists that don't stop ... 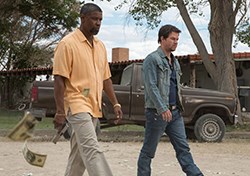