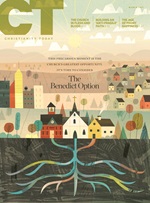 What is the role and mission of the church in times like these? For if the gates of Hell shall not prevail against it, as Jesus said (Mt. 16:18), one can presume that the church is not going anywhere, no matter how dire things external and internal are.

Christ’s body, with him as head, is the institution that ultimately matters, that binds and looses as does no other. That much our respondents no doubt agree on. But what exactly is the best way forward to renew the church and its mission? That faithful Christians disagree about the answer does not surprise us, but only suggests that the way forward is a beautifully complex and challenging one.