Christian scientist Francis Collins landed on President Bush's list of President Medal of Freedom awards, according to the Associated Press. The director of the National Human Genome Research Institute is being honored with the nation's highest civilian award for his leadership and for expanding the understanding of human DNA.

Collins is known for his discoveries of disease genes and his leadership of the Human Genome Project, which mapped and sequenced human DNA and determined its functions. He converted to Christianity after reading C.S. Lewis' Mere Christianity.

He also landed on Christianity Today's Book Awards 2007 for his book The Language of God: 'A Scientist Presents Evidence for Belief.

Not Too Simply Christian | Two approaches to apologetics. 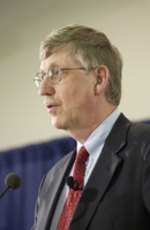