In an interesting interview with Relevant magazine, Oscar nominee Mickey Rourke talks about growing up in the Catholic church, a broken home that left him an angry young man, almost two decades of self-destructive behavior, an ongoing commitment to prayer, and the night he almost committed a murder/suicide before walking into a church and confiding in a pastor instead.

It was 1994, and Rourke's wife at the time, Carre Otis, was brutally raped while strung out on heroin. When Rourke learned who the perpetrator was, he grabbed a gun and wrote a suicide note, intending to kill the rapist and then himself. But en route, he felt a compulsion to enter New York's Church of the Holy Cross, where Father Peter Colapietro found a crying man, clearly in deep despair.

"I had reached a place in my life where living was living hard," Rourke told Relevant. "I was at a crossroads. . . . . I was ready to take care of business in a rather severe way and Father Peter talked me out of it, [asking me] 'Where ... 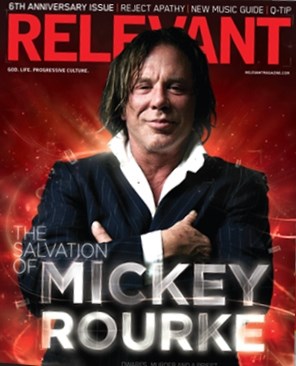