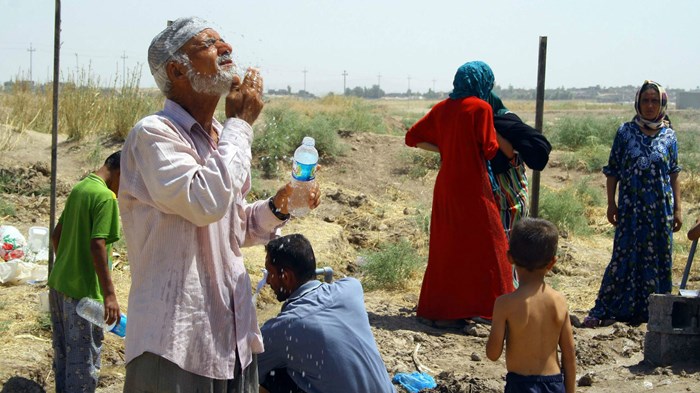 There are no Christians left in Iraq's second-largest city after a weekend ultimatum left Mosul residents with three choices: convert to Islam, pay jizya (a poll tax levied on non-Muslims), or die at the hands of the Islamic State of Iraq and the Levant (ISIS).

Mosul, home to the Old Testament prophet Jonah's tomb and the ruins of Nineveh, was intended by Iraq's government to anchor a future province where Christians could govern themselves. This past weekend, ISIS gave Christians until noon Saturday to choose between the three options. "After this date," read the ISIS declaration, "the only thing between us and them is the sword." The New York Times reports that, while a few Christians may remain in hiding after this weekend, Mosul's once diverse Christian community has likely come to a "real end."

The $250 poll tax ISIS imposed, prohibitively expensive for many Christians, sent more than 200 families fleeing Mosul even as ISIS militants confiscated their belongings, including cars, money, medicine, and food. Some journeyed 42 miles to Kurdish Tel Afar on foot, reports the Assyrian International News Agency (AINA), while some of the families went to Kurdish-held Irbil, or Dohuk, which is 87 miles north of Mosul, reports CNN.

After Mosul's Christian leaders did not attend a Thursday meeting ISIS called to notify them of Islamic rules to follow, ISIS leaders used vehicle loudspeakers to announce their ultimatum throughout the town, according to World Watch Monitor. Middle East Concern reports that ISIS earlier last week marked Christian houses in Mosul with the letter the phrase "property of the Islamic State" and an Arabic mark for "Nazirite."

Louis Raphael Sako, Chaldean Catholic Patriarch of Baghdad, said in a statement that the labels disrupted centuries of religious coexistence.

"This categorization based upon religion or sect afflicts the Muslims as well and contravenes the regulation of Islamic thought," he said. "With all due respect to belief and dogmas, there has been a fraternal life between Christians and Muslims. … Together they built a civilization, cities, and a heritage. It is truly unjust now to treat Christians by rejecting them and throwing them away, considering them as nothing."

Meanwhile, hundreds of thousands of Christian refugees have resettled in tent camps in Kurdistan, but the situation is less than comfortable. As temperatures reach 115 degrees, refugees have nowhere else to go and very few possessions, reports Al Jazeera. World Compassion, one organization offering aid to the refugees, is working alongside the U.N. to provide the Mosul refugees—and others—with food and other necessities.

AINA reports that 15 Assyrian families, some not healthy enough to flee the city, converted to Islam.

Mosul has grown into an increasingly dangerous situation for Christians since the ISIS takeover in mid-June, with militants destroying a statue of the Virgin Mary, and removing the cross from St. Ephrem's Cathedral, where the Syriac Orthodox archdiocese has its seat in Mosul. Militants even took sledgehammers to the traditional site of the prophet Jonah's grave, The New York Times reports.

"They did not destroy the churches, but they killed us when they removed the cross, this is death for us," one Mosul resident told the NYT.

The Daily Beast reports that ISIS leaders finance their campaigns by selling looted antiquities on the black market, so many historic artifacts from Christianity and other religions will likely disappear as ISIS militants continue their campaign.

"Those who claim to speak for a vengeful Allah take great delight in smashing idols wherever and whenever they can get to them," noted Daily Beast editor Christopher Dickey. "Theirs is a war of symbols."

Modern Mosul encompasses the site of ancient Nineveh, the city to which the Old Testament prophet Jonah was dispatched by God, an assignment Jonah tried to avoid until three days in a fish belly convinced him otherwise.

Two high mounds lay within the walls of Nineveh: Keyunjik and Nebi Yunus. The name of the latter denotes the tomb of Jonah; the traditional resting place of the prophet lies beneath a mosque on the mound. Because it is a holy site, it has not been excavated archaeologically.

Kuyunjik, on the other hand, has been the site of extensive excavations in the 19th and 20th centuries. Archaeologists uncovered the palaces of the Assyrian kings Sennacherib and Ashurbanipal. Reliefs from Sennacherib's palace, depicting the siege and defeat of Lachish (II Chronicles 32:9), are now on display in the British Museum.

Nineveh is mentioned as early as Genesis 10:11-12. It was the capital of the Assyrian empire during the seventh century BC, and its devastation was predicted by several of the Minor Prophets (Nahum 3:7; Zephaniah 2:13).

ISIS has come under international censure from religious leaders including Pope Francis, who expressed his concern for the Christians in the Middle East, "where they have lived since the beginning of Christianity, together with their fellow citizens, offering a meaningful contribution to the good of society."

In the first reported case of its kind, ISIS militants carried out the death sentence that Sudanese mother Meriam Ibrahim escaped by stoning a woman for adultery in northern Syria, reports AINA. The U.S. Embassy responded to the stoning in a tweet: "We condemn in the strongest possible terms ISIL's barbaric stoning of a woman yesterday in Tabaqa."

In Baghdad, Muslims have shown support for their fellow Christian citizens by attending a church service with Christians, reports the NYT.