The Wheaton College professor suspended for controversial comments on Islam and Christianity says she respects the evangelical institution for upholding its principles.

Larycia Hawkins spoke to the media in Chicago on Wednesday, wearing a purple headscarf as part of her pledge to wear a hijab during Advent in solidarity with her Muslim neighbors.

"I think Wheaton takes very seriously its role as a Christian liberal arts institution," she said, according to the Chicago Tribune. "And I respect the institution."

Hawkins was placed on administrative leave on Tuesday due to controversy over her recent comments that Muslims and Christians "worship the same God." She faces an inquiry into whether her comments violated Wheaton’s Statement of Faith.

Hawkins told the media that her comments didn’t violate that statement.

In a statement released late Wednesday night, the college said that Hawkins was free to wear a headscarf as an act of care and compassion towards Muslims.

But the school maintains that "compassion must be infused with theological clarity," and that Hawkins's comments about theology are in conflict with the school’s "distinctive Protestant evangelical identity." Wheaton stated:

In her most recent statement, Dr. Hawkins seems committed to her personal theological stance, as stated in social media posts and subsequent media interviews; she has not yet reconciled her beliefs with the College’s theological position.

The college said it placed Hawkins on administrative leave "in order to give more time to explore theological implications of her recent public statements concerning Christianity and Islam." It emphasized:

Contrary to some media reports, social media activity and subsequent public perception, Dr. Hawkins’ administrative leave resulted from theological statements that seemed inconsistent with Wheaton College’s doctrinal convictions, and is in no way related to her race, gender or commitment to wear a hijab during Advent. 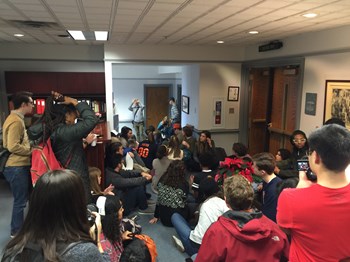 A group of students held a sit-in Wednesday at the office of Wheaton president Philip Ryken, who told them he affirmed their "right to disagree with a decision by the administration," according to the Tribune.

During the sit-in, students chanted, "Reinstate Doc Hawk." They also presented a letter asking for Hawkins’s reinstatement and an apology from Ryken, as well as Wheaton provost Stanton Jones.

"We believe there is nothing in Dr. Hawkins’ public statements that goes against the belief in the power and nature of God, Christ, or the Holy Spirit that the Statement of Faith deems as a necessary requirement for affiliation with Wheaton College," states the letter, which also praised Hawkins, the only African American woman with tenure on the Wheaton faculty.

Other students supported the suspension, reported Kirkland An, editor-in-chief of Wheaton’s student newspaper, for The Washington Post.

"The Christian faith is fundamentally different from Islamic faith, and although it’s admirable what Prof. Hawkins said, I’m in no position to try to advocate for her," sophomore Luke Nelessen told the Post.

Supporters of the school have begun to use the hashtag "#thankyouwheaton" in social media. A similar website was started recently as well.

That site claims to be run by a group of current students and alumni who want to counter criticism of the school.

"It seems that anything you do comes under fire from one group or another, but we are here because we just want to say thanks," a letter on the site reads. "Thank you for all your work in maintaining and directing Wheaton. You help shape something that is unlike anything else—an academically rigorous Christian liberal arts college that is dedicated to sound theology as well as excellent scholarship."

"Wheaton chose to make Hawkins an example of its commitment to orthodoxy, albeit an orthodoxy that Wheaton did not feel important enough to include in any statement until now," said Grant, a political science professor at Southern Illinois University. "What Wheaton should have done is update its statement of faith to make it clear."

The relationship between Islam and Christianity—and whether they worship the same God—has caused Wheaton headaches in the past.

In 2008, former president Duane Litfin signed a Christian response letter to "A Common Word between Us and You," a statement from 138 Muslim scholars and clerics calling for interfaith cooperation. Jones, Wheaton’s provost, also signed the document.

Both later dropped their endorsements.

Litfin told the school’s student newspaper that the statement implied that Muslims and Christians follow the same God.

"To speak unqualifiedly of 'our common love for God,' as if the Quran’s Allah and the God and Father of our Lord Jesus Christ are one and the same, and as if what it means to ‘love God’ in these two faiths means the same thing, is to say more than I am willing to grant," he said.

Other signers of the Christian response in 2008 were Bill Hybels, Rick Warren, and Yale theologian Miroslav Volf.

In defending her comments on social media, Hawkins pointed to Volf’s work.

Volf tweeted that "the claim that Muslims & Christians worship the same One is fully compatible with Wheaton's Statement of Faith!"

Volf made a similar argument while speaking at Wheaton in 2011.

"My statement is that there is sufficiently similarity between Muslim and Christian conceptions of God, so that we can say that they worship the same and similarly understood God," he told students, "which provides the basis for very significant common values."

Citing Volf's speech, Grant noted in his defense of Hawkins that "Wheaton does not endorse every speaker who comes to campus, but one could excuse a professor who borrows a phrase spoken from a theologian Wheaton brought to campus to speak on how Christians should interact with Muslims."

In an op-ed published on Thursday in the Post, Volf argues that Hawkins’s "suspension is not about theology and orthodoxy. It is about enmity toward Muslims." He writes:

Why is the Christian response to Muslim denial of the Trinity and the incarnation not the same as the response to similar Jewish denial? Why are many Christians today unable to say that Christians and Muslims worship the same God but understand God in partly different ways?

On his blog, McKnight re-published part of a review he’d done on Volf’s book, Allah: A Christian Response.

In it, he referred to Volf’s claim that Allah and the God of the Bible are similar enough to be called the same God.

He acknowledged that Muslims and Christians have some similar beliefs about God. But neither Christians nor Muslims worship a generic God, wrote McKnight.

"I have said this before and will say it again: we can agree to some degree at a generic level, but we don’t worship God in the generic," he said. "We worship either the God of Abraham and Moses, the God of our Lord Jesus Christ, or the God of Mohammed. The God in each of the faiths is understood differently enough to conclude that saying we worship the 'same' God muddies the water."