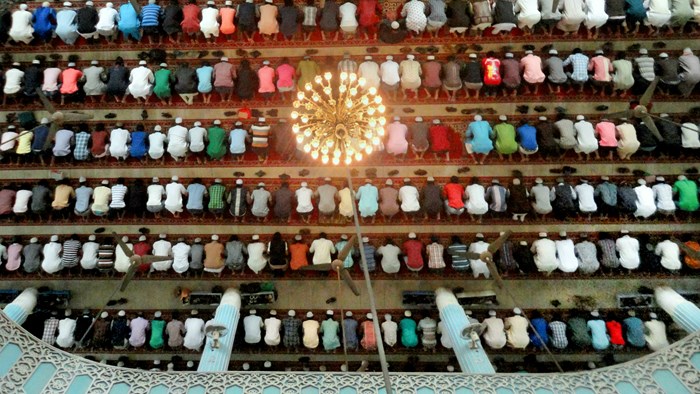 Image: Shaeekh Shuvro / Flickr
Prayers at a mosque in Dhaka, capital of Bangladesh.

Update (Mar. 28): Bangladesh’s highest court won’t be resolving the current tension in the country’s constitution that makes it both a secular state and an Islamic one.

In less than two minutes, judges dismissed a 28-year-old challenge to Islam’s designation as the state religion. The original group of 15 petitioners, 10 of whom have since died, had no standing to raise the issue, justice Naima Haider ruled. The three-judge panel didn’t allow any arguments or testimony.

“I’m very disappointed. This case was our baby,” said Subrata Chowdhury, the attorney who filed the petition in 1988, according to The New York Times. “I’ve never seen anything like this. At least a proper hearing should have taken place. We had prepared so much.”

ISIS claimed credit today for stabbing to death a Christian convert in Bangladesh as a “lesson to others.”

The attack by Islamist extremists was the latest incident to raise concerns over the Muslim-majority South Asian nation’s official relationship to Islam. This weekend, its highest court will hear a petition for more distance.

When military leaders added Islam as the state religion in Bangladesh’s constitution in 1988, opponents promptly filed an objection with the country’s Supreme Court.

On March 27, the court will finally hear arguments that Bangladesh should return to the secular state it was when it gained independence from Pakistan in 1971. The country is about 90 percent Muslim and 8 percent Hindu, with Christians and other religions filling the remaining 2 percent.

The original 1988 filing was dropped when it was realized “that the bench would not be favorable to us,” petition organizer Shahriar Kabir told Reuters.

When prime minister Sheikh Hasina came to power in 2009, she led efforts to tone down Bangladesh’s Islamic identity. The constitution was amended to declare that the state couldn’t grant “political status in favor of any religion,” as well as to ban “the abuse of religion” and “any discrimination against, or persecution of, persons practicing a particular religion.”

But the constitution still declares that “the state religion of the republic is Islam,” which is what the secular activists now before the Supreme Court find objectionable.

In addition, they argue that the Islamic designation has been used to rationalize recent violence against Christians and other non-Muslims.

“Minority groups in Bangladesh continue to face discrimination in the law, in society and in treatment by enforcement agencies,” stated Jubliee Campaign and Christian Solidarity Worldwide in an oral statement to the United Nations this month. “Last year’s multiple attacks on Shia mosques, Hindu temples and threats to Christian church leaders are reflective of the ongoing struggles for religious minorities in Bangladesh. Increasing number of violations on freedom of expression are also concerning, indicated by attacks on bloggers and publishers of secular material.”

In 2001, a bomb killed 10 during a Roman Catholic church service, worrying the Christian community. In 2004, the State Department cited Bangladesh for “state neglect” over the persecution of minorities. The next year, extremists beheaded a lay pastor and evangelist, and later hacked to death two Christian men after they showed the Jesus film in their village.

Bangladesh is No. 35 on Open Doors’ 2016 World Watch List ranking of where it’s hardest to be a Christian.

“There are fatwas implemented all over the country, especially in rural areas, and there are demands to introduce Shari’ah law in order to show that the country belongs to the ‘House of Islam,’” Open Doors reports. “As the Christian minority is growing, it faces more and more restrictions and challenges. This pressure is not driven by the government, but by radical Islamic groups, local religious leaders, and families.”

Though the secular democratic Awami League party handily won the last election with nearly 80 percent of the open parliamentary seats, radical Muslims attacked Christians on voting day and at least 18 people were killed.

While Islamist hardliners threatened protests if the Supreme Court sides against the state religion, Christians and some moderate Muslims are welcoming the potential change.

“Since 1988, we have been opposing Islam as the state religion. Religion is a personal matter and a democratic state can’t have an official religion,” Nirmal Rozario, secretary of the Bangladesh Christian Association, told ucanews.com. “This is nothing but an effort to dominate other religions in the country. It must stop.”