Support for Christians Refusing to Serve Same-Sex Weddings Goes ... Up

Support for Christians Refusing to Serve Same-Sex Weddings Goes ... Up

In the wake of Masterpiece Cakeshop’s victory at the US Supreme Court, a new survey finds that public support is increasing both for conservative wedding vendors like Colorado baker Jack Phillips and for same-sex weddings like the one he refused to serve.

A survey conducted by PRRI after the high court’s controversial ruling in June found that public support for same-sex marriage has never been higher, with 64% of Americans now approving of its legality. Yet PRRI also found that Americans are increasingly sympathetic to service refusals by bakers, caterers, florists and other small business owners with conservative religious beliefs.

PRRI found that 46 percent of Americans believe owners of wedding-related businesses should be allowed to refuse their services to same-sex couples based on their religious convictions, while 48 percent of Americans believe business owners should be compelled to provide their services to such couples with no conscience exemption from antidiscrimination laws.

Whose views have changed most: people of color.

While the views of white Americans have not changed year over year—49 percent approve of the religious right to refuse service—Americans of color are increasingly sympathetic to wedding vendors like Phillips. Nearly half of black Americans (45%) now support the religious freedom of business owners to refuse service to gay couples—a “significant change” from the 36 percent who expressed support in 2017. Similarly, among Hispanic Americans, 34 percent now favor the business owners, compared to only 26 percent last year.

Such racially disparate perspectives on religious accommodation laws may have their base in history, said attorney and AND Campaign founder Justin Giboney in CT’s roundup of African American reactions to Phillips’s victory.

“Unfortunately, American Christianity has a history of using its faith as a pretext or even justification for bigotry and hate. African Americans have often been on the receiving end of this practice,” said Giboney. “… It’s not surprising that black Protestants are more likely to believe vendors should serve same-sex weddings than their white counterparts. We might agree theologically, but historically speaking, we have little reason to believe the concerns aren’t pretext for prejudicial impulses.” 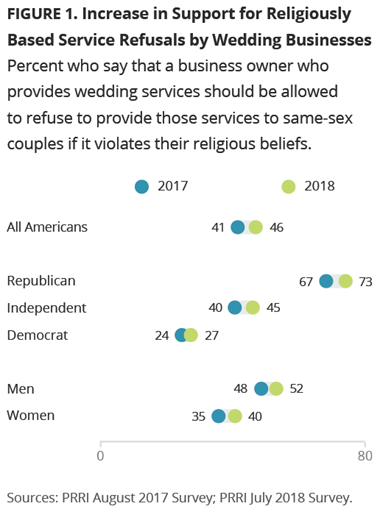 PRRI found that white evangelicals continue to show the strongest support for conservative wedding vendors (70%), while more evenly split are white mainline Protestants (48% vendors vs. 45% same-sex couples) and black Protestants (49% vs. 44%). In contrast, a slight majority of Catholics (58%) and the religiously unaffiliated (58%) believe that wedding vendors should not be allowed to refuse service.

PRRI’s 2018 findings are similar to what the Pew Research Center found in 2016, when Americans were also evenly split over whether wedding vendors should be required to serve same-sex couples (49%) or should be able to decline on religious grounds (48%).

However, Pew found that black Protestants (most of whom identify as evangelical) were twice as likely as white evangelicals—46 percent vs. 22 percent—to say businesses should be required to accommodate gay weddings. Among weekly worshipers, the difference was even more stark: 43 percent of black Protestants said businesses must provide services to same-sex couples; only 10 percent of white evangelicals said the same.

Pew also examined the amount of sympathy that each side had for the other in 2016, and found about a three-way split: 31 percent of Americans sympathized only with the conservative wedding vendors; 36 percent only sympathized with the same-sex couples; and the remaining 1 in 3 Americans felt sympathy for both sides (18%) or neither (15%).

Because of the Supreme Court’s 7–2 Masterpiece ruling, which was narrow in its outcome, controversy over religious accommodation laws is likely to continue. And religious liberty legal analysts were divided over how much the Supreme Court’s ruling would actually help other Christian businesses.

“It was significant that the court decided the case on the basis of the free exercise clause,” Eric Rassbach, vice president and senior counsel at religious liberty firm Becket, told CT after the ruling.

“What this means as a practical matter is that in a variety of situations it will matter much more what the legislators, adjudicators, and government officials say about the religious beliefs and practices in question, and much less what those same officials think about whether those religious beliefs and practices offend someone,” said Rassbach. “The court used a fairly broad definition of what constitutes hostility toward religion, so referring to ‘hateful beliefs’ could get an anti-discrimination law invalidated. And saying that someone was offended will be no justification for a law.”

Perhaps because of historical discrimination affecting their community, as Giboney noted, 63 percent of black Americans oppose small businesses in general denying service to LGBT customers on religious grounds, compared to only 44 percent of white Americans.

CT’s Quick to Listen podcast examined how courts are not the solution to resolving the impasse between advocates of religious freedom and LGBT rights.