Secretary of State Mike Pompeo explains to CT why the State Department invited 100 nations and 1,000 participants to its second Ministerial to Advance Religious Freedom.
Interview by Jeremy Weber
July 17, 2019 10:29 AM 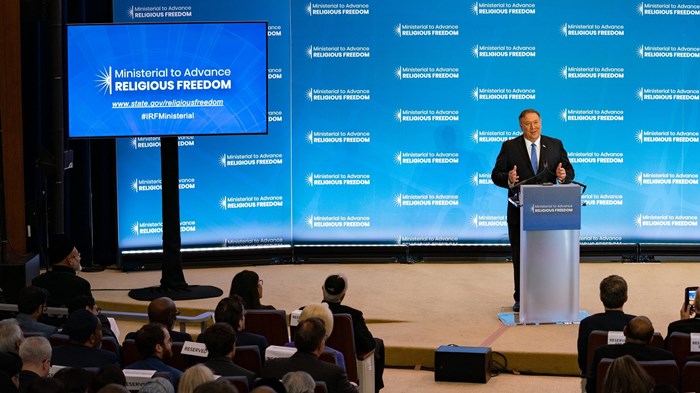 Image: US Department of State
Secretary of State Mike Pompeo addresses the second Ministerial to Advance Religious Freedom on July 16. 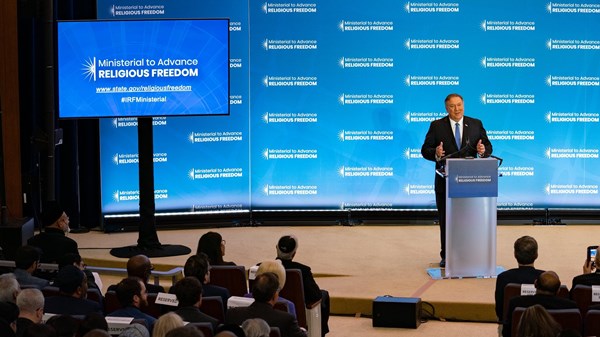 Pompeo: Why We’re Hosting the World’s Biggest Event on ...

This week, the US State Department invited more than 100 countries to come to DC and discuss how to stop the dramatic decline of religious freedom worldwide.

CT: Why hold a second ministerial on religious freedom?

Pompeo: This is America’s first freedom, and we want to work to make sure other countries understand how central it is to the individuals that are in their country to have the opportunity to worship as one chooses or chooses not to worship, and to know that their government is not going to restrict, impose, impede, or punish those activities is central to human dignity. And so we believe that here at the State Department, we can lead this conversation. We can encourage other countries to recognize this most fundamental human right. And when we do so, we will make life better for millions and millions of people around the world.

What successes came out of the first ministerial?

We saw a couple of things. First, we saw a marked increase in the level of discourse around this as a central right. Lots of conversations. It spurred satellite groups and others to hold similar related conversations inside their own countries. In November of 2018, we sponsored something with the United Kingdom; in February 2019, the United Arab Emirates hosted a conference to discuss the challenge of promoting interfaith understanding. The list is long. There were examples in Taiwan and other places where the elevation of the conversation has taken place. And we’ve actually seen governments continue to increase the place they put, inside of their own decision-making process, the central notion of religious freedom. There is more work to do, for sure, which is why we’ll hold the ministerial again this year. We think this is an ongoing process that is very, very important.

Between this ministerial and last year’s, what’s been improved upon or changed?

We think two things. One, we think there’s an even greater focus. The work that’s been done in the run-up to this ministerial has been enormous compared to the one last year. I think in some sense, because it was the first one last year, I think a number of countries didn’t know precisely what to expect. And I think some suspected there were ulterior motives that just don’t exist. So we saw a much higher level of engagement and preparation for this year’s meeting, and we think we’ll get an even better outcome. Second, this is bigger. There are more countries that will attend this year and will do so at higher levels. We think, too, following this second ministerial, we’ll even see more activity take place in many of the countries that have traveled here to participate in this.

How do you respond to concerns that a whole ministerial solely dedicated to religious freedom impacts the State Department’s focus on other human rights?

I’m convinced we can do more than one thing at a time. This is an important freedom, for everyone. We’re focused on it. It doesn’t exclude the State Department’s efforts across a broad range of human rights. So, holding this religious freedom ministerial in no way diminishes or excludes our capacity to continue to push other human rights. I think you’ve probably seen the Unalienable Rights commission that we’re going to begin to move out on here in the next month or two. It’s looking at a related issue, which is to define appropriately for our time the set of basic human rights that are inherent in each individual human being, and then to begin to articulate—consistent with our founding principles here in the United States—how the State Department ought to support that fundamental set of unalienable rights for everyone.

Last month, you elevated the status of the Office of Religious Freedom. Why?

We did, and we did the same for the monitor for combating anti-Semitism. When leaders identify things that are real priorities, I think that helps institutions like the State Department. And folks around the world will see it too. These are very, very important fundamental rights and the work on anti-Semitism is essential. We see the risk around the world for that. So elevating those two [issues]: First, I think it signals appropriately where they fit into the priorities for the Trump administration; and second, it will provide some incremental resources for them so that they can perform their mission even more effectively.

In the wake of last year’s ministerial, Uzbekistan was removed from the list of Countries of Particular Concern, though many advocates still rank them high on religious freedom violations. Why remove them now?

At last year’s ministerial, there was a focus on Andrew Brunson. I imagine it must be very pleasing to have him officially on this year’s program as someone who’s now released?

It is. It’s fantastic, and we’re looking forward to hearing from Pastor Brunson during the ministerial. It also reminds us of the work that remains ahead, and of others that during this year we were unable to get released; those that were detained during this year as well. So it is the case that you want to celebrate successes and you want to talk about the good work that’s been done, and then you want to learn from the processes that helped achieve those good successes. At the same time, it reminds you that the challenge—the threat to religious freedom around the world—remains. So we must remain diligent to continue to work hard at it.

A number of religious freedom advocates have concerns that while persecution is on the rise worldwide, America’s acceptance of refugees from the same nations has dramatically decreased. How do you respond to concerns that the US is closing off one of the avenues that people of minority faiths have to escape their persecution?

This administration appropriately is incredibly proud of how we treat those who are at risk around the world. I think there’s no nation in history that has accepted as many refugees as the United States has, nor whom has an even broader acceptance of people coming from around the world—both to come here to study and to learn, but those who want to come here permanently as well. Our focus here at the State Department has been to do our level best to do what we believe these people actually want: to help them stay inside of their own country, to deliver them goods and services and benefits, and to help shape their government policies in ways that permit them not to have to flee the country but allow them to exist safely and securely inside of their own country. And we’ll talk about that some in this ministerial as well. But I’m proud of what this administration has done with respect to taking care of the least among us around the world.

The latest IRF Scorecard by Wilberforce21 found that the top religious freedom advocates in Congress are quite bipartisan, yet out of 115 pieces of related legislation, only 6 were brought to a vote and passed. What could be done to make IRF legislation less partisan and quicker to pass?

That’s a good question. Through my time in Congress, I saw that there was broad, broad bipartisan consensus for religious freedom, and I hope that we can continue to work in that vein. The Trump administration certainly works closely with Democrats on Capitol Hill as well as with Republicans to get this right—to get this legislation right. As for how to convince the leaders on Capitol Hill to move that legislation forward, I’ll leave that to them. But I hope everyone will recognize that this administration will be incredibly supportive of those efforts by the legislature to push bipartisan international freedom legislation across the board.

Recent reports have shown an increase in the persecution of Christians worldwide. How does the State Department balance concern for Christians experiencing religious freedom violations without over-identifying Christianity—or them—with the US?

As I said at the outset, you’ll see leaders from nearly every religious faith here at the ministerial. We are equal opportunity when it comes to ensuring that religious freedom is protected. The data you described about the risk to the Christian faith in certain parts of the world is real. There is enormous Christian persecution in many parts of the world. As you know, we work diligently to make sure that those individuals, those human beings, have the capacity to practice their faith that they have chosen—in this case, Christianity. But you watch, too, this administration work on behalf of Muslims or the work we do on anti-Semitism. We want every person of every faith to have the capacity to practice their faith or choose not to.

Is the issue of religious freedom of personal interest to you?

It is. Look. I’m a Christian evangelical believer. This is something that’s been important in my life and the life of my family, and I have had the enormous benefit of being a citizen of the United States of America where I’ve been able to practice my faith personally and freely. I separate that from my obligation as Secretary of State, to the Constitution and the support and protection of all Americans. And I think this notion that has been so important in my life personally means for me—when I travel around the world and I see people who are living in nations where they don’t have that same blessing, that same opportunity to practice their faith—I think is something that does resonate with me.