A decade of analysis from Pew details what global faith leaders already know: From China to Europe, from the Middle East to the US, persecution is climbing.
Griffin Paul Jackson|July 15, 2019 04:00 PM
Image: Daniel Berehulak /Getty Images
Good Friday in New Delhi, India.
No Matter Where You Are, Religious Freedom Is Getting Worse

Ahead of a US State Department gathering being touted as “the biggest religious freedom event ever,” a new report showcases how persecution is getting worse—especially for Christians, the most-harassed religious group in the world—and becoming more widespread.

Hostility against religious minorities spans longstanding hotspots in the Middle East and North Africa to Western contexts in Europe and the Americas, according to a comprehensive analysis released today from the Pew Research Center.

Christians endured more pushback than any other religious group each year from 2007 to 2017, when they faced harassment in 143 countries (that’s one fewer than in 2016, but markedly higher than before), researchers found.

“There is no common theology in this discussion, but it is towards a common human right,” Brownback said of the event, which is expected to draw up to 1,000 religious and civil society leaders from around the world. “And that human right is that everybody is entitled to be able to practice their faith peacefully and without fear.”

The recent Pew release builds on earlier reports that looked at year-over-year change and offers a decade-long picture of religious freedom’s global decline—and the need for greater political action to curb the trend. 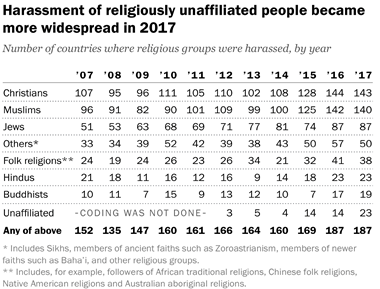 Christians remain the largest and most harassed faith community, but Muslims are not far behind, with reports of political or social oppression in 140 countries in 2017. Jews, the third-most targeted group, were persecuted in 87 countries, despite having a disproportionately smaller population (14 million) than Christianity (2.3 billion) and Islam (1.8 billion).

The religiously unaffiliated actually saw the largest rise in harassment over the period of the study, hitting a 10-year high in 2017, the most recent year for which data were available.

“Over the decade from 2007 to 2017, government restrictions on religion—laws, policies and actions by state officials that restrict religious beliefs and practices—increased markedly around the world,” stated the researchers. “And social hostilities involving religion—including violence and harassment by private individuals, organizations or groups—also have risen since 2007.”

The most recent data indicate that 52 governments, more than 1 in 4, imposed “high” or “very high” levels of religious restrictions two years ago, up from 40 in 2007. The highest levels of social hostility involving religion were reported in 56 countries by the end of the study, up from 39 at the start.

Big countries like China, Indonesia, and Russia are some of the worst offenders. And Christians are the biggest target.

By the end of the study, China, for instance, had boosted efforts to detain and deport Christian missionaries. And in just the last year, reports from the State Department, the US Commission on International Religious Freedom, and the World Watch List have called out China’s dimming record as a violator of religious freedom, citing everything from the shuttering of hundreds of churches and a ban on buying Bibles online to the detainment of up to 2 million Uighur Muslims.

Religious restrictions are rising everywhere, but fastest in Europe

The Pew report uses two 10-point indices to gauge levels of religious repression, one of which measures government restrictions and the other social hostilities. Both metrics are further divided into four categories for a total of eight measuring sticks for religious freedom.

Besides “interreligious tension and violence,” all other measures spiked between 2007 and 2017.

The biggest rise comes in the category of “hostilities related to religious norms,” which refers to harassment and antagonism around things like women not abiding by religious dress codes.

Religious freedom violations are most severe in the Middle East and North Africa, but restrictions and harassment are climbing everywhere. Europe saw the biggest jump in restrictions, with its score doubling over the decade of the study.

Legal limits on religious activities, like efforts to restrict proselytizing and male circumcision, are up dramatically in the continent. In 2007, five countries in Europe had restrictions on things like religious dress and religious symbols. Ten years later, 20 European countries had codified such restrictions. 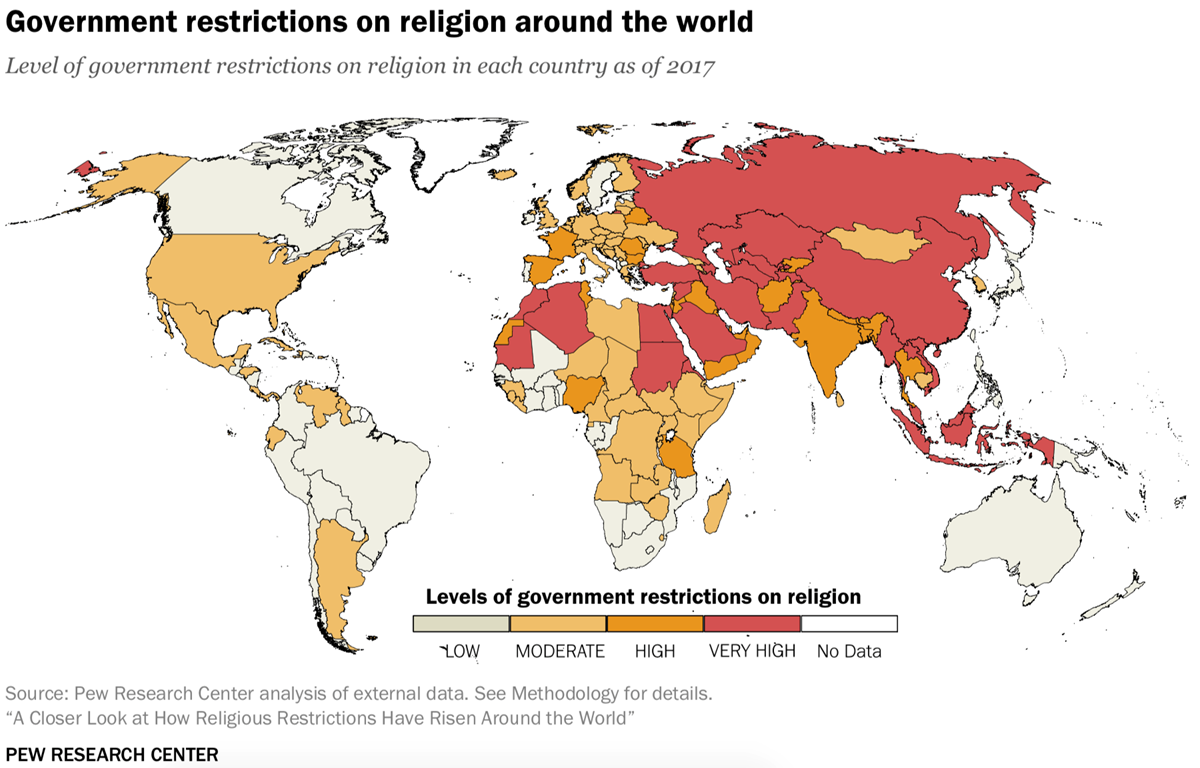 China has some of the strongest limits on religious activity, and MENA has the worst government harassment, but social hostilities are increasing fastest in Europe, with its score in this category more than quadrupling from 2007 to 2017.

Islam is the most common state religion: 27 of 43 countries with official religions are Islamic. Just a handful of countries (Greece, Iceland, the UK, and Samoa) make special concessions and offer perks to Christianity not offered to other faiths.

According to Pew’s findings, in only 26 countries (13%) are all religious groups “generally treated the same.”

While regional interreligious tension and violence decreased or stayed the same, it still grew in certain countries like Syria and Ukraine.

The State Department’s summit aims to combat this sort of interfaith feuding. “We want to see really a global grassroots movement around religious freedom,” said Brownback. “We want to get the various faiths to bind together and to stand for each other’s freedom of religion.”

Religious freedom is best in the Americas, but it’s slipping

In all categories, the Americas was the region with the fewest restrictions and hostilities. But even there, all measures point to rising levels of harassment and repression.

Over the period of the study, the number of countries in the Americas with noted government restrictions on religious activities increased from 16 to 28.

In the United States specifically, limits on religious activity and individual or social group hostilities based on religion increased dramatically between 2007 and 2017.

More than 8 in 10 (82%) Americans cite anti-Muslim discrimination in the US, according to a separate Pew study released earlier this year. Anti-Semitism is also up sharply in recent years, especially in the shadow of the shooting at a Pittsburgh synagogue that killed 11 late last year and a significant rise in hate crimes targeting Jews.

Even Christians are feeling the effect of threats to religious freedom, both social and political. A full half of Americans believe evangelical Christians are subject to discrimination in the US, up 8 percentage points from 2016.

Around the world, the share of countries with high levels of social hostility is ticking upward. Overall restrictions on and hostility toward religious groups remains a significant challenge as, in 2017, 83 countries (42%) reported “high” or “very high” scores in these categories, a figure that remained the same between 2016 and 2017 and falls just below the 10-year high of 43 percent in 2012.

Among the 25 most populous countries, home to more than three-quarters of the global population, China, Iran, Russia, Egypt, and Indonesia have the harshest government restrictions based on religion. The freest of these big countries in terms of religion are South Africa, Japan, the Philippines, Brazil, and South Korea. The United States falls closer to the middle of the group.