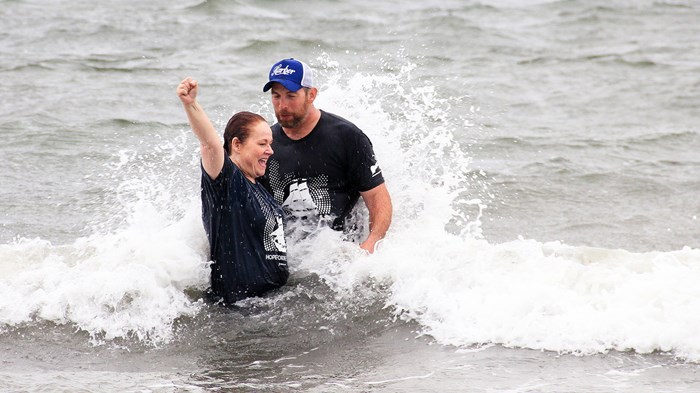 Weather permitting, 10 members of a new Southern Baptist church on Cape Cod will be dipping in the ocean this weekend, but it won’t be for a typical swim

On “Baptism Sunday,” a newly designated day on the Southern Baptist Convention’s calendar, Harbor Church’s baptismal candidates—wearing T-shirts decorated with an anchor and the church's “Hope for the Journey” tagline over their beachwear—will be immersed by Pastor Josh Adams in the waters of the Atlantic Ocean as a sign of their obedience to God.

“Baptism is a beautiful outward expression of an inward decision that people have made,” said Adams, who started his church in Hyannis, Massachusetts, three years ago. “That opens up the door for hopefully those people sharing their testimony from then on—this is what God’s done in my life and how he’s made a difference.”

But fewer members of the nation’s largest Protestant denomination are availing themselves of the ritual of late. Reported baptisms among Southern Baptists have declined in eight of the last 10 years and dropped by more than 100,000 since 2009, according to the SBC’S Annual Church Profile.

With 76 percent of constituent churches contributing information—the annual profile counted 246,442 baptisms—its the lowest reported number since 1950. That compares to 349,737 in 2009. The highest-ever reported number of baptisms was 445,725 in 1972.

In an August column in Baptist Press, SBC President J. D. Greear responded by urging Southern Baptist pastors to renew their focus on the rite that is, after all, part of many churches’ names.

“Baptism Sunday will be an opportunity for thousands of people in our churches to take their step of obedience and faith,” Greear wrote. “Many of them already know they should be baptized, and you can schedule baptism celebrations in advance. Other people in your churches may decide on Sept. 8th that God is calling them to those same baptismal waters.”

Baptist historian Bill Leonard said that baptism has long been a trademark of Southern Baptist evangelism, but the plummeting numbers have been a source of distress for conservatives who have led the denomination since their resurgence, or takeover, in the late 1970s and 1980s.

“The lengthy declines in those numbers are a serious spiritual, demographic, and theological crisis for the denomination, so it is no wonder that Rev. Greear is emphasizing baptism, also as a way of reminding churches that they should reclaim their emphasis on conversion and baptism,” said Leonard, professor of divinity emeritus at Wake Forest University School of Divinity.

But, Leonard added, “While having one Sunday to emphasize that important ministry of the church is helpful, it's a spiritual flash in the pan without a long-term recommitment to their calling.”

Adams, whose Cape Cod church is attended by about 320 people on Sundays, said he thinks the emphasis can make a difference.

“I think a lot of folks just don’t know the value of baptism, as churches try to become less traditional and get away from some of the things that people might find boring,” he said. “There’s elements like baptism that shouldn’t be left out. They’re a very important part of our faith.”

To help churches prepare for new baptisms, Greear developed a four-page “Baptism Service Planning Guide,” which has been featured since last month on the website of the SBC’s North American Mission Board, that notes, “the candidate should be able to articulate the gospel and explain what baptism means and why they want to do it.”

But Greear, who leads The Summit Church, a megachurch in Durham, North Carolina, and former SBC President Johnny Hunt have been promoting special Sunday services as opportunities to welcome both candidates who planned to be baptized and others who respond spontaneously. They pointed to the impromptu baptisms in the New Testament as justification for modern-day, on-the-spot use of church baptistries.

Hunt, currently serving as the NAMB’s senior vice president of evangelism and leadership, also appeared on a podcast that was released Sept. 3 about the theological and practical aspects of baptisms, including spontaneous ones. He described how his church, First Baptist Church Woodstock in northern Georgia, makes sure it has robes and white T-shirts and shorts in different sizes to be ready for those who might come forward.

“We eliminate all excuses,” he said. “We have extra hair dryers. We have everything that a man or a woman would need to be baptized. And we call them spontaneously, immediately. ‘Why don’t you come and settle this right now?’ And I have been absolutely amazed at the overwhelming number of people that respond.”

Some leaders are less inclined to go the spontaneous route but nevertheless said they supported the Baptism Sunday initiative.

Pastor Marc Hodges, of First Baptist Church Thorsby in central Alabama, decided to mark the designated day a week early when he baptized three children at his rural church. But he wanted to make sure they understood the meaning behind their actions well before they stepped in the water.

“It’s not that they go down underneath the water a sinner and come back up a saint, a Christian,” said Hodges, whose church draws an average of 180 people on Sundays.

“It pictures the death and burial of Jesus when they go down into the water, and it pictures his resurrection, and it points to the fact that you’ve been baptized, and you’re raised to walk in newness of life.”