The pandemic left families stranded, plans delayed, and some adoptions called off entirely, following a year of historic lows and increased government regulations.
Maria Baer|June 4, 2020 08:00 AM 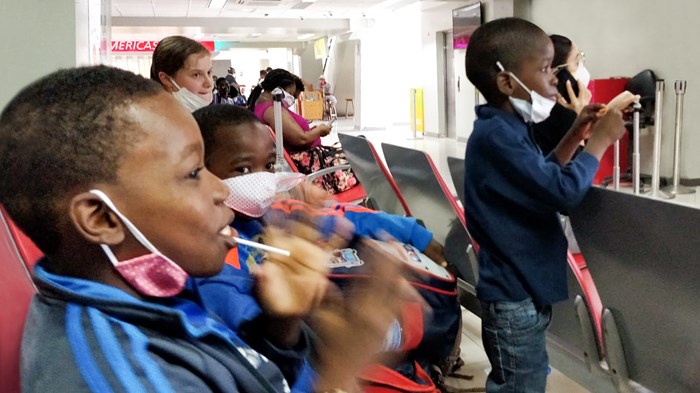 Image: Courtesy of the Cox Family

The last leg of Babydson and Jamesky’s journey to their new family in America was the long hallway at the Fort Lauderdale airport. The skinny-legged brothers, aged 8 and 7, were lugging big backpacks they’d packed at their orphanage in Haiti. They ambled timidly down the hallway until they were scooped up into Beau and Kari Cox’s hugs.

The Kansas couple—who felt called to adopt following a medical missions trip to Port-au-Prince—had been in the process for nearly three years before Babydson and Jamesky arrived on May 14. The coronavirus pandemic halted the process for them - along with hundreds of American families - at a time when international adoptions had already fallen to historic lows.

Even before the virus, adoption in Haiti was notoriously obstacle-ridden, delayed by political unrest, government corruption, incompetence, and lack of technology. Things got worse last year, sending the country in lockdown over violent protests and leading the US to advise against travel there.

“When the pandemic hit, we thought, ‘Can we even get them on a flight and get them out?’” Kari Cox said.

US embassies around the globe had either closed outright or continued operations with skeleton crews, and the Haitian government grounded nearly to a halt. To get the boys home now, the Coxes had to hope for a series of small miracles. A sign-off from Haiti. A passport and a visa from the US. A willing and dependable escort. A flight out. 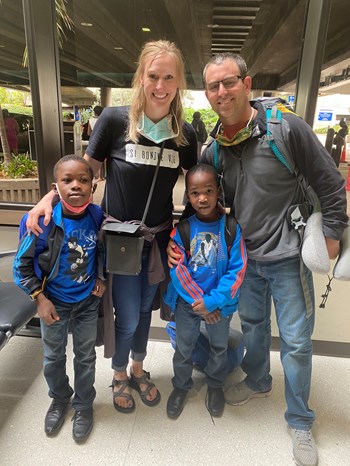 Image: Courtesy of the Cox Family

Somehow it all lined up. The Haitian government signed the last piece of paper, after weeks of promising they’d “do it soon.” An administrator at the boys’ orphanage found an American missionary teacher outside Port Au Prince who was going home to Pennsylvania and could fly with them. The Coxes booked a flight to Fort Lauderdale, where Babydson and Jamesky were scheduled to land. They got on the plane without knowing whether the embassy had granted their sons’ visas and exit letters.

The Coxes joined five other families at the airport, meeting their adopted children from Haiti. After years of worrying the constant holdups would stall the process indefinitely, “that was kind of the first time we could breathe,” Kari Cox said.

When Babydson and Jamesky arrived a couple weeks ago in Florida, it had been nearly a year since the Coxes had seen the boys. In the cluster of kids, some younger ones ran to their families. Kari struggled to make out her boys’ faces, then suddenly, there they were. “It felt like forever for them to get to us, to walk down that hallway,” she said. “It was really precious.”

The Cox family’s story is one of the happy ones. Some families have been forced to call off adoptions from abroad due to procedural delays caused by the pandemic. The rest are left with unknown timelines in a process already made more complicated by increased regulation in recent years.

While foreign governments in more than a dozen countries limited or did away with international adoptions for a variety of reasons, the US State Department intensified its regulations a couple years ago, in the hopes of preventing unethical practices in adoption and providing greater transparency and follow-up.

Those regulations have provided additional steps in what was already an arduous process. Now, the pandemic has stalled international adoptions nearly every stage, said Ryan Hanlon, a vice president at the National Council for Adoption (NCFA). Families waiting for approval to begin an adoption can’t schedule their required fingerprinting appointment with the now-closed US Citizenship and Immigration Services (USCIS). Families who have submitted paperwork are left waiting for document approval from a US embassy or a foreign embassy, many of which are also closed. Many countries require a court proceeding to finalize the adoption; courts are closed.

And, of course, families can’t readily travel overseas to either meet their adoptees (some countries, like Haiti, require a “socialization” visit before the legal process can begin) or to pick them up.

Hanlon said NCFA is aware of roughly two dozen US families currently stuck overseas waiting to bring their adopted children home. Most are in Africa, including Nigeria, Cameroon, Ghana, and Chad. Some are in Asia and Central America. They’re not waiting for flights; they’re waiting for paperwork.

“The reality is these families traveled well before the pandemic struck,” Hanlon said. “Had the Department of State done their job in a timely manner, they wouldn’t have been stuck.”

These hurdles are bound to affect the work of Christian adoption agencies and to come up in church prayer requests. Evangelicals are among the most avid supporters of adoption and are more than twice as likely than the general population to adopt a child, be involved with adoption-related causes, or know someone who has adopted from overseas.

A State Department official told Christianity Today that intercountry adoptions “remain a high priority,” but that the department does not know when routine visa services will resume overseas. The official said the department is prioritizing helping families who had already had a visa appointment at the embassies before the shutdowns, but are also trying to grant emergency appointments “as resources allow.” The agency recommended families turn to USCIS.

In cases where an embassy isn’t open to grant an adoption visa, USCIS, which falls under the Department of Homeland Security, could grant humanitarian parole as an exception. That would allow families to bring their kids home to the US and finish the visa process here.

Just one family working through Nightlight Christian Adoptions—the same agency that oversaw the Coxes’ adoption from Haiti—has been granted humanitarian parole to return with their child, while many others applied but are still waiting.

“The [State Department’s] Office of Children’s Issues said ‘Please, tell us all your families that are stuck and we’ll see what we can do,’” said Daniel Nehrbass, the president of Nightlight, “and then the response we got was, ‘There’s nothing we can do.’”

In addition to the frustration and economic hardship of not being able to return to a job in the states, the stalls brought on by the pandemic can put an adoption in jeopardy. Many countries have an age limit on adoption eligibility. Nehrbass knows of at least one family waiting to adopt a child from Hong Kong who has turned 14, meaning he has aged out of the process while waiting for his adoptive family to pick him up.

Because COVID travel restrictions kept the family from getting there, Nehrbass said officials in Hong Kong said they’d grant an extension. In a similar case in Honduras, the government won’t. That adoption—prayed and planned for for years—can no longer happen. “That is a tragedy for those kids,” Nehrbass said.

Nehrbass speculated one reason the State Department has increased regulation and seemingly slowed the international adoption process in recent years is the growing concern over human trafficking. “I think there is a narrative among some in the State Department that the risk of a child being trafficked, whether real or perceived, is such an injustice that it would be better to have no adoptions than… to crack open the door slightly,” he said.

Still, Nehrbass said the COVID-impacted interruptions to foreign adoptions aren’t all attributable to the US State Department. He estimated half of Nightlight’s families stuck overseas are waiting on foreign courts, ministries or embassies.

The Benik family flew from their home in Myrtle Beach, South Carolina, to Bogotá, Colombia in early March with the expectation they’d be leaving a few weeks later with their newly adopted 15-year-old daughter, Laura. They were waiting for a sign-off from the Colombian court system when the pandemic prompted the country to shut down.

“The first couple weeks was such a roller coaster ride,” R. P. Benik said. “Someone would say, ‘We expect to finish [your adoption] by the end of the week,’ and then you learn from someone else there’s no way it’s going to happen…at that point we were just kind of like, ‘We’re not going to worry about it anymore. We’re just going to hunker down together.’”

The Beniks’ lawyer said they could return to the US without Laura and try to come back later. “Every time they advised us to go home… we always tried to be wise and discuss it, but at the end of the day we were like, ‘We’re not leaving,’” Benik said.

They stayed stuck in Colombia for two months. They celebrated their youngest biological daughter’s second birthday and Laura’s 15th, her quinceañera, in lockdown together at a missionary house. They had groceries delivered. The Colombian government didn’t allow walks in the neighborhood. They watched, via online alerts, as weekly evacuation flights came and went.

At the direction of their lawyer, the Beniks sued the Colombian government to try to force them to hear their case—and it worked. The President of Colombia signed a decree allowing a government agency, instead of the closed court system, to sign off on the foreign adoptions of currently stranded families. After that, the US embassy granted Laura’s Visa in a single day. Embassy officials even came to the Bogotá airport to see Laura and her new family off on May 3.

Benik said his family was in touch with South Carolina Senators Lindsey Graham and Tim Scott throughout the process, and the COVID-19 pandemic has renewed some congressional advocacy on behalf of families waiting to adopt overseas.

In late April, the Congressional Adoption Caucus sent a letter to Secretary of State Mike Pompeo requesting information on how his department planned to help families caught overseas during the pandemic. The letter also urged the State Department to use “all available resources to ensure intercountry adoptions proceed in a safe and timely manner.” The State Department did not issue an official response.

It’s unclear what long-term impact the pandemic will have on international adoptions. The landscape was already in flux. In addition to the steep decline over the past 15 years, Bethany Christian Services—the largest adoption and foster agency in the US—announced earlier this year that it would end its international adoption program next year, and work with in-country partners to improve local child welfare systems instead.

It’s inevitable that the number of international adoptions in 2020 will fall below last year’s historic low—by how much, experts don’t know.

Nehrbass at Nightlight said when the shutdowns hit, he briefly hoped it would call attention to the dysfunction that already existed,“but it just didn’t work out that way,” he said.

He’s optimistic the crisis won’t weaken families’ resolve, especially as deaths from the pandemic are likely to leave more children without parents across the globe.

One of those hurdles now requires a vaccine.