The most popular topics for military Bible study are suffering, hopelessness, and loneliness.
Kate Shellnutt|November 11, 2020 10:30 AM 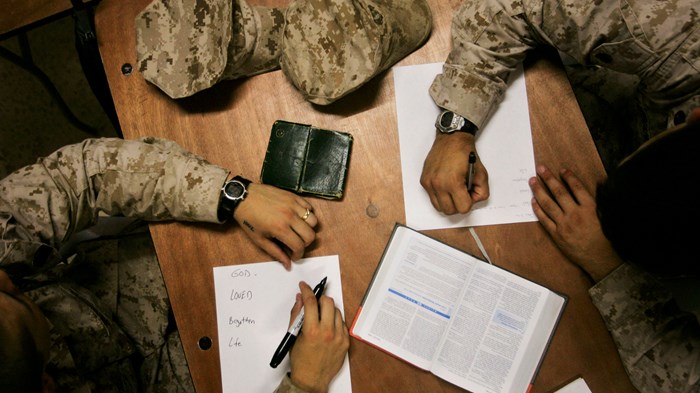 While a majority of military service members identify as Christian, the demands of active duty—frequent moves, long hours, and overseas tours of duty—can strain faith and family.

The American Bible Society (ABS), which launched a Veterans Day challenge to recruit a half million military personnel to engage in Bible study, has found that half of service members who open Scripture hope to find a message that addresses pain and suffering (51%), hopelessness (50%), and loneliness (48%).

According to the ABS’s State of the Bible survey with Barna Research, veterans and active duty service members (33%) are about as likely as Americans on average (31%) to read the Bible once a week or more. However, members of the military who have been deployed more often are more likely to engage Scripture.

Bible Gateway reported on the research, saying those deployed to combat zones were more than twice as likely to belong to the highest category of Bible engagement, “Bible centered” (10% of combat veterans compared to 4% of all service members). They were also less likely to fall into the “Bible disengaged” category (43% of combat veterans compared to 53% of those who did not see combat).

The ABS reports that it has distributed 60 million Bibles and related resources to members of the military.

Earlier this fall, the Department of Defense strengthened religious liberty protections for members of the military, implementing Religious Freedom Restoration Act guidance, and last year, the Department of Veterans Affairs revised its policies to allow religious symbols including Bibles to be displayed in VA facilities.

The religious makeup of the military broadly mirrors the population overall, with about 70 percent of active duty personnel identifying as Christian and about 25 percent not affiliating with any religion in particular.

However, the 3,000-member chaplains corps has skewed evangelical Protestant, with Southern Baptists being the most popular denominational affiliation. CT recently covered how a growing number of US military chaplains are foreign born, including 1 in 5 Army chaplains and 1 in 10 Navy chaplains.