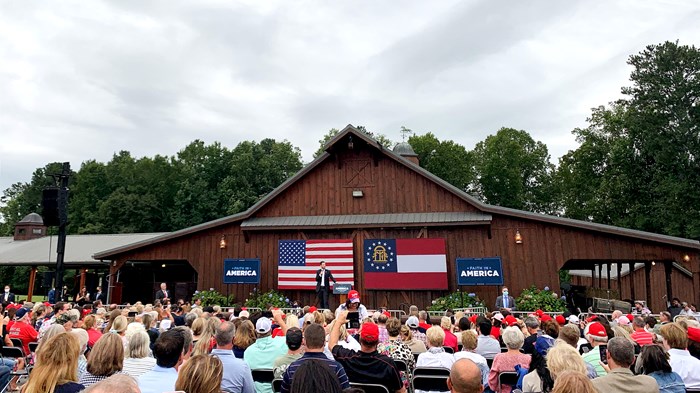 Joann Roberts had never been to a political rally before.

She prays for President Donald Trump every day and watches messages from his faith advisers online, including televangelists Paula White-Cain and Jentezen Franklin. When Roberts heard they would be speaking at a campaign event in Georgia, the Southern Baptist mom of three took off from her job as a hospital administrator and made the hour-long drive to a field in the far-flung Atlanta suburbs.

Wearing a neon pink shirt printed with the slogan “God, Family, Guns, and Trump,” she fit right in.

The 500-plus crowd at this week’s Evangelicals for Trump rally included local politicians, GOP organizers, and even an unannounced visit by Georgia Gov. Brian Kemp, but most were people like Roberts. They were veterans, retired couples, bikers, college students, and homeschool moms, all Christians who felt like this year they needed to do something more to show their support.

Several volunteers distributing hand sanitizer and masks (not required, but around a quarter wore them) said this was their first time working with a political campaign. They traded stories about going door to door for Trump and turning their guest rooms into makeshift call centers. They compared churches and voting districts. They offered compliments over their MAGA gear. “I got it at Ace Hardware,” one woman beamed when asked about her Trump 2020 mask. “They can’t keep them in stock!”

More than anything, these Georgia Christians gushed over what they had seen during Trump’s presidency: a leader who came through on his pledge to appoint conservative justices, defend religious freedom, and oppose abortion. “He really just kept his promises,” said Fred Engel, wearing a red plaid shirt and a volunteer lanyard around his neck. “I don’t remember a single politician in my 68 years who did that.”

“I believe my father was put here for a reason,” the younger Trump son said. “It was because of a higher deity and entity, and that’s why the evangelical community has rallied around him.”

Despite the white evangelical turnout for Trump before, it wasn’t quite like this last time.

“I believe most evangelicals—most pastors for certain—four years ago probably voted against Hillary Clinton. Four years later, many if not most are voting for Donald Trump,” said Chuck Allen, a local pastor who prayed to open the event. “That’s a significant difference.”

Polls back him up on the first part. A majority of white evangelicals who planned to vote for Trump in 2016 were driven more by their opposition to Clinton than by the appeal of Trump as a candidate, Pew Research showed.

But now, while Trump’s evangelical opponents are more vocal against the president’s polarizing rhetoric and America First policies, supporters instead say they have reason for more enthusiasm. They cite Trump’s conservative stances in office and the spiritual backing of several evangelical leaders who have had an open door to pray with him at the White House throughout his first term.

As sociologist Gerardo Martí wrote, Trump has made inroads with evangelicals “because he engages in actions in support of religiously defined group interests rather than as a result of statements of belief or piety of behavior.” Even with some slips over the first half of the year, more than half of white evangelicals (59%) still “very strongly” approved of the president as of this summer, compared to 29 percent of Americans overall.

The Trump campaign has set out to maximize that support. It amped up its evangelical outreach, beginning with a kickoff event in Miami at the start of the year featuring No. 45 himself and continuing with hundreds of local MAGA meetups and dozens of “prayer, praise, and patriotism” events ahead of the November election.

Leading the charge is the president’s pastor and top prayer partner White-Cain, who recounts how she has served as a spiritual adviser for the businessman-turned-politician for nearly 20 years and took on an official White House role in 2019. She brings along husband Jonathan Cain from the band Journey, leading to requisite references to “Don’t Stop Believin’” and “Faithfully.” At the event, he performed to an audio track of a worship song he wrote called “Freedom in Your Grace.”

The campaign has also enlisted fellow evangelical advisers and pastors like Franklin, whose son now works for the campaign; National Hispanic Christian Leadership Conference executive vice president Tony Suarez, who has joined four Evangelicals for Trump events so far this year; and Allen, who was enlisted to join an upcoming event in Phoenix after helping with the one in his area. 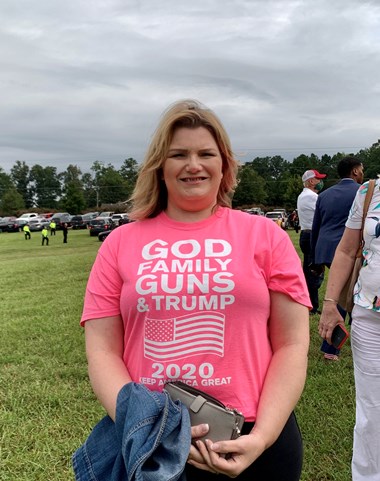 Evangelicals for Trump events are set up differently than the larger rallies for a broader Trump crowd, starting off with an invocation and familiar praise music. In a divisive and defensive election year, the gathering in Georgia this week, held outside a local barn event space, hummed with the calm relief of shared faith and shared politics. No rowdy factions. No snarky signs. No hollering or boos.

Attendees, seated in folding chairs spaced a couple feet apart, slowly swayed as they sang along to “This Is Amazing Grace” and “Way Maker,” performed by a stripped-down worship band from Allen’s church, a nearby nondenominational congregation with 4,500 attendees.

While the faith leaders focused mostly on the administration’s victories, Eric Trump criticized the “radical” protesters taking the streets in cities across the US and the decision for some states to allow businesses to reopen before churches.

There were four standing ovations for law enforcement, who were present at the event as security. The only reference to violence faced by black Americans—the inciting incidents leading to the recent protests—came from Franklin, who expressed frustration at false divisions: “It’s like if you’re for President Trump … that means you’re automatically not upset if you see a black man being beaten or choked to death in the streets. I stand for both. I stand for justice and righteousness.”

Perhaps the weather helped things feel particularly peaceful too. It was the coolest day all summer in the area—overcast, breezy, and 70 degrees. The invocation prayer referenced a “God-ordained” forecast.

Even when it began to drizzle, attendees stayed seated, applauding and waving when they noticed Eric Trump sneak out the side of the barn to jet off to his next campaign appearance and mm-hmming in agreement during closing prayers for Americans to vote for “life, faith, and freedom.”

The Evangelicals for Trump events emphasize a softer side of the notoriously combative president, with stories about the president’s faith and family alongside lists of political wins. White-Cain said “it was his idea” to call for prayer against the “evil” of coronavirus. Eric admitted that the Trumps went into the 2016 campaign “not knowing a damn thing about politics,” but they worked together as a family and “God got us here.”

Though he is a vocal Trump supporter, as a pastor, Allen recognizes the tension between the draw of the president’s conservative political priorities and the turnoff of his reputation as a bully.

“President Trump doesn’t make it easy for evangelicals,” said Allen, who built a rapport with Trump’s team during visits to the Mexican border two years ago and to the Bahamas after Hurricane Dorian last summer. “I wish you could see a more compassionate Trump that I believe sincerely exists, but there’s just so much bluster around him.”

Allen estimates that his nondenominational, blue-collar congregation, Sugar Hill Church, is about “60 percent Trump and 40 percent anyone-but-Trump,” but the Trump faction has become more eager to take a stand.

Sugar Hill, he said, has benefited from a Trump economy, its members boasting more jobs and more sales, even in recent months. (The statewide unemployment rate has fallen back down to 5.6 percent, better than the national average.) As a result, the church has been able to expand its ministry reach, launching new worship sites and supporting hundreds of families with rent assistance and meal distribution during the pandemic.

The coronavirus pandemic, of course, has become a top issue for voters, and it’s also shaping the way campaigns and elections are being held in 2020. While the Trump campaign has continued to put on in-person events to rally Republican Party faithful, the Believers for Biden outreach has focused on virtual events and discussions.

“I don’t think in-person events will affect mobilization per se, but these events seem to serve a purpose in reinforcing certain aspects of political identity,” said Daniel Bennett, chair of the political science department at John Brown University. “Specifically, those attending events like the Evangelicals for Trump event are telling the world they’re not afraid of COVID and won’t let a pandemic dampen their enthusiasm for the election. Biden faith events, being virtual, align with the Democratic narrative that the pandemic should be treated seriously.”

Evangelicals attending the Georgia event may have had their minds made up about Trump, but the rally urged them to become more involved in getting others to vote for him. “I felt like this was the last ‘charge’ I needed before the election,” said Roberts.

Kemp, the Republican governor who narrowly beat out Democrat Stacey Abrams in 2018, emphasized how individuals could make a big difference for Trump. He suggested attendees think of “10 people you know, from your church, your neighborhood” whom they might register to vote in Georgia. (“In person!” someone yelled from the audience.) 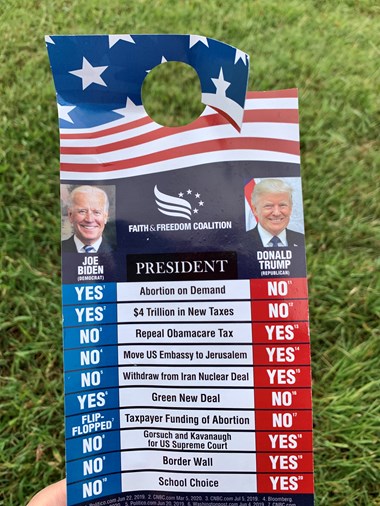 The coalition, which typically urges pastors to host a “Registration Sunday” with a voter registration booth in their church lobby, now also offers a video announcement with instructions for registering from home.

“Based on my research, activities in church like voter registration and get-out-the-vote drives are akin to small group activities run by a few for the benefit of many,” said Paul Djupe, a Denison University political scientist who has researched political activity by churches. “I suspect that such activities have collapsed during the pandemic, defaulting to online worship and little else.”

Djupe found that distributing voter guides—like the ones from the Faith & Freedom Coalition—was the most common get-out-the-vote effort by evangelical churches, whereas black Protestant congregations were more than twice as likely to hold voter registration events.

With 49 days to go before the election, Trump backers at Tuesday’s event disagreed over whether the president stands to win in a landslide or another close race, but many repeated the refrain that this was the most important election of their lifetimes. Eric Trump and Allen referenced the potential for additional Supreme Court appointments in the next term. Others expressed broader concerns about freedom of speech, freedom of religion, and the economy being threatened under a Democratic administration.

“I did not get into this to be a politician. I’m a preacher … But I knew if I remained on the sideline and silent, and if all the preachers remained on the sideline and were silent, something was going to happen in the direction of this nation that could not ever be changed back again,” said Franklin, who leads Free Chapel in Gainesville, Georgia.

Speaking to rows dotted with telltale red baseball caps, with “Great Is Thy Faithfulness” playing in the background like an altar call, the pastor offered a closing charge.

“In every election, we have a responsibility to vote our faith. I don’t go in the booth and leave Jesus on the other side,” he said. “If we vote, we win. If we don’t vote, we lose.”