With half of voters dissatisfied with both presidential candidates, white evangelicals primarily plan to oppose Clinton.
Sarah Eekhoff Zylstra|July 13, 2016 01:32 PM 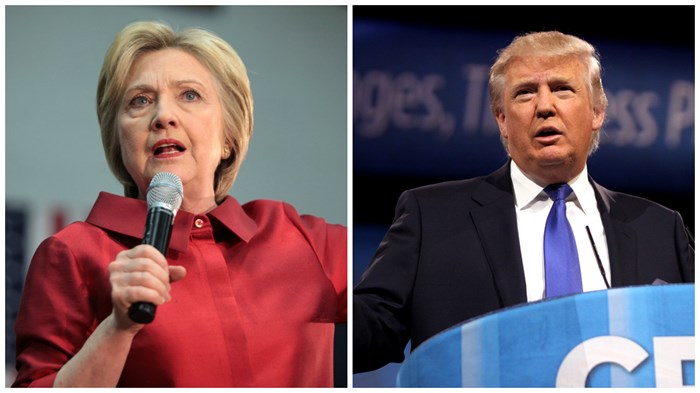 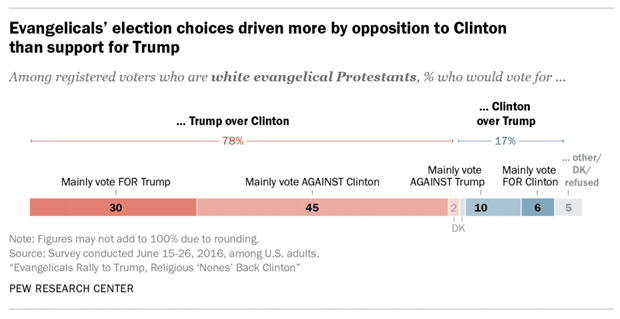 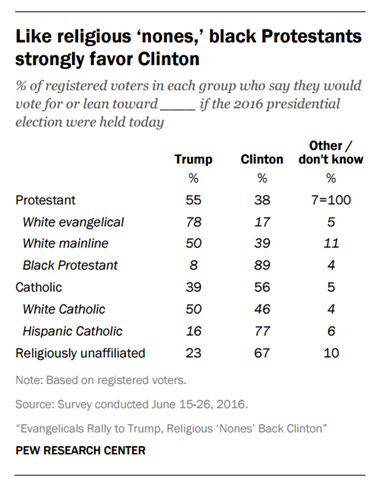 Half of black Protestant voters said their vote was in support of Clinton (53%), while one-third said they were voting against Trump (34%). This preference lines up with African Americans at large, who favor Clinton.

Black Protestant voters diverge from the much larger group of white evangelicals, who make up one out of five registered voters and one out of three Republicans.

“Despite the professed wariness toward Trump among many high-profile evangelical Christian leaders, evangelicals as a whole are, if anything, even more strongly supportive of Trump than they were of Mitt Romney at a similar point in the 2012 campaign,” Pew stated. “At that time, nearly three-quarters of white evangelical Protestant registered voters said they planned to vote for Romney, including one-quarter who ‘strongly’ supported him. Now, fully 78 percent of white evangelical voters say they would vote for Trump if the election were held today, including about a third who ‘strongly’ back his campaign.”

The two-thirds who don’t strongly favor Trump backed other candidates in the primaries, Pew stated. But left with only Trump or Clinton as options, 93 percent of Republican or Republican-leaning white evangelicals said they will vote for Trump.

“While many evangelical voters say they ‘strongly’ support Trump over Clinton, this does not necessarily mean Trump is their ideal choice for president or that they are convinced he shares their religious convictions,” Pew stated. “In the current survey, 42 percent of white evangelicals say it will be difficult to choose between Trump and Clinton because neither one would make a good president. And a January Pew Research Center poll found that 44 percent of white evangelical Republicans view Trump as ‘not too’ or ‘not at all’ religious.” 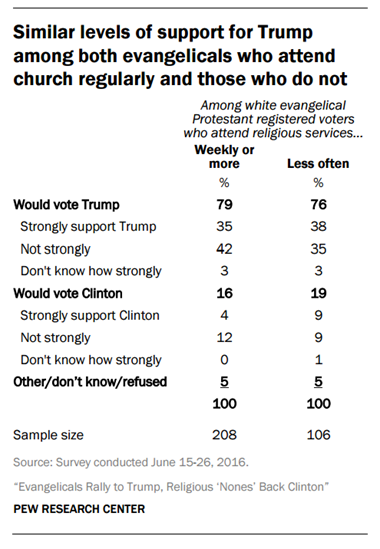 Overall satisfaction with the nominees is at its lowest point since 1992, when Bill Clinton won over George H. W. Bush. Two out of five voters don’t think Trump or Clinton would be a good president; half say they’re voting against a candidate rather than in support of one. In the 2012 election, only a third voted against Barack Obama or Mitt Romney. 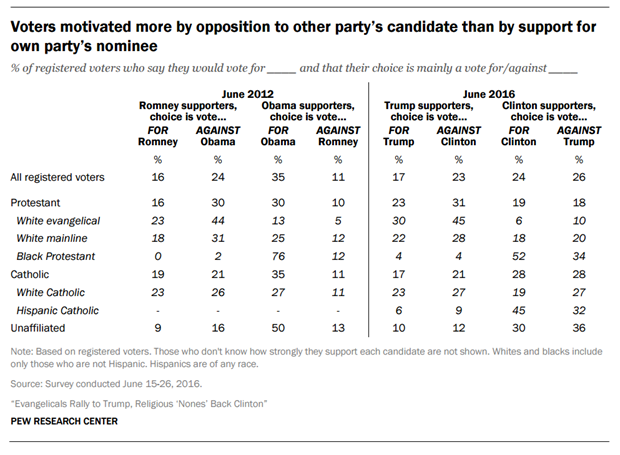 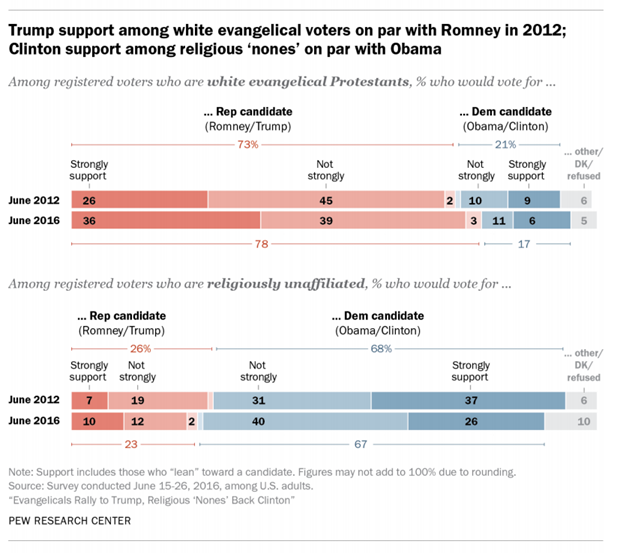 Black Protestant voters in 2012 again stuck with the African American voting bloc. Nearly all black Protestants (95%) in 2012 voted for Obama. 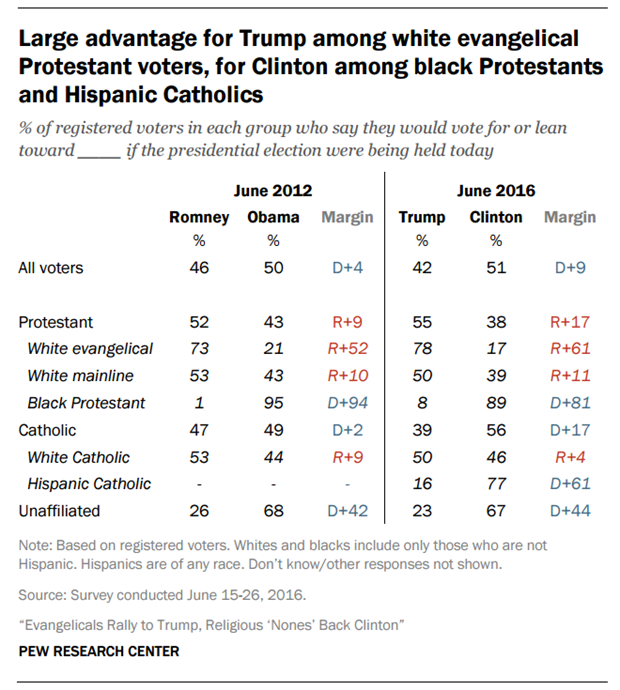 Even though voter satisfaction is down, voter engagement is up. White evangelicals and black Protestants are more likely to say that it “really matters” who wins the election and to follow the news about the candidates closely. More white evangelicals are also thinking “quite a lot” about the election, while the number of black Protestants doing likewise is the same as 2012. 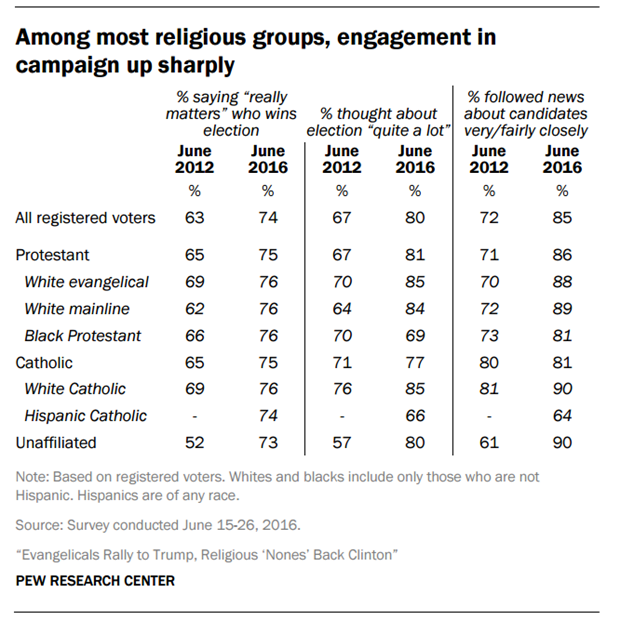 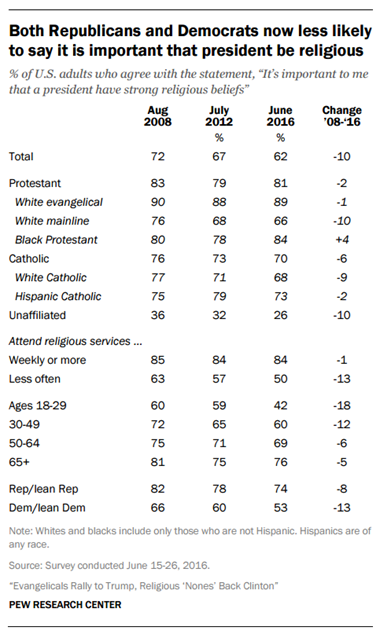 However, white evangelicals (89%) and black Protestants (84%) buck the trend, and are actually more likely to want a candidate that shares their faith than they did four years ago.

Even if they wish there was another choice, white evangelicals do like Trump’s position on the issues, or at least they like his positions more than Clinton’s. White evangelicals (52%) consider abortion a “very important” issue when deciding who to vote for, but more consider issues such as terrorism (89%), the economy (87%), and foreign policy (78%) crucial when choosing a candidate. 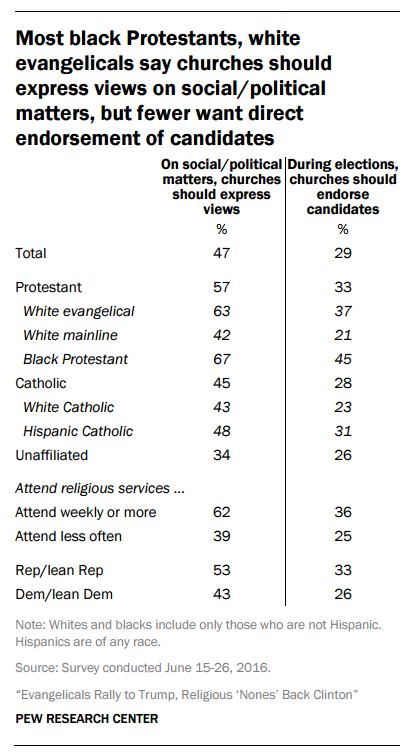 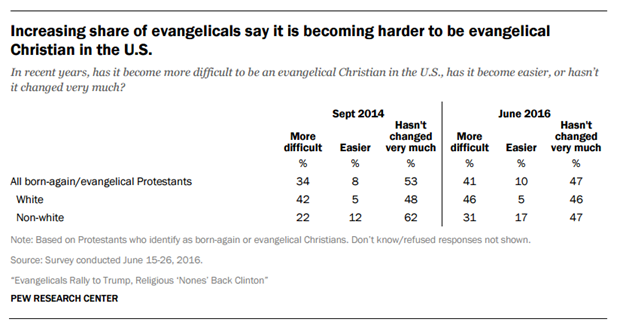 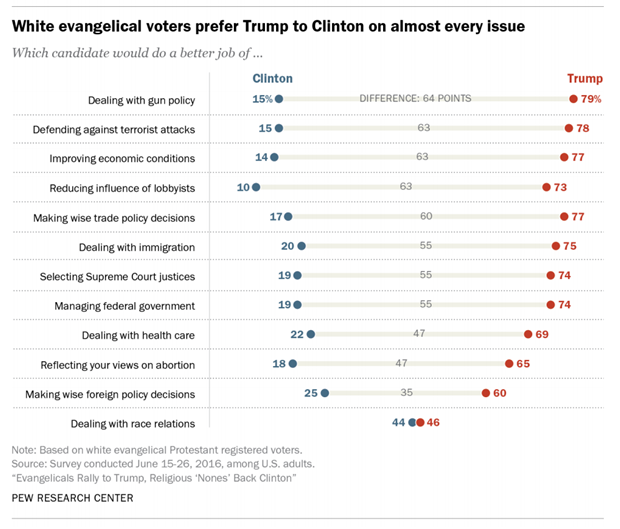