In my early 20's, I couldn't relate to my over-40 friend who was beside herself because she didn't have a husband. I, like so many others, thought she would be better off if she could just be content with singleness.

But 20 years later, I know differently. Singleness hurts. And I learned how to minister to those who bear its pain.

I married for the first time at the age of 40. Getting married later in life was a spiritual battle of epic proportions. As an older single, I warred against doubt, discouragement, rejection, and depression. I navigated the minefield of today's male-female relationships. Bitterness, resentment, and even antipathy toward the opposite sex had foiled my attempts to find true love.

In the midst of this invisible war, several well-meaning Christians offered some unhelpful advice. "You just need to be content," they said.

"Just be content" encouraged me as an optimistic 20-year-old. But it became hurtful when I began fearing my 30s, ... 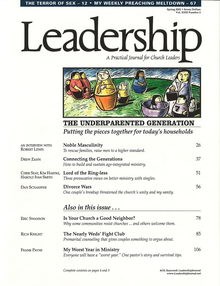 This article is from the Spring  2002 print issue of Leadership Journal. Subscribe to continue reading.