How to minister to people caught in fornication 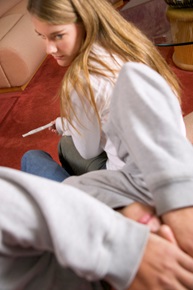 If fornication is sin, why do Christians engage in it? Why is sexually immorality prevalent among the Body of Christ? And what's the appropriate response?

Everywhere we look we see the word SEX. Sexual immorality is not only blatant; it is subtle too. Magazine articles, books, movies, and videogames are enticing us. Even provocative dressing in church can distract even the most consecrated minds.

With each generation we seem to have new ways to commit old sins. Now fornication is even portrayed in cartoons. This generation grapples with animated characters using perverse language and engaging in sexual immorality. Media is bold; I must screen what I watch. Fornication is an expected problem among unsaved youth. It's horrifying when it becomes an epidemic in the church.

Leading in youth ministry for several years, I discovered the greatest battle among the youth was fornication. Their questions and personal stories were unbelievable. Clearly, we had failed them. They hardly concerned themselves with soul-winning and maturing in their Christian faith. They engulfed themselves in how much sin they could get away with. Christian youth are not the only ones struggling. Christian single adults face maintaining sexual purity while risking not being chosen because they uphold biblical principles.

Scare Tactics and Manipulation Are Ineffective

Often in the body of Christ, we skate around issues relating to sexually immorality. We have typically taken one approach, judgmental in nature: we bash and crush those who have fallen into sexually immorality. This carelessness has caused the current generation to turn a deaf ear to truth and righteousness.

The Bible is replete with wisdom and counsel. The problem is many aged Christians and even leaders lack the biblical knowledge to effectively teach spiritual truths concerning fornication and other forms of sexual immorality. In churches that lack the biblical fortitude, scare tactics about hell are used to enforce purity and abstinence. This approach was useless in the past and is completely irrelevant now. This young generation's everyday life is "hell": They must deal with declining moral values, increases in broken homes, rampant acceptance of homosexuality, declining spiritually sound churches, and rising carnal Christians. Worse, they must face a busted economy that leaves them with joblessness, hopelessness, and a future that looks bleak.

Our failure to teach biblical truths concerning fornication further perpetuates the tactics of the enemy. Growing up in a very strict religious environment, all I heard was "Fornication is a sin. If you do it, you are going to hell." Although this message came across the pulpit, many of us were still in bondage to the sin of fornication. I heard little about how to "flee" fornication, how to "abstain" from the very appearance of evil, or how to "maintain" my temple. I was a candidate for the bondage of fornication. The Bible decrees in Hosea 4:6a, "My people are destroyed from lack of knowledge" (NIV).

Teach with Conviction, Restore in Love

In 1 Corinthians 10:6-13, Paul admonished believers to take notice of how the Israelites fell in the wilderness. He warned us to see them as examples. His message was relevant, and he posed a timeless truth: Refrain from prideful correction and consider yourself. Paul explicitly stated in verse 12, "If you think you are standing strong, be careful not to fall."

The church has taken a back seat on certain issues so church growth will not be hindered. But who wants a church full of weak, carnal Christians? I would rather have a small group of saved, holy Christians who demonstrate Christ in their daily lives.

We must teach unmarried Christians and youth that our bodies are holy to the Lord, and when fornication is committed, a double-edge sword is cutting away. Fornication is a sin against God and one's own body. We must teach them they should flee fornication. (I often say when the Bible says "flee," it means to run at top speed.) We must also show them the grace of God when they make mistakes.

There are certain positions the church should not take. For example, I have seen young girls and women who were overtaken by fornication, brought before the church and made to repent because they were a "reproach" to the church. The errors in this practice were that the fathers were always absent and the "invisible sins" always went unnoticed and unpunished. Eventually, the offending parties walked away from God, never realizing Christ's plan for redemption, and their purposes were castrated.

God never condemns the way we do. Often, when fornication is extremely prevalent in a church or Christian organization, sexually immorality can be found in the life of the leaders themselves. When an individual is overtaken in a fault, we who are godly are to restore them in a spirit of meekness, considering ourselves lest we are also tempted (Galatians 6:1).

Sex has been considered taboo in the church. Not sure why, since sex was God's idea. Sex taught in proper context helps kill curiosity and decreases the possibilities of sexual immorality. In Genesis 4:1, the Bible says, "Adam had sexual relations with his wife, Eve, and she became pregnant." There were no magazines, websites, books, or television. How did they know what to do? All God's idea. God created us to desire sex and enjoy it in the confinement of marriage. As educators, we correct bad teaching and inappropriate behavior through remediation and re-teaching. When we apply correct teaching, it will yield appropriate behavior. Inappropriate behavior is modified through love.

One of the greatest weapons against fornication is education. We must educate the body of Christ on God's ideas about sex. Hebrews 13:4 clearly states, "Give honor to marriage, and remain faithful to one another in marriage. God will surely judge people who are immoral and those who commit adultery." Self- explanatory! If this Bible principle were taught more frequently, we would have less fornication and other forms of sexually immorality. Sex was never prohibited by God, it is not dirty, nor is it a sin to enjoy it. Sex was created by God not just for procreation but also for our enjoyment and to connect intimately with our spouse.

Transparency is necessary for effective teaching and relevancy. For too long, we have concealed our struggles with sexual sin. When we are willing to disclose our failures concerning sexual immorality and God has restored and delivered us from the enslavement of sexual immorality, we demonstrate the power of God. When I shared my struggle with fornication, as a believer, it gave incredible credence to the power of God's love, mercy, grace, and forgiveness. When we expose our own failures with fornication, and how the redemptive power of God rescued us, we help cripple and destroy the yoke of sexual bondage on the lives of others.

The body of Christ has a responsibility to counterattack the schemes of the enemy. Maintaining sexual purity can be done. We must govern the gates at which we receive information: eyes, ears, mouth, touch, and heart. In Ezekiel 44:23, through the prophet God commanded that the priests "teach my people the difference between what is holy and what is common, what is ceremonially clean and unclean." The priests had the responsibility to care for the house of God and minister to his people. Those who minister to God's people have this great responsibility, but we all must be willing to live this in our daily lives.

I love to plan celebrations of any kind. Why not take the art of celebrating to the next level? It is victorious when anyone maintains sexual purity. As a young person, I was embarrassed because I was a virgin and I lied about it. I succumbed to the pressure of premarital sex so I could fit in. The world flaunts sexual immorality; the church should raise the standard of sexual purity.

We celebrate purity through accountability groups, social media blasts, award ceremonies, and conferences. The accountability groups are the first line of defense in overcoming the temptation to sin. Social media blasts are used to promote all kinds of lewd things. Why not use them for the opposite reason, and promote sexual purity? We can celebrate the beauty of maintaining sexual purity through conferences where we teach the truth about sex, dating, and marriage. Finally, the awards ceremonies should celebrate the single men and women who win the battle over sexual immorality.

Fornication is a sin and it was defeated by Jesus. Let us not leave this generation behind through the lack of teaching, erroneous teaching, and the failure to restore when they fall.

Domeniek L. Harris is a freelance writer, speaker, professional educator, women's ministry leader, Bible study teacher, and founder of By His Side Ministries, a multicultural, interdenominational, and international ministry for ministry wives. She is a co-laborer in pastoral ministry, and pastor's wife, at Bibleway World Outreach Ministries in Cordova, Tennessee.

END_OF_DOCUMENT_TOKEN_TO_BE_REPLACED

Does the Bible Really Say I Can’t Teach Men?How Should the Church Handle Adultery? When Church Leaders Mistreat YouThe Strong Power in Every Woman