For many evangelicals, it’s time to name the evil beneath the violence.
Kate Shellnutt|August 5, 2019 12:16 AM 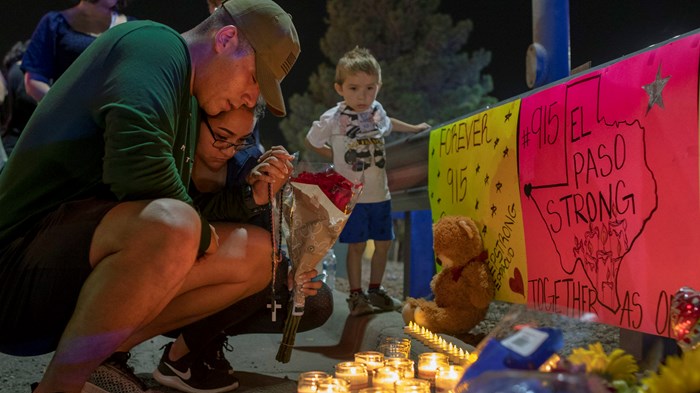 With two mass shootings making national news over the weekend, responses from evangelical leaders shifted from mourning the tragic events to naming the evil blamed for recent attacks.

Several pastors spoke up to decry the racism and white supremacy that, according to an online manifesto, motivated a gunman to attack a Walmart in the border city of El Paso, Texas, killing 20 people and injuring 26 more on Saturday. That night, another mass shooting took place at a bar in Dayton, Ohio, though authorities have not determined a motive.

“As president of @SWBTS, I want to be clear that we condemn in the strongest possible form any and all ideologies of racial/ethnic superiority/inferiority that fuel the kind of hate evidently motivating the #ElPaso shooter to commit such a horrific act of violence in our state,” tweeted Adam Greenway, president of Southwestern Baptist Theological Seminary in Fort Worth.

… the patterns on display over the last few years have revealed that we are contending here not with another “lone wolf,” but with the fruit of a murderous and resurgent ideology—white supremacy—that deserves to be treated by the authorities in the same manner as has been the threat posed by militant Islam.

The El Paso tragedy marks the second US attack this year involving a young white man who named the New Zealand mosque gunman as inspiration (as did the California synagogue shooting suspect back in April). According to reports, the 21-year-old accused of opening fire at Walmart wrote, “This attack is a response to the Hispanic invasion of Texas.”

Since 2017, white extremists have targeted victims in eight US attacks, but the El Paso shooting was the most deadly, The New York Times reported. The ideology has been linked to at least four of the ten worst “active shooter incidents” in the country.

While Christian leaders repeatedly join in the sadly-too-familiar refrain of mourning mass shootings in America, the rhetoric has clearly intensified.

On Sunday, preachers Greg Laurie and Jack Graham attributed the surge in shootings to an escalating spiritual battle and the work of the devil, while others specified that such evil is rooted in racism.

The recent incidents have prompted more US evangelicals to declare “Christ’s supremacy over white supremacy”—as John Starke, lead pastor of Apostles Church Uptown in New York, put it—and to call on fellow believers to do the same.

“When these manifestos outline the motive as #WhiteSupremacy, the Church CAN’T be silent in calling this out! #WhiteSupremacistTerrorism,” wrote D. A. Horton, pastor of Reach Fellowship in Long Beach, California, and a professor at California Baptist University. “This doesn’t mean everyone of European descent is a White Supremacist. But it does identify the system of hatred that is rooted in evil.”

Christian leaders of color, like Wheaton College professor Esau McCaulley and hip-hop artist Propaganda, were quick to bring up how churches might address the shootings on Sunday morning.

“We had a Latina sister from the El Paso area in worship today. She told me Latinx brother and sisters near the southern border are absolutely terrified they could be next,” said Mika Edmondson, who leads New City Fellowship in Grand Rapids, Michigan. “We prayed, ‘Lord deliver us from this present evil age … from white nationalism & the principality of racism.’”

White pastors from a range of traditions offered similar sentiments over the weekend, linking the evil of mass shootings to racism.

“Mass murder is not a ‘tragedy.’ A cyclone or an earthquake or a tornado that takes lives is a tragedy,” tweeted Ray Ortlund, pastor of Immanuel Nashville. “But mass murder is evil. And if motivated by racism, it is evil compounded.”

Some Christians coupled their condemnation of white supremacy with “violent Leftism,” citing the reported political leanings of the Dayton shooting suspect. “It’s all awful. White supremacy is disgusting. And so is violent Leftism,” wrote pro-life activist Lila Rose. “… until we stop pretending that the violent, nihilistic outbursts in our country are due to ONE sick ideology or ONE cause, we won’t be able to prevent them.”

Southern Baptists made their opposition to the alt-right resurgence of white supremacy and white nationalism official in a resolution in 2017. That same year, many evangelical leaders, including advisers to President Donald Trump, spoke up to decry the Unite the Right rally that drew protestors to Charlottesville, with some going on to criticize Trump’s controversial “both sides” response.

“Neither the nation nor the church has demonstrated a sustained commitment to confronting white supremacy,” wrote Theon Hill, Wheaton communication professor, following the Charlottesville clashes.

“At key moments, Christians have advocated for the abolition of slavery, death of Jim Crow, and the end of mass incarceration, but the commitment to equality has consistently languished over time. Our lack of sustained commitment to biblical justice keeps the soil of racism and white supremacy fertile for the James Fields Jr.s and Dylann Roofs of American culture to grow into domestic terrorists.”

After the mosque massacre in Christchurch, New Zealand, CT heard from evangelicals around the world about how Christians could respond. After the Poway synagogue shooting, a fellow Orthodox Presbyterian reflected on the suspect’s ties to his tradition.

CT has also reported on pastors who have advocated for tighter gun restrictions and ministries offering outreach in the wake of mass shootings.