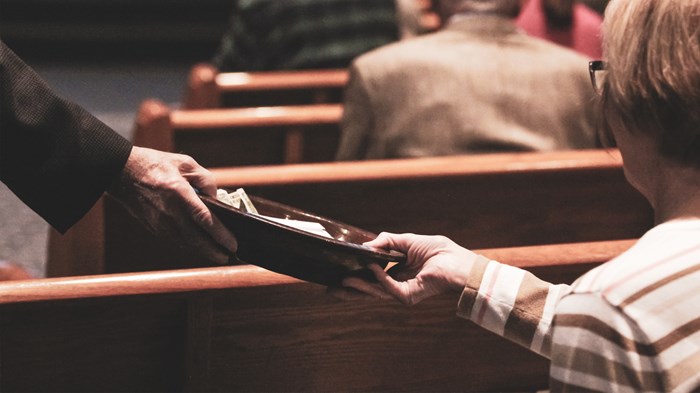 It will take months to tally the millions Americans donate to charity on Giving Tuesday. But analysts already know what kinds of charities are favored by American evangelicals—and that the GOP tax reform bill that went into affect last year has had an impact on giving.

Overall, cash giving to evangelical ministries held steady between 2017 and 2018 (the latest year for which data is available), declining 0.6 percent after six consecutive years of increases, according to a new report by the Evangelical Council for Financial Accountability (ECFA).

The virtually unchanged giving levels among evangelical ministries emerged despite a 6.2 percent decline in the stock market’s S&P 500 index, which tends to mirror trends in charitable giving, and despite a 3.9 percent decline in overall giving to religion between 2017 and 2018, according to an analysis by Giving USA.

“I am pleased to see this ongoing support for Christ-centered churches and ministries,” said Dan Busby, ECFA president and CEO. “This generosity positions ECFA members to continue their positive impact for their causes both domestically and internationally.”

The State of Giving 2019 analysis from ECFA considered the finances of more than 1,900 of its accredited members and included $13.9 billion in cash giving. All year-to-year comparisons in the report were adjusted for inflation.

Despite some recent scrutiny over its role as a financial watchdog, EFCA itself has been growing, from 1,409 member ministries in 2009 to more than 2,400 today. (The year-to-year analysis relied mostly on audited financial statements and considered only ministries that were members during both years under evaluation.)

In a webinar accompanying the ECFA’s report, Busby said five-year giving trends generally are more significant than year-to-year comparisons because two-year analyses can be skewed by shifts at larger ministries, among other factors. The bottom four ministry categories in the 2017­–2018 analysis all saw growth or held steady in their giving totals over the previous five years.

Despite the decline in overall denominational giving for 2017–2018 in the ECFA study, giving to the two largest US Protestant denominations—the Southern Baptist Convention (SBC) and the United Methodist Church (UMC)—basically was steady over the same period, according to financial statements from each denomination. The $197 million received through the SBC’s Cooperative Program allocation budget for its fiscal year ending September 30, 2018, was down 0.05 percent from the previous year. Contributions to the UMC’s general funds totaled $143.7 million in 2018, a 0.2 percent increase from 2017.

The 2018 decline in giving to relief and development organizations may have been attributable to the varying number of natural disasters in the two years considered, Busby said. According to annual reports from the Brussels-based Centre for Research of the Epidemiology of Disasters, there were 335 natural disasters worldwide in 2017, affecting nearly 96 million people (including record-setting hurricanes Harvey and Maria and deadly mudslides in Sierra Leone). The number was down in 2018 to 315 natural disasters, affecting 68 million people.

Fifteen of the 26 ministry categories tracked by ECFA saw giving increases between 2017 and 2018. The largest increases occurred among community development ministries (up 26.1%); camps and conferences (up 23.1%); medical, dental, and health services (up 11.9%); and student/youth ministries (up 9.3%). For each of those ministry categories, giving also was up at least 7.2 percent for the previous five years, though increases were more measured than in the past year.

The ECFA analysis of 2018 giving also provided one of the first looks at the impact on charitable giving of the Republican tax reform plan, which was signed into law by President Trump in late 2017 and took effect January 1, 2018.

Tax reform “has definitely influenced giving,” Busby said. But he added that one year of data is not sufficient to establish trends.

The GOP reform package raised the standard deduction in 2018 to $12,000 for singles (up from $6,350) and $24,000 for married joint-filers (up from $12,000), causing fewer givers to itemize their charitable deductions. Some evangelical leaders had worried 30 million Americans could lose part of their incentive to donate.

Busby and lead ECFA researcher Warren Bird noted that just 9 percent of Americans claimed charitable deductions on their tax returns for 2018, down from 27 percent in 2017 before the Republican reforms took effect.

However, the apparent negative effect of tax reform on giving overall seems to have been mitigated among evangelicals, as some predicted would occur thanks to Christians’ commitment to give apart from tax incentives.

“Givers to Christ-centered ministries have adapted to changing attitudes and approaches to giving and allowed ECFA members to see relatively steady giving overall one year into tax reform,” Busby said.

A LifeWay Research survey released today seemed to corroborate Busby’s analysis, with 64 percent of pastors stating they don’t think the 2018 tax reform had any impact on their church’s finances. Among pastors, 14 percent cited a negative impact and 12 percent said it had a positive impact.

Last year, 42 percent of Protestant pastors said their offerings exceeded the previous year. This year, just 37 percent of pastors said their giving is exceeding 2018 levels. LifeWay Research executive director Scott McConnell suggested that lower tax withholding levels in 2018 may have contributed to the drop. He said that “there are no signs 2018 tax reform created continued income growth for churches” in 2019.

Overall, 41 percent of pastors say the economy is having no impact on their church this year, according to LifeWay. Thirty percent note a positive impact and 26 percent a negative impact.

Here is the complete ECFA analysis of changes in giving to evangelical ministries (the percentage increase in cash giving for each ministry type):

Earlier this year, CT reported on the rise of digital giving through mobile apps like Tithe.ly and Pushpay, the preferred method of giving for 15 percent of churchgoers and most major US megachurches. Previous research has also shown a generational gap in approaches to charitable giving, with millennials more likely than older generations to see it as a “spur-of-the-moment” decision rather than a planned discipline.