The International Days of Prayer for the Persecuted Church draw attention to China and other countries where Christian minorities have suffered blows over the past year.
Megan Fowler|November 1, 2019 09:43 AM 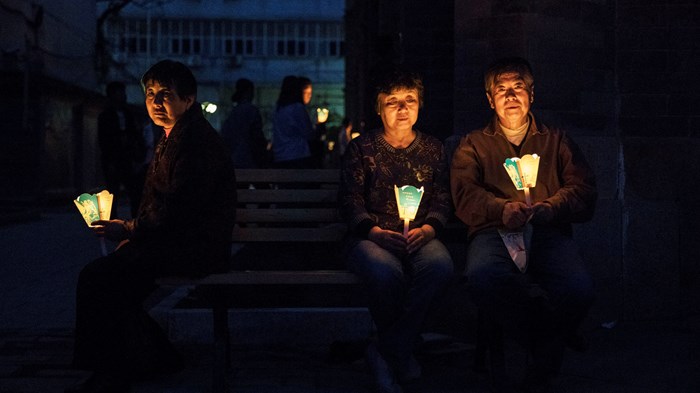 As Christians prepare for the International Days of Prayer for the Persecuted Church on November 3 and 10, advocates have increasingly turned their attention to China.

Christian persecution is not new in China, but it is growing. According to Open Doors—which ranked the country 27th on its 2019 World Watch List, a 16-spot jump from 2018—Chinese authorities are removing young people from church, monitoring worship via CCTV, and prohibiting teachers and medical workers from maintaining any religious affiliation.

David Curry, CEO of Open Doors, told CT that many Americans see China as a global superpower, but don’t recognize the extent of the restrictions by the Communist government . “Right now, in 2019, Christians are walking into churches where there are signs posted at the door that say ‘No Children Allowed,’ and where they are being video taped as they worship,” he said.”

Todd Nettleton, host of Voice of the Martyrs’ VOM Radio, says that while unregistered house churches have endured persecution for years, the church in the October video was a registered church, marking a new wave of religious oppression.

Over 245 million Christians live in the 50 countries ranked on the World Watch List as worst for Christians. Between November 2017 and October 2018, 4,136 Christians were killed for their faith in these countries, over 1,266 churches or Christian buildings were attacked, and 2,625 believers were detained, arrested, sentenced, or imprisoned — many of them without a trial.

Voice of the Martyrs, Open Doors, International Christian Concern, and other organizations have provided information, prayers, and an app to help believers pray for and connect with the persecuted church for the days of prayer held each year in November. New in 2019, Open Doors has recorded videos of 20 evangelical leaders praying for Christians around the world (a couple appear in the list below).

Nettleton said Christians can head the exhortation of Hebrews 13:3 and “remember those in prison as if you were together with them in prison.” For those suffering due to their faith, “this is a significant encouragement to the persecuted parts of our family because they know they are being prayed for.”

Besides China, here are 10 more places where religious persecution made headlines in 2019:

Over the past two years, the Algerian government has closed 14 of the country’s 50 churches, including the 700-member Church of the Full Gospel in Tizi-Ouzou, the largest Protestant church in the North African country. Algeria ranks 22nd on the World Watch List. Though Algeria’s blasphemy laws make it difficult for Christians to share their faith, most of the new believers in the country come from a Muslim background, according to Open Doors.

While Christians in Egypt have had more security under Egyptian president Abdel Fattah al-Sisi, including the approval of 168 new churches at the end of 2018, they still experience persecution in the majority Muslim country. Islam is the religion of the state—Christians make up 8%–10% percent of Egypt’s nearly 100 million people—and its Shari'ah law is the main source of legislation. According to the State Department’s 2018 Report on International Religious Freedom, persecution has increased in Egypt. This year, Morning Star News chronicled several troubling events so far this year, including mobs converging on churches to harass Christians, threats, and arrests.

In Eritrea, the small East African nation that borders the Red Sea, more than 150 Christians were arrested this year. Christian detainees often are held in harsh conditions, without ever being formally charged with crimes. “People just get arrested, disappear into the prison system, and sometimes released, sometimes stay in for years,” Nettleton said. In August pro-government bishops expelled Abune Antonios, patriarch of the Eritrean Orthodox Church. Eritrean gospel singer and torture survivor Helen Berhane met with President Trump in July to highlight the plight of Christians in the country.

Open Doors has a special prayer focus on India for the 2019 International Day of Prayer. International Christian Concern reports that on October 5 three American pastors were detained by Indian customs agents after they told officials that they were Christians. The government continues to restrict the involvement of Christian NGOs and charities, strengthening anti-conversion laws, and local believers have continued to endure attacks from Hindu extremists. The US Commission on International Religious Freedom reports that mobs go after non-Hindus based on false accusations of conversion or cow slaughtering, and local governments often fail to prosecute the attackers.

The 800,000 Iranian Christians face intense persecution in a country where converting from Islam is illegal. Last month, Open Doors reported that nine Iranian Christians were sentenced to five years in prison each for “acting against national security”—a charge the state often uses to prosecute Christians for their house church activities. According to a report by Middle East Concern, Open Doors, Article18, and Christian Solidarity Worldwide, 29 Christians were detained in 2018, but many more detentions remain undocumented. The country has also reportedly shut down houses of worship and targeted churches that worship in Persian and could attract Muslim-born Iranians.

Despite the political defeat of ISIS in Iraq, Christians still suffer persecution and the lingering effects of their culture and population being systematically destroyed by the Islamic extremists. According to Open Doors, the Assyrian Church of the East, the Syrian Orthodox Church, the Syrian Catholic Church, the Chaldean Catholic Church, and the Armenian Orthodox Church remain seriously affected by persecution in Iraq, especially from Islamic extremist and government authorities. In central and southern Iraq, Christians often do not publicly display Christian symbols, such as a cross, as this can lead to harassment or discrimination.

For more than a decade North Korea has topped the World Watch List of most dangerous countries for Christians. In a country where citizens are taught to worship the ruling family, Christian teaching feels particularly threatening. “[North Koreans] are taught that the Kims are divine beings, so they cannot let Christianity come and spread freely in their country because it undermines the Kim family and the government,” Nettleton said. Experts estimate that 300,000 Christians live in the country with “the most ruthless human rights record of the 21st century.”

Despite its claims of religious liberty reform, and recent meetings between U.S. evangelical leaders and Crown Prince Mohammed bin Salman, Saudi Arabia remains one of the most difficult countries in the world for Christians, ranking 15th on Open Doors’ World Watch List. The country bans the public practice of non-Muslim religions, and there are no churches for the country’s 1.4 million Christians. Charges of apostasy are still punishable by death, and Christian symbols or meetings of any kind are illegal. In November 2018, the Secretary of State Mike Pompeo re-designated Saudi Arabia as a Country of Particular Concern for its violations of religious freedom.

Coordinated attacks by Muslim extremists on three churches and three hotels on Easter Sunday this year killed 253 people and left 176 children without one or both parents. It is believed to be the deadliest church attack in Asia in modern history. Religious freedom advocates see the Sri Lankan attacks as a chilling example of the dangers of religious nationalism. Nearly 11 percent of Sri Lanka’s population is Christian in the majority-Buddhist country, and believers on the South Asian island experience serious persecution that continues to escalate.

President Recep Tayyip Erdogan sends mixed messages on religious liberty. According to World Watch Monitor, “In Turkey, Christianity is seen as a Western religion and evangelicals in particular are considered by many to have links with the USA.” The president attended the groundbreaking ceremony of a new Syriac church in Istanbul, the first new church in Turkey since 1923. At the same time, the government has systematically revoked visas for Christians. The two-year imprisonment of American pastor Andrew Brunson has triggered increased incidents of hate speech against Turkish Protestant communities. And Syrian Christians on the Turkey-Syria border claim the Turkish government aims for their extermination.