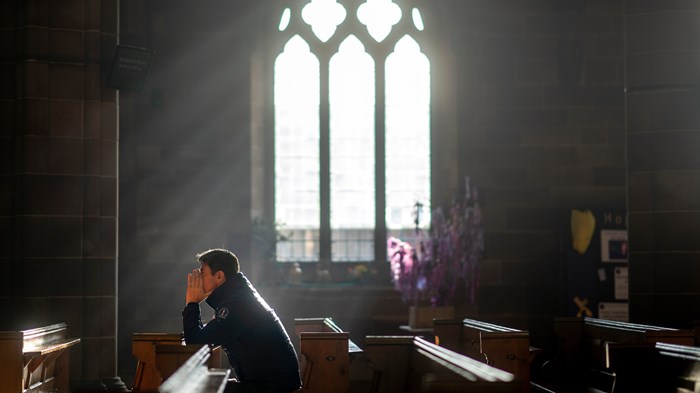 The Bible repeatedly teaches the value of regular prayer. “Pray continually,” Paul tells the church in Thessalonica. Pray “in every situation,” he advises the church in Philippi. And to the church in Colossi he says, “Devote yourselves to prayer.”

According to a new Savanta ComRes survey sponsored by Premier Christian News, 12 percent of British adults say they pray at least once a day. In contrast, a Pew Research Center survey last year found that 49 percent of Americans say they pray every day.

“It’s not particularly surprising to see less and less people are choosing to pray regularly,” said Marcus Jones, head of Premier Christian News. “What is interesting is despite many having big concerns about the future of our country and our world, people aren’t choosing to respond in prayer.”

Global phenomena like secularization, immigration, and technological development are overhauling the church in the UK. CT reported in 2016 that for every Anglican church in London that closed its doors since 2010, more than three Pentecostal churches launched. Likewise, while many British churches are struggling to retain members, churches with strong bases of African and Asian immigrant believers are going strong. This is a key part of why there are now more churches than pubs in the UK.

Premier’s survey found that people of color—or BAME (Black, Asian, and Minority Ethnic) in UK terminology—comprise a larger share of British Christians who regularly attend church (15%) than of Brits who identify as Christian (6%).

As the demography of faith changes, prayer trends are changing too.

For instance, whereas in the United States, urban centers are often thought to be the heart of rising secularism, prayer is more prominent in Great Britain’s cities. And Londoners are significantly more likely to pray regularly than British adults generally (38% vs. 23%).

More than 1 in 5 London residents (21%) pray at least once every day. On average, only 1 in 10 Brits prays that often. In Scotland, only 14 percent of adults say they pray with any regularity.

The uptick of prayer in London may point to growing Pentecostal and immigrant-operated churches there, but is also reflective of the fact that a large share of British Muslims live in the capital.

Meanwhile, 1 in 3 Brits who identify as Christians say they never pray.

While Muslim Brits pray more readily than their Christian countrymen, what causes them to pray varies. For instance, while 80 percent of British Muslims say they pray at least once a day, national and international events were not usually the catalyst.

Premier Christian News, a new website from Premier Christian Communications (which operates a group of Christian media channels), features faith-related news stories made unique because each concludes with a short prayer of response. The prayers operate as prompts—and a tracking mechanism—for prayer in a nation where Christians are less frequently falling on their knees to speak with God.

For instance, at the end of an article reporting that Episcopal Bishop Michael Curry reached out to offer “pastoral care” to Prince Harry and Meghan Markle, the Duke and Duchess of Sussex who recently announced a separation—or #Megxit—from the royal family, is a prayer that thanks God for the royal family and says, “We pray for Harry and Meghan as they make this change. We pray for guidance and wisdom for them both as they take up new things and lay some things down. Amen.”

After a story about the recent execution of Nigerian pastor Lawan Andimi is a prayer that reads, “Please protect your people in states where they are being brutally murdered,” and also prays for Andimi’s family and church, and for his murderers to become believers.

“We believe prayer changes things,” said Jones. “We are delighted to be able to equip Christians to pray into the issues affecting our country and our world.”

Jones said since the new website launched, thousands had committed to offer prayers for Brexit, the royal family, and the Australian wildfires.

“We believe these prayers will bring about positive change in our world,” said Jones.

Among major world events from the last year, the fires in Australia were prayed for by the most British adults (21%). Slightly fewer (18%) were spurred to prayer after the London Bridge attack. Only 1 in 10 prayed about conflict between the United States and Iran, or about the Sri Lanka Easter bombings, or about Brexit.

While major tragedies and crises often warrant social media #PrayFor campaigns like #PrayForParis and #PrayForBrazil—a nationwide ComRes prayer poll sponsored by Tearfund in 2017 found that among Brits who pray, more than half (55%) are most likely to do so during a crisis—only 1 in 7 Brits told Premier’s pollsters they have ever prayed as a result of such a hashtag.