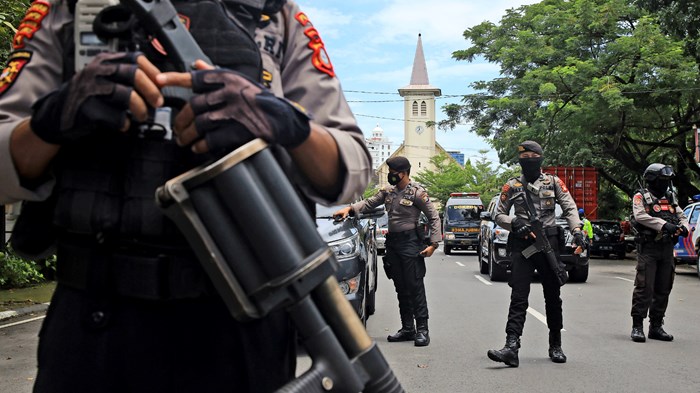 Image: Yusuf Wahil / AP
Indonesian police officers in Makassar stand guard near a Catholic church where an explosion went off on Palm Sunday in South Sulawesi on March 28, 2021.

MAKASSAR, Indonesia (AP) — Two attackers believed to be members of a militant network that pledged allegiance to the Islamic State group blew themselves up outside a packed Roman Catholic cathedral during a Palm Sunday Mass on Indonesia’s Sulawesi island, wounding at least 20 people, police said.

A video obtained by The Associated Press showed body parts scattered near a burning motorbike at the gates of the Sacred Heart of Jesus Cathedral in Makassar, the capital of South Sulawesi province.

Wilhelmus Tulak, a priest at the church, said he had just finished celebrating Palm Sunday Mass when a loud bang shocked his congregation. He said the blast went off at about 10:30 a.m. as a first batch of churchgoers was walking out of the church and another group was coming in.

He said security guards at the church were suspicious of two men on a motorcycle who wanted to enter the building and when they went to confront them, one of the men detonated his explosives.

Police later said both attackers were killed instantly and evidence collected at the scene indicated one of the two was a woman. The wounded included four guards and several churchgoers, police said.

National Police Chief Gen. Listyo Sigit Prabowo told reporters when he visited the crime scene late Sunday that the two attackers are believed to have been members of the militant group Jemaah Anshorut Daulah, which has pledged allegiance to the Islamic State group and was responsible for deadly suicide bombings on Indonesian churches in 2018.

He said one of the attackers was believed to have links to a church bombing in the Philippines.

The attack a week before Easter in the world’s most populous Muslim-majority nation came as the country was on high alert following December’s arrest of the leader of a Southeast Asian militant group, Jemaah Islamiyah, which has been designated a terror group by many nations.

The Fellowship of Indonesian Evangelical Churches and Institutions (FIECI) condemned the attack, requesting prayer for victims and more respect for religious freedom. The group also called on Indonesian Christians to remain calm, “handing over the investigation to government officials while reflecting on the love, sacrifice, and redemptive work of Jesus Christ” during Holy Week. 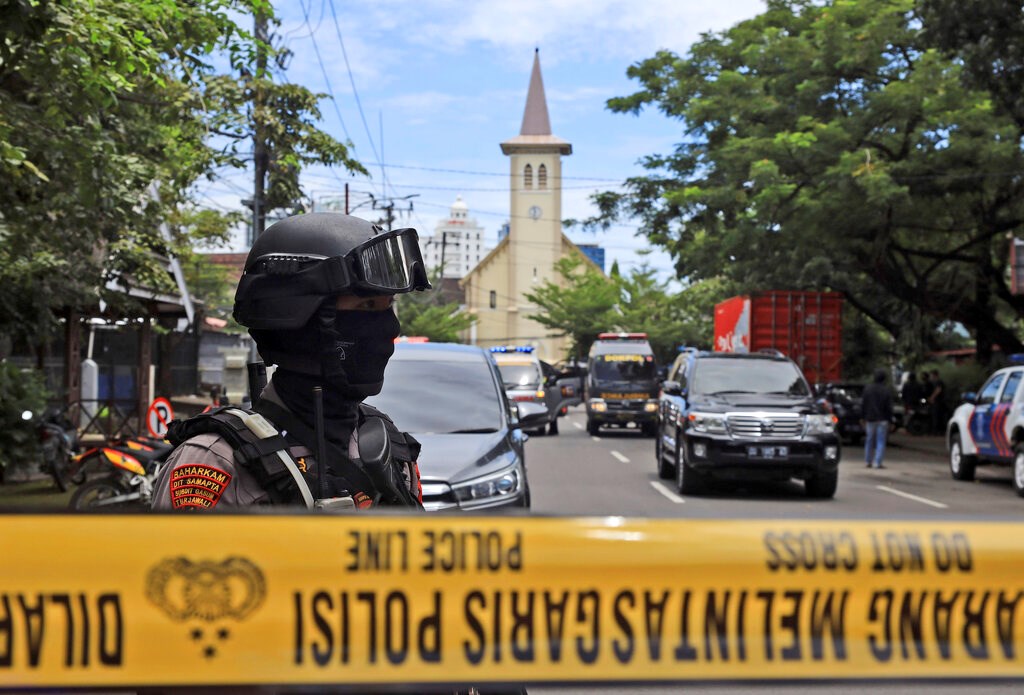 An Indonesian police officer stands guard near the Sacred Heart of Jesus Cathedral in Makassar, South Sulawesi, where an explosion went off on Palm Sunday.

Indonesia has been battling militants since bombings on the resort island of Bali in 2002 killed 202 people, mostly foreign tourists. Attacks aimed at foreigners have been largely replaced in recent years by smaller, less deadly strikes targeting the government, police and anti-terrorism forces, and people militants consider as infidels.

Police have identified one of Sunday's attackers only by his initial, L, who they believe was connected to a 2019 suicide attack that killed 23 people at Our Lady of Mount Carmel Cathedral in the Philippine province of Sulu, Prabowo said.

He said the two attackers were linked to a group of suspected militants arrested in Makassar on January 6, when a police counterterrorism squad shot and killed two suspected militants and arrested 19 others. Members of the squad were initially supposed to arrest the two slain men for their alleged role in the Philippine suicide bombing.

He said on Sunday police arrested four suspected militants believed to have links with the attackers in a raid in Bima, a city on Sumbawa island in East Nusa Tenggara province.

“We are still searching other members of the group and I have ordered the Densus 88 to pursue their movement,” Prabowo said, referring to Indonesia’s elite police counterterrorism squad.

President Joko Widodo condemned Sunday’s attack and said it has nothing to do with any religion as all religions would not tolerate any kind of terrorism.

“I call on people to remain calm while worshiping because the state guarantees you can worship without fear,” Widodo said in a televised address.

He offered his prayers to those injured and said the government would cover all costs of medical treatment. He said he had ordered the national police chief to investigate the attack and crack down on any militant network that may be involved.

At the end of Palm Sunday Mass in St. Peter’s Basilica, which opened Holy Week ceremonies at the Vatican, Pope Francis invited prayers for the victims of violence. He cited in particular “those of the attack that took place this morning in Indonesia, in front of the Cathedral of Makassar.’’

At least 20 people were wounded in the attack and had been admitted to hospitals for treatment, said Mohammad Mahfud, the coordinating minister for political, legal, and security affairs.

Indonesia has been on high alert since police in December arrested Jemaah Islamiyah leader Aris Sumarsono, also known as Zulkarnaen. Over the past month, the country's counterterrorism squad has arrested about 64 suspects, including 19 in Makassar, following a tipoff about possible attacks against police and places of worship.

Jemaah Islamiyah was once considered the preeminent terror network in Southeast Asia, but has been weakened over the past decade by a sustained crackdown. In recent years, however, a new threat has emerged in militants who fought with the Islamic State group in Iraq and Syria and returned to Indonesia or those inspired by the group’s attacks abroad.

Indonesia's last major attack was in May 2018, when two families carried out a series of suicide bombings on three churches in the second-largest city of Surabaya, killing a dozen people including two young girls whose parents had involved them in one of the attacks. Police said the father was the leader of Jemaah Anshorut Daulah.

Nahdlatul Ulama (NU) convened about 300 Muslim scholars from 30 countries in 2016 to denounce extremism, promote the protection of Christians and other religious minorities, and uphold Indonesia as a model. Last year, the World Evangelical Alliance (WEA) partnered with the humanitarian Islam group on an initiative to counter religious extremism, explained by WEA senior theological advisor Thomas K. Johnson last year.

“Though the Nahdlatul Ulama has taken a decisive theological step by saying that Muslims must no longer describe non-Muslims as infidels, substituting the term citizens for non-Muslims, some extremists have not gotten the message,” Johnson, who has written a book on the WEA-NU partnership, told CT. “More such work is needed to fully remove the religious grounds for violence.”

In 2017, religious freedom scholar Paul Marshall, a senior fellow at the Leimena Institute in Jakarta, explained for CT:

If the third-largest democracy on the planet succumbs to Islamic radicalism, then the future of the Muslim world and the rest of us looks dire. The major center of Muslim moderation—and the major counter to ISIS and similar ideologies—will be undercut. This will affect us all.

Open Doors ranks Indonesia No. 47 out of the 50 countries where it’s hardest to be a Christian today.

Terrorism at churches during Holy Week is tragically common. Christians in Egypt suffered one of the worst Palm Sunday attacks in 2017, when dozens were killed at two churches. Meanwhile, Christians in Sri Lanka are preparing to commemorate the second anniversary of the Easter Sunday bombings that killed hundreds at three churches (and other locations) in 2019.

Yusuf Wahil reported from Makassar and Niniek Karmini reported from Jakarta for The Associated Press. Additional reporting by Jeremy Weber for CT.

An Indonesian police officer stands guard near the Sacred Heart of Jesus Cathedral in Makassar, South Sulawesi, where an explosion went off on Palm Sunday.
expand