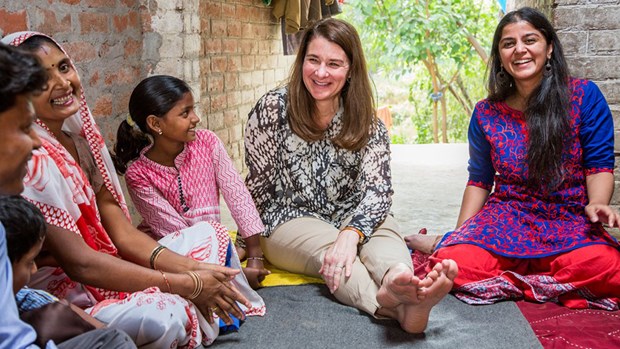 Image: Courtesy of the Gates Foundation

I did something the other day that I immediately regretted. Worse, it was in front of my 2-year-old daughter. I had come down with a nasty head cold that turned into a nasty chest cold, and my daughter, who already shows an incredible amount of empathy, looked at me with concerned eyes as I coughed yet again. I didn’t want her to be worried, so I did what any good parent does: explain that everything was going to be okay.

The exchange was over as quickly as it began, and she started singing the ABCs to herself contentedly. I, on the other hand, felt terrible about my slip-up. I knew this one mistake wouldn’t affect my daughter long-term, but I didn’t like what it revealed about my own gender bias. On a practical level, it’s silly: all of my doctors are women—I know that women make great doctors—but language makes a big difference, and I don’t want to be part of perpetuating the problem.

The issue, perhaps, feels more acute within the church where it’s not as common to see women in leadership roles. Perhaps especially here we need to notice when gender bias is alive and well. As much as I am for women leaders, especially in the church, I find smudges of gender bias all over my thinking. The problem is not so much with having gender bias—certainly, we all suffer to some degree. The problem is with letting that bias go unquestioned. When we do, we can do a lot of damage without even thinking about it.

Earlier this fall, I had the honor of sitting down with Melinda Gates at the Global Leadership Summit held at Willow Creek Community Church. Among other things, we talked specifically about the gender bias she’s experienced as a woman leader. As one of the first women in tech at Microsoft and the co-founder of the Bill and Melinda Gates Foundation, Gates definitely understands the challenges women leaders face.

The reality is that we experience gender bias from an early age, picking up on subtle messages about the kinds of things boys and girls do. Gates told me about a study that was done with young girls who attend computer science camps. The factor that determines whether girls will report enjoying their time at camp may surprise you. Gates explained:

END_OF_DOCUMENT_TOKEN_TO_BE_REPLACED

Women of the Bible
END_OF_DOCUMENT_TOKEN_TO_BE_REPLACED