Choose to Pause and Fill Up

Pausing in a selah with Christ is the catalyst of revival, restoration, and peace.
Read as Single PagePage 1 of 2 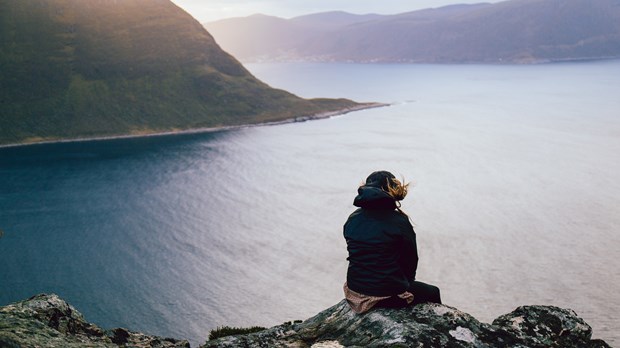 I don’t often choose to rest. Sometimes God has to force me to pause. So when I look at Matthew 17, I relate to Peter. He is always rushing forward, always looking at what is next, passionate, and impulsive. Jesus took him, along with James and John, away from the other disciples. They were leaders among leaders. And so, on a mountain, high, alone, and removed, the Bible tells us that there Christ’s “face shone like the sun and his clothes became as light.” He was joined in that place by Moses and Elijah. And in this transfigured brilliance of his beloved friend and teacher, Peter sees glory with his eyes. But his response is to busy himself—he doesn’t sit to behold Jesus; he works instead to find his place in the moment.

I know that feeling. Peter responds like I imagine I might, quick to offer to build tents for the three men to dwell—to keep working, to fill the air with offerings of help. But then, the voice of the Father speaks. God interjects and starts to talk even as Peter is still ambling for his own worth with his own words. The Father causes a hush to come over Peter’s heart, even as he trembled: “’This is my beloved Son, with whom I am well pleased; listen to him.’ When the disciples heard this, they fell on their faces and were terrified.” It is only the presence of Heaven that stills Peter enough to truly see.

Jesus entrusts just these few to see him illuminated, to hear the voice of the Father proclaim his identity. After they have, Jesus goes to his friends and touches them. He initiates. He tells them to rise and to have no fear. It’s the personal Jesus, the intimate Jesus, who beckons their eyes to look up. When they do, they see only him standing with them, alone.

Peter’s response before beholding the glory of the Lord in the transfiguration is drastically different than afterward. Peter began by longing to do something, to busy himself. In everything happening around him on that mountain, Peter could not be centered. Often in our busyness, like Peter, we still try. But when we gaze upon beauty, when Heaven invades the small moments of pause and we breathe deep, we begin to realize that our striving is unnecessary because Jesus fills those moments with himself.

I’ve feared silence like Peter, because I felt it was my responsibility to fill it. I’ve settled into discord at times, unable to rest although my heart was harried. I’ve let an out of tune season droll on, because it was the only noise I could muster alone. The melody of a ministry, though, is not produced of myself, but is God-breathed and comes only when he is directing the notes of our work. Interludes of beauty and rest cut into our vulnerable prayers, like a selah cuts into the middle of a psalm: into our lament, into our circumstances and even our brokenness, so that our focus shifts and our eyes meet Christ alone.

Choose to Pause and Fill Up

END_OF_DOCUMENT_TOKEN_TO_BE_REPLACED

Men and Women Working Together
END_OF_DOCUMENT_TOKEN_TO_BE_REPLACED