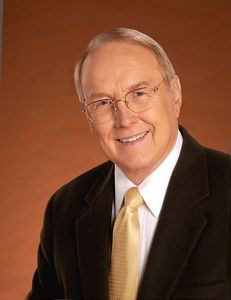 James Dobson resigned as chairman of Focus on the Family but will continue to play a role at the Colorado Springs-based organization he founded, The Associated Press reports. Dobson's wife, Shirley, also resigned from the Focus board.

Dobson, 72, already turned the ship over six years ago to Jim Daly, the organization's president and chief executive officer. He will continue to host Focus on the Family's radio program, write a monthly newsletter and speak out on moral issues, Daly told Eric Gorski of the AP.

"One of the common errors of founder-presidents is to hold to the reins of leadership too long, thereby preventing the next generation from being prepared for executive authority," Dobson said in a statement. "... Though letting go is difficult after three decades of intensive labor, it is the wise thing to do."

On political matters, Dobson "will continue to speak out as he always has - a private citizen and not a representative of the organization he founded," said Gary Schneeberger, a Focus on the Family spokesman. He said the nonprofit ministry and Focus on the Family Action - an affiliate set up under a different section of the tax code that permits more political activity - will continue to be active on public policy.

Dobson has a devoted following. His radio broadcast reaches an estimated 1.5 million U.S. listeners daily. Yet critics say his influence is waning, pointing to evangelicals pushing to broaden the movement's agenda beyond abortion, gay marriage and other issues Dobson views as most vital.

"In the short term, in the near term, Dr. Dobson will stay committed to the issues close to his heart," Daly said in an interview. "He'll continue to speak out on those topics."

Update: I asked our Twitter followers what they thought Dobson's resignation and whether they listened to him or read his books. Here a few responses:

tnhuckaby@CTmagazine I don't have time. I don't always agree with him, but he has been very faithful over the years. To be respected for that.

sarahflashing@CTmagazine not sure if Focus can have the influence without him...that's the danger of building an organization around a person.

detellis@CTmagazine Dobson will remain a legand in Christian broadcasting and defending Christian family values. I believe in Jim Daly's leadership.