As Pentecostalism rises in Latin America, so does spiritual and political support for the Holy Land.
Kate Shellnutt|May 17, 2018 10:24 AM 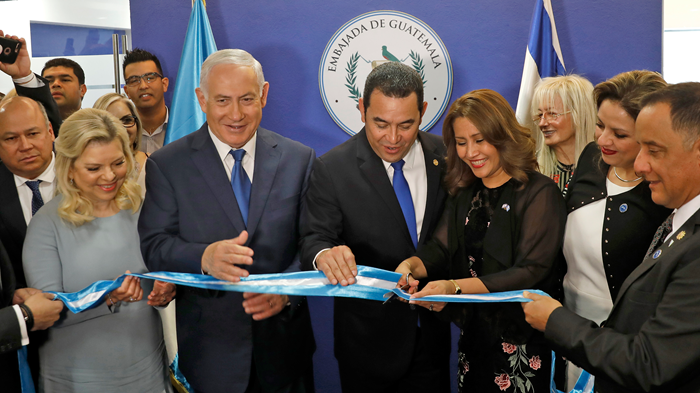 The United States wasn’t the only country to move its embassy from Tel Aviv to Jerusalem this week. Just days after Trump administration officials and American pastors Robert Jeffress and John Hagee attended the historic—and contentious—opening in the holy city, Guatemala did the same.

“We have had an excellent relationship with the people of Israel since the foundation of the State of Israel,” President Jimmy Morales told CBN on Wednesday.

His Central American country, now the most heavily evangelical nation in Latin America, was an early supporter of Israel’s independence in 1948 and the first to establish an embassy in Jerusalem in the late 1950s. (It was later 1 of 13 nations that withdrew their embassies from the disputed city due to a 1980 United Nations resolution.)

“We’ve had excellent relations, and we have to strengthen that relationship,” he said. “And I believe we’ll be receiving a blessing for both peoples by doing the right thing.”

“People in Guatemala pray for the peace in this region, pray for Jerusalem, and they are excited,” said Sarah Angelina Solis, Guatemala’s ambassador to Israel, in an interview with CBN. “I feel this is a gift from God. I know that a lot of blessings will come after this decision. This is a promise in the Bible, in Genesis, and I don’t think, I’m sure many blessings will come for Guatemala.”

Its pale blue and white flag once again alongside Israel’s in the Jewish state’s largest city—a symbol, and some say a harbinger, of broader Zionist sentiments swelling in Latin America.

As once Catholic-dominated nations in Central and South America see the rise of evangélicos, particularly from Pentecostal and charismatic traditions, they’ve also grown more supportive of Israel as a political state and a holy land, keen to the Lord’s words to Abraham: “I will bless those who bless you, and whoever curses you I will curse; and all peoples on earth will be blessed through you” (Gen. 12:3 NIV).

Guatemala and Honduras—which have undergone the most dramatic declines in Catholic identity (down nearly 50 percent in 45 years, according to the Pew Research Center)—were among just a handful of countries to side with the US when the UN voted to condemn its decision to recognize Jerusalem again.

In a speech at an American Israel Public Affairs Committee conference, Morales, an evangelical entertainer with a Baptist seminary degree, thanked President Donald Trump and said his “courageous decision has encouraged us to do what is right.”

Guatemala’s third evangelical president, Morales has prioritized Israel since his election in 2015, making the country his first official visit outside of the Americas.

Due to his decision to officially recognize Jerusalem, Morales was given an award by prominent Christian Zionist Mike Evans, founder of the Friends of Zion Heritage Center in Jerusalem, and visited by dozens of leaders involved with the Latino Coalition for Israel.

“It is our desire to see other Latin American nations follow the bold decision and leadership of President Trump and President Morales,” said Lourdes Aguirre, director of the coalition, which met in Guatemala in January.

Pro-Israel evangelical leaders from the US joined the event, including Trump faith advisers such as Michele Bachmann and Family Research Council President Tony Perkins.

“In the face of strong international opposition and even some resistance within the US State Department, Guatemala has remained a true friend of Israel by publicly proclaiming the biblical and historical fact that Jerusalem is the undivided, eternal capital of Israel,” Perkins said in a statement, going on to praise Morales’s pro-life and pro-family policies.

Israeli politician Michael Oren, former ambassador to the US, predicts that more of Guatemala’s neighboring countries will be following Morales’s lead, telling CBN News that “some Latin American countries” have also indicated interest in moving their embassies to Jerusalem. Commentators speculate the nations might also be trying to curry favor with the US.

The faith that led Guatemala’s top officials to make the move may be particularly prominent back home, where about 40 percent of the population is now Protestant, according to 2014 research by Pew as well as 2017 research by Chile-based Latinobarómetro. But it is becoming a more powerful political force throughout the region—which is good news for advocates for Israel.

Rabbi Yechiel Eckstein, founder of the International Fellowship of Christians and Jews (IFCJ), told Christianity Today last year that wherever Pentecostal traditions have spread across the globe, so has Christian Zionism.

Research backs up his observation, finding a correlation between the growth of these traditions and support for Israel. “Just as Pentecostals and Charismatics experienced remarkable success spreading their movement around the globe, exuberant expressions of Christian Zionism proliferated alongside these preexisting Pentecostal networks as well,” wrote Joseph Williams, a religion scholar at Rutgers University.

This shift in Latin America corresponds with efforts by Hispanic leaders in the US to rally more Hispanic American Christians behind Israel. Currently, according to LifeWay Research, a plurality support the Jewish state, but around a third do not have concrete views on its theological importance or political policy.

Leaders of the Hispanic Israel Leadership Coalition, a group affiliated with the National Hispanic Christian Leadership Conference, have held pro-Israel events in places like Nicaragua (40% Protestant), Venezuela (17% Protestant), and Cuba. Last year, Nicaragua reestablished its diplomatic relationship with Israel after a seven-year break.

IFCJ promotes its message through hundreds of radio broadcasts throughout Latin America, and now has an affiliate in Brazil, where 80 percent of the 42 million evangelicals are Pentecostal.

Those evangelicals carry increasing clout—particularly in major cities like greater São Paulo, home to 52 evangelicals for every 100 Catholics, and Rio de Janeiro, home to 71 for every 100. (For the first time in its history, Rio’s mayor is a pastor, a leader within the controversial neo-Pentecostal denomination the Universal Church of the Kingdom of God.)

Others have begun to see evangelical politicians compete as more serious presidential candidates, such as Colombia’s Viviane Morales, a Protestant representative with a record for defending religious freedom; Venezuela’s Javier Bertucci, a pastor who hopes to evangelize and implement Christian values in office; and Costa Rica’s Fabricio Alvarado Muñoz, an evangelical musician who lost in a runoff last month.

Many of the Protestants in Latin America are involved with denominations such as the Assemblies of God, the Church of the Nazarene, the Church of Christ, the Church of God, or other charismatic-leaning churches, scholars noted on Evangelical Focus. Together, an estimated 1 in 8 people living in Latin America belong to such groups, according to Franz Damen, a former ecumenical official with the Catholic Bishops of Conference of Bolivia.

Due to their faith—in part, their understanding of the end times, prophesy, and spiritual blessings—members of these Protestant traditions are more likely than Christians overall to take Zionist and pro-Israel positions.

“American Pentecostals’ and Charismatics’ appropriation of Jewish-themed ritual forms and identities bolstered Christian Zionism’s ability to replicate itself around the world,” said Rutger’s Williams, parsing the role of national exceptionalism as he studied the Pentecostalization of Christian Zionism.

“Like their American counterparts, believers across the globe wanted to know that they too were God’s chosen.”

Blessed Through Israel: How Guatemala’s ...