Human flourishing has received several recent notices by New Testament scholars in the last decade or so. N.T. Wright, in his After You Believe, saw human flourishing (eudaimonia) as a way of presenting the ideal Christian life in the New Testament. Then Jonathan Pennington’s work on the Sermon on the Mount study includes Human Flourishing in the title.

Neither of these went after the topic as the central study of the book so I welcome Julien C.H. Smith’s Paul and the Good Life: Transformation and Citizenship in the Commonwealth of God. Here is a book that gets after flourishing’s major elements and I’m looking forward to a blog post on each of the major topics: salvation – all leading to citizenship, character, community, and creation. The Four C’s of the Good Life.

Even though the very telos of the good life would thus have been contested by Paul’s contemporaries, I contend that there was an accepted fnmework within which this goal was understood to be pursued. There are four elements to this framework.

First, the good life is a communal, social, even political project rather than merely an individual One. For Aristotle, the good life must be pursued within the city-state, or polis, and for Paul, this social context is the heavenly commonwealth, or politeuma, as he writes to the church in philippi (Phil 3:20). For both Aristotle and Paul, the life of human flourishing thus implies membership, or citizenship, within a commonwealth directed towards this end.

Here Paul’s theology of ecclesiology is meshed with a more public perspective.

Second, citizenship within this commonwealth requires moral transformation, the acquisition of a character that reliably leads one to discern and choose the good for oneself and the polis. Aristotle contends that one acquires this sort of character by pursuing arete, a term we normally translate as "virtue” but which refers to a type of excellence suited to a given task. Although Paul uses the term arete only once (Phil 4:8), he likewise understood that citizenship in the heavenly politeuma both required and resulted in a transformation of character. 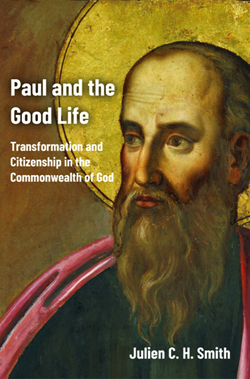 A welcome element of any talk of human flourishing is his emphasis on character formation. Churches today are not often enough focused on character as too much emphasis is given to other measurements of success – numbers.

Third, as anyone who has lived with at least one other individual for any length of time knows, shared life leads typically, if not inevitably, to conflict. Thus the political pursuit of the good life requires political unity, or – to preserve alliteration – the preservation of community. The concern for unity amidst diversity within the polis is a constant refrain amongst political philosophers in Mediterranean antiquity and also a recurring motif of Paul’s letters.

Fourth and finally, although the pursuit of the good life is anthropocentric, it is not anthropomonistic; that is, it does not conceive of humans as “unique and uniquely solitary, cut off from the community of creation.” Humans are “implaced” creatures, existing only within a larger framework of physical and biological processes, and thus the life of human flourishing must attend to ecology, the interconnected web of relationships comprising all of life. Within the Greco-Roman philosophical tradition, the environment within which humans live was understood as nature. Paul, informed and shaped by Israels Scriptures, understood this rather as creation.

The Four C’s of the Good Life: citizenship, character, community, and creation.

Join the conversation on Facebook
Tags:
None
Posted:
December 23, 2020