Ross Douthat is a writer for the op-ed section of The New York Times.

The following interview revolves around Douthat’s much anticipated book, The Decadent Society: How We Became the Victims of Our Own Success.

Moore: I’ve read your two previous books, To Change the Church and Bad Religion. It seems that you take up your pen to write regularly on decline and drift. To what degree, if any, does this present book extend and build on the concerns of the previous two books?

Douthat: As the titles suggest, those were both books about religion, about American and Catholic Christianity, and about the ongoing theological civil wars that have hobbled institutional religion in the Western world since the 1960s. So you could say they were about decadence, in a certain way – about a period of theological stalemate and institutional decay. And The Decadent Society, then, widens the lens to capture secular society as well, and tries to figure out why exactly the future hasn’t ended up being as dynamic and hopeful and creative as many people in the 1960s expected them to be.

Moore: The word “decadent” conjures up all kinds of images depending on your frame of reference. What exactly do you mean by decadent?

Douthat: Not exactly what most people might expect: This isn’t a book about moral decline, or at least it isn’t only about that. Rather, I’m using decadence to describe a situation that rich societies enter into once they stop advancing, stop having new frontiers to explore, stop having pride in their own past and confidence in their future. A decadent society is characterized by stagnation, drift and repetition at a high level of development – by political stalemates that nobody can figure out how to break, by disappointing economic growth and slowing technological progress, by declining birthrates and old age, and by cultural repetition as people return to the same fashions, movie franchises and ideological arguments. For us, that means an eternal return to 1975 or so, an endless recycling of Baby Boomer arguments and stories and ideas. 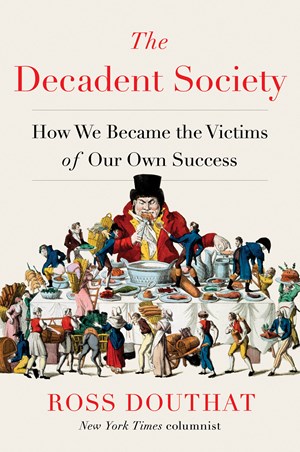 Moore: You take pains to show that the past thirty years don’t have the impressive breakthroughs in technology as the thirty years before those. How can that be with I-Phones, the Internet, and self-driving cars?

Douthat: You mean the self-driving cars that can’t drive in rain or snow and seem likely to be “just years away” for years to come? But that riposte aside, the internet is clearly a tremendous breakthrough, and the great exception to the story of stagnation, and the least decadent area of our economy. However, that concession comes with two caveats: First, our internet-era innovations are narrower than in past eras of American history, concentrated in technologies of communication and simulation and less substantial in areas like energy and transportation and even medicine (where we’ve made grinding progress but few penicillin-level breakthroughs). Second, the nature of that innovation, the way it encourages people to retreat into virtual worlds or disappear into their screens, has the effect of accentuating decadence in other areas – directing political impulses away from real-world organizing and into “likes” and “faves,” drawing young people away from marriage and romance and even sex itself with the lure of virtual alternatives, creating a kind of learned helplessness about the non-online world

So yes, the internet is the exception – but one that sometimes seems to confirm the rule.

Moore: You argue, persuasively in my estimation, that there is stagnation not only in the technological sector, but in culture, media, even politics. For the last in that trifecta, aren’t Bernie and Trump novel disruptions?

Douthat: Absolutely: They represent, in different ways, rebellions against decadence -- attempts to break out of the existing stalemate, forge a realignment, and push American politics onto a very different track. And it’s not a coincidence that they’re led by old men, because they’re both reaching back to the America of their youth, to the pre-decadent society if you will, with their promise to make the country great again or put it back on the path to the socialist utopia.

But as we’ve seen from Trump’s presidency, with its mix of incompetence, chaos and conventional G.O.P. policymaking, just because you want to rebel against decadence doesn’t mean you’ll win. The underlying gridlock has a way of reasserting itself, and I suspect it would do so in a Sanders presidency as well. So even though you can usefully think of Joe Biden as representing a politics of sustainable decadence, and Sanders as representing a more radical alternative, the systemic elements of decadence mean that it terms of actual policymaking their presidencies might not be that different from one another.

Moore: In a provocative section on the “end of history” per Fukuyama’s thesis, you mention that “he argues that identity politics, the desire for recognition from groups and tribes and nation-states, might end up destroying the liberal democratic order from within.” (emphasis added) I’m curious if you think the same thing might be afoot with the American church. That is, could more destruction be coming from within, not without. And with respect to your subtitle, is the American church also becoming the victim of its own success?

Douthat: Certainly there’s a provocative argument that Mainline Protestantism, by emphasizing theological liberalism, individualism and a Christianity focused on this-worldly politics, triumphed and dissolved simultaneously. The world I describe in Bad Religion, where a kind of individualistic, “God Within” spirituality prevails in the American religious middle, is a world where aspects of Liberal Protestantism became the culture’s conventional wisdom, but then people decided they didn’t need actual Protestant churches anymore.

Could something similar happen to evangelicals, especially in the zone where megachurch spirituality blurs into Oprah-ish positive thinking? Certainly, and I do think that kind of internal dissolution more likely bring evangelicalism low than a fierce persecution from outside.

Alternatively, you could imagine a world where a generational division ends up breaking evangelicalism, with the older evangelical world’s support for Donald Trump as a catalyst for alienation and disillusionment among the young. But that’s a little less of a case of success leading to dissolution; it’s more of an example of different people looking for different paths out of religious decadence and choosing such different options that they come to a parting of the ways.

Moore: I’ve read several works like Postman’s, Technopoly: The Surrender of Culture to Technology. As you well know, Postman wrote that book in 1993!

You devote much of your book to concerns over what so-called social media and related things are doing to us. A few lines from your book I would like everyone to mull over (and you unpack a bit) are the following:

If you want to feel like Western society is convulsing, there’s an app for that, a convincing simulation waiting. But in the real world, it’s possible that Western society is really leaning back in an easy chair, hooked up to a drip of something soothing, playing and replaying an ideological greatest-hits tape from its wild and crazy youth, all riled up in its own imagination and yet, in reality, comfortably numb.

Douthat: So as a newspaper columnist who spends a lot of my professional life online, this a question I struggle with a great deal: How much is the intensity of online political debate actually, well, real, and how much is it a substitute for the kind of political engagement and conflict and yes, even protest and violence that defined prior eras of crisis and convulsion? To what extent does the internet generate real culture, and to what extent does it create an anti-culture, all superficialities and surfaces and simulacra, in which Western history is recycled as a greatest-hits tape, without depth or novelty or real transformative power? I am old enough now that it’s always possible that my pessimistic answer reflects fogeyish tendencies, that I’m just not enough of a digital native to recognize the real creativity percolating on YouTube or Twitter. But I think there’s a pretty good chance that Postman had it right.

Moore: Os Guinness told me many years ago that futurists are not serious historians. I know you do not want to make any confident predictions about what awaits us in the next few decades, but would you indulge us with a bit of speculation?

Douthat: Precisely because of Os’s warning, my book doesn’t make strong predictions; it tries instead to unspool a variety of different possibilities, different ways that decadence could end and different ways that it could endure. But here are four actual predictions. First, I think that the immersiveness of the virtual realm will increase dramatically over the next generation, such that the internet feels more and more like an alternative to fleshly reality and not just a supplement – but that this trend will conjure up a stronger counter-movement, a defense of non-online existence and experience (maybe especially in childhood and education). And this conflict over the uses and abuses of the internet will blow up into a major culture war, one that to some extent scrambles existing social-conservative and social-liberal categories.

Second, I think that the most fraught fault line in global politics will be the imbalance between an aging, extra-decadent Europe and the still-growing populations in the Middle East and (especially) sub-Saharan Africa. That unstable equilibrium already gave us one migration crisis and a lot of political turmoil; with climate change as a likely accelerant for migration northward, it will give us many more crises and eventually midwife some sort of strange Eurafrican future before the 21st century is finished.

Third, I think the trajectory of Christianity in China, its relationship to whatever government rules in Beijing and its influence over the Chinese diaspora and sphere of influence, will be as important to the condition of global Christianity fifty years from now as anything that’s happening in the Western churches’ endless post-1960s civil war.

Finally, I predict that decadence will survive the coronavirus, and my book will still be entirely relevant a year from hence. But if not, the paperback will get one heck of a new introduction.

Some of Dave’s teaching videos can be accessed at www.mooreengaging.com. His can be reached at www.twocities.org.

Join the conversation on Facebook
Tags:
None
Posted:
March 6, 2020