The Christian story is the Story of Everything
Scot McKnight

If you don’t believe me, read C. Kavin Rowe’s brilliant new book, Christianity’s Surprise. No, pause right now and buy the book. It’s that good and that important.

Especially today because in the USA we elected a president yesterday and if you don’t have Anastasi-centricity you may lose your way. You can lose your way in two ways: enebriated joy or drunken despair. Either way, the problem is something the earliest Christians faced: empire. That is, belief in the centricity of the emperor and the Roman empire.

The empire story is not the Christian story. The story of Christianity is the story of everything and it begins where? The resurrection of Jesus from among the dead ones. It is an Anastasi-centric story.

Rowe points us to the biggest surprise – the resurrection – that turned all other stories on their head and gave to the Christians a surprising story because it is a Story of Everything. Let that sink in as you read the next two paragraphs from Rowe’s wonderful book.

The story of everything is a story about all there is. The very earliest Christians believed that the God who elected Abraham and his offspring and who raised Jesus of Nazareth from the dead was the one who made all that is not God. There is God and not-God, and that is all there is.

A reigning story is scientism, the belief that the truth of life is unlocked by and only by science. Rowe observes that

A story of origins answers the question, Why is there something rather than nothing? This natural science cannot do. It picks up immediately after this first question and asks a second, Why do the things that are here appear/behave the way they do? The story of our end answers the question, Where are we ultimately headed and for what? This, too, natural science cannot answer. The most it can say is that the physical understanding of the universe shows that it is expanding, and that the processes included in its expansion will likely be the same in the future as they have been and are now. About our ultimate purpose or destiny in the future, it necessarily remains mute.

Thus, the one of Christianity’s surprises is that it thinks it has the Story of Everything, and it begins with the resurrection, without which there is no Christianity. (My bold)

The origins of the story of everything lie in the life, death, and resurrection of Jesus. When that is forgotten, the story becomes just one more version of humanity’s attempt to talk about itself with the word God. Focusing on Jesus, however, identifies God as the one who raised Jesus from the dead, and anchors the story in the original surprise that launched Christianity into the world.

Think about the Gospels’ own narrative. Over and over there are indications everyone embraced a political messiah who womp the Romans on the head and send them packing. Mary’s own Magnificat anticipates a political Messiah, Jesus has to correct the disciples’ own perception of who he is/was, and they don’t comprehend his main points. Peter chops the ear off a leader because he's ready for the revolution. 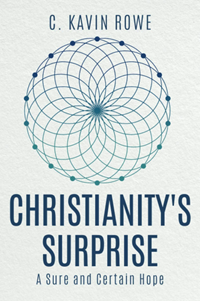 Except the revolution does not come.
Jesus was arrested, tried, publicly humiliated, crucified.
They took off scared to death and thinking the whole program got it wrong.

Then it happened, and “it” here is the piont: the resurrection.

When that happened everything turned around. The story was right after all, but the disciples had it wrong (with everyone else).

The resurrection converted the crucifixion into atonement. Let that one sink in.

The resurrection turned everything around.

What the resurrection meant for the world was the unpacking of their surprise: when they thought about God’s victory of life over death in conjunction with Jesus’s ministry, they began to see that a new world had dawned right in their midst. Jesus’s resurrection showed the future, what God intended for humanity, and that future was now present, here, and creating a new world. “New creation” became the name for what happened in Jesus’s resurrection.

This Story of Everything fulfills the story of Israel and challenges pagan stories of Stoicism, polytheism, and imperialism.

Imperialism is the cutting edge today.