Jesus was a refugee, an asylee
Scot McKnight

The Bible has plenty of resources for our discussions about immigration, about undocumented workers, about the wall, about borders, and M. Daniel Carroll R., in his new book, The Bible and Borders: Hearing God’s Word on Immigration, addresses the complexities of the Old Testament in the context of Israel’s own exiles and immigrations and asylum.

In the latter part of this accessible-for-churches book he turns to Jesus and then to Peter. Today we look at Jesus.

First, Jesus was himself – with Joseph and Mary – an asylee who was a refugee from the wrath of Herod. They escaped to Egypt, where they apparently stayed about 2 years (Matthew 2:13-23).

Now after they had left, an angel of the Lord appeared to Joseph in a dream and said, “Get up, take the child and his mother, and flee to Egypt, and remain there until I tell you; for Herod is about to search for the child, to destroy him.” Then Joseph got up, took the child and his mother by night, and went to Egypt, and remained there until the death of Herod. This was to fulfill what had been spoken by the Lord through the prophet, “Out of Egypt I have called my son.”

When Herod saw that he had been tricked by the wise men, he was infuriated, and he sent and killed all the children in and around Bethlehem who were two years old or under, according to the time that he had learned from the wise men. Then was fulfilled what had been spoken through the prophet Jeremiah:

“A voice was heard in Ramah,

Rachel weeping for her children;

she refused to be consoled, because they are no more.”

When Herod died, an angel of the Lord suddenly appeared in a dream to Joseph in Egypt and said, “Get up, take the child and his mother, and go to the land of Israel, for those who were seeking the child’s life are dead.” Then Joseph got up, took the child and his mother, and went to the land of Israel. But when he heard that Archelaus was ruling over Judea in place of his father Herod, he was afraid to go there. And after being warned in a dream, he went away to the district of Galilee. There he made his home in a town called Nazareth, so that what had been spoken through the prophets might be fulfilled, “He will be called a Nazorean.”

Call it what you want, but the holy family’s experience is one of flight, hiding, refuge and seeking asylum in a foreign country where they could be surrounded by and welcomed by fellow Jews. Only after it was safe did they return, and even then they went to Nazareth to escape the eyes of the powerful. 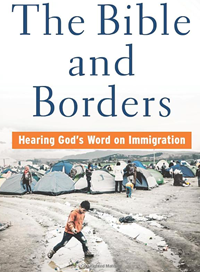 Here we find elements to consider for immigration. If Jesus was an immigrant, I wonder to myself, are we not to see Jesus in all those seeking asylum in the USA?

On top of this, Carroll considers the Samaritans and Jesus.

Think of the Samaritan woman in John 4 – a political enemy, a woman, in a hostile land known for violence against Jews, people with whom Jews did not mix, and disciples who wonder aloud if Jesus isn’t wasting his time – and Jesus does what? He treats her as made in God’s image, as worthy of redemption, and offers to her redemption. She becomes an agent of redemption.

He does not turn away from her but toward her.

The lepers of Luke 17, healed, and the one who gave God glory and expressed gratitude to Jesus was a Samaritan. Outsiders treated with grace.

Jesus did not turn away from them but toward them.

The parable of the Good Samaritan is well know (Luke 10). Who is my neighbor? is the question. Jesus shows that the Samaritan models what it means to be neighborly when some Jewish customs prevented the priest and Levite from being neighborly.

Jesus uses the Samaritan as a paradigmatic example of how to treat others.

The Samaritan, Jesus says, did not turn away from the wounded but toward them.

Overall, Carroll’s even larger point, is that Jesus has his eyes on the margins and brings those on the margins to the center. So, Matthew 25:31-46 – however one reads it the passage advocates merciful action toward those who are suffering.

I take away from this section in Carroll’s book this thought: it is our calling as followers of Jesus to turn toward, not away from, the immigrant.