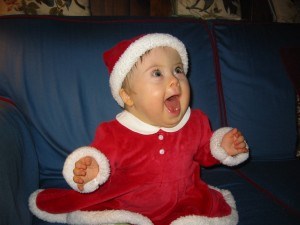 Penny's First Christmas, five years ago, when she thought Santa was super fun

Penny has had an aversion to, and fascination with, Santa Claus for years now. Four years, to be precise. It began with shyness, almost as if she were a baby again, cuddling against my chest. Then screams of terror. Last year, with her dad in the Santa suit, sobs. (I tried to tell her that Santa wasn't real. She didn't believe me.) Sometimes she talks about Santa in June. Just checking whether he's coming back. This year, I prepared her for Santa's appearance at the annual Down Syndrome Association Christmas party. The whole way there, "Let's talk about Santa again. I don't like Santa."

Over time, it came out that she thinks Santa is a little too loud. We happened to pull into the party an hour late, and lo and behold, there was Santa in the car next to us. Penny clung to me as if I were about to give her over to the police. She asked him if he could be a little quieter. And then, well, let's just say that she and I both needed a change of clothing at the end of the interaction. As we drove away, she asked me to sing Santa songs. When we got home, she asked me to show her the North Pole on the globe. Maybe she just needed reassurance that he was far far away.

In the midst of her terror, and interest, in Santa, I was reminded of the origins of St. Nicholas. In my daily (let's be honest–attempt at daily) Advent reading, I read abut the Feast of Saint Nicholas:

According to tradition, Nicholas' parents died when he was young, leaving him a large sum of money With his inheritance, Nicholas practiced charity, helping those in need . . . While Santa has his bundle of toys, the gift that Saint Nicholas gives is nothing short of freedom from poverty and desperation. The life of Saint Nicholas is an example of faith made flesh in actions of true charity.

It's the time for giving gifts, and often those gifts take the form of clothes and gadgets and games, and I wrote for Motherlode last year about why Christians should embrace gift-giving as a part of our faith (A Spiritual Defense of Gifts). But it's also the time of year for giving to charity, and it was helpful for me to realize that charitable giving at Christmastime has a history that goes beyond the tax implications of the calendar year.

At the end of A Good and Perfect Gift, I mention that twenty percent of my proceeds from the book will go to two organizations that care for and share life with individuals with intellectual disabilities–the Special Hope Network and L'Arche. I hope you will join me in considering a gift in the spirit of Saint Nicholas, a gift to the ones Jesus came to love, the meek and lowly, the humble in heart, the poor and needy.

Africa; Christmas; Generosity; International
December 13, 2011 at 7:27 am
To add a comment you need to be a registered user or Christianity Today subscriber.