Home > 2011 > May
Public Schools and Our KidsAmy Julia Becker
expand 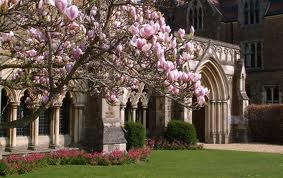 For most of my life, I attended private schools. I grew up taking a bus to a cinder block building 30 minutes away from our 5,000 person town. The bus stopped at a trailer park to pick up students along the way. Not exactly elitism, but still a school where tuition was required. We moved to Connecticut when I was in 6th grade, and I received three years of public education. For high school I lived at a boarding school and then went on to a private university.

My husband followed a similar path–private school in New York City, public school in New Orleans, and then the same boarding school (that's where we met) and the University of Virginia.

He now teaches at an independent school. 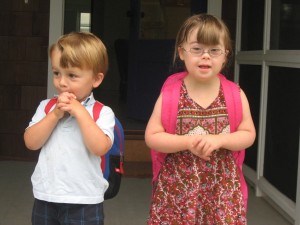 Despite all those years in the private/independent school world, I don't think we assumed our kids would follow in our footsteps. But we did assume they would have a choice.And yet, as soon as Penny was born, we became more or less wedded to the public school system in America. I couldn't be more grateful for the support and care Penny has been shown already in the 2 1/2 years she's been in school ("New School! New Friends!" and "Penny and William Go to School" for example). And I'm excited that both she and William will enter integrated classrooms at our local school next fall. From all I can tell, we happen to live in a school district with an exceptional group of teachers and therapists. I am certain that they will serve us well. I hope I will become one of those parents who makes a positive difference in return.

But I am also well aware that ours is truly an exceptional situation when it should be the norm. I just read Joel Klein's "Failure of American Schools" in this months' Atlantic. Klein was the head of the New York City public school system, and he sought many reforms on behalf of the students in that system. In the end, he felt stymied by the teachers' unions. Although I know that the problems in our schools stem from a confluence of complex factors including economic conditions, family life, medical history and cultural norms, I was nonetheless struck in this article by Klein's insistence that the current structure of America's schools serves teachers rather than students. In Klein's words:

[The unions] want, first, happy members, so that those who run the unions get reelected; and, second, more members, so their power, money, and influence grow. As Albert Shanker, the late, iconic head of the UFT, once pointedly put it, "When schoolchildren start paying union dues, that's when I'll start representing the interests of schoolchildren." And what do the members want? Employees understandably want lifetime job security (tenure), better pay regardless of performance (seniority pay), less work (short days, long holidays, lots of sick days), and the opportunity to retire early (at, say, 55) with a good lifetime pension and full health benefits; for their part, the retirees want to make sure their benefits keep coming and grow through cost-of-living increases. The result: whether you work hard or don't, get good results with kids or don't, teach in a shortage area like math or special education or don't, or in a hard-to-staff school in a poor community or not, you get paid the same, unless you've been around for another year, in which case you get more. Not bad for the adults.

But it's just disastrous for the kids in our schools...

I believe in our public schools, and all the more so now that I realize they are places that include all kids–from every socio-economic background, with or without special needs, no matter who their parents are or what they can accomplish on a standardized test. I want to be a part of making these places of inclusion places of blessing to everyone involved, student and teacher alike.

From all I can tell, the teachers at our local school care about serving students and go out of their way to do so. From what I read, that's not true in many school districts. What's your experience–as a child or as a parent? And what would it look like to be a part of changing things for the better?

Public Education; Publications
May 31, 2011 at 1:34 pm
To add a comment you need to be a registered user or Christianity Today subscriber.

Public Schools and Our Kids

Public Schools and Our Kids