Home > 2013 > January
What do Down Syndrome, Abortion, and Baby Girls Have to do with One Another?"Statistics also suggest that at least 50% of all fetuses with Down syndrome in the US are aborted. That rate becomes higher among women who have a prenatal diagnosis of DS (probably 70%) and higher still when talking about other Western nations (90%). So, while being born a girl in Asia is not exactly the same as being born with Down syndrome here, I wanted to suggest some parallels."Amy Julia Becker
expand 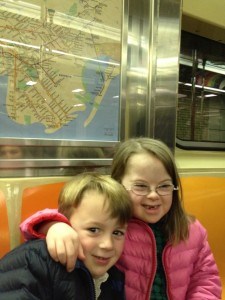 Penny and William ride the subway on her 7th birthday

When I write posts for other sites, I generally avoid the comments sections. Some longtime readers might remember a post I wrote for Motherlode over two years ago in which I explained why I wasn't screening my pregnancy for Down syndrome. Nearly 200 comments later, I was worn out as I realized how differently I see Penny and other individuals with Down syndrome in comparison to many readers. Still I counted it as a privilege to write for Motherlode about the topic, just as I count it as a privilege to write for The Atlantic, as I did yesterday (The Social Construction of Selective Abortion). I'm not going to chime in over there (though you are more than welcome to jump into that debate), but I did want to offer a few of the comments here.

My essay compares "gendercide" in some Asian countries to selective abortion of fetuses with Down syndrome in the United States. Statistics suggest that at least 100 million baby girls are "missing," which is to say they were aborted because of their sex. Statistics also suggest that at least 50% of all fetuses with Down syndrome in the US are aborted. That rate becomes higher among women who have a prenatal diagnosis of DS (probably 70%) and higher still when talking about other Western nations (90%). So, while being born a girl in Asia is not exactly the same as being born with Down syndrome here, I wanted to suggest some parallels. I wrote:

In India, daughters grow up with social stigma, a lack of educational opportunities and the prospect of becoming a burden to their parents. Substitute the words "America" and "children with Down syndrome" for "India" and "daughters," and you get the picture.

I go on to describe some of the challenges faced by people with Down syndrome and then write:

... medical and social challenges seem fixed and unchanging. But as the past 40 years demonstrates, these challenges reflect social mores and choices as much as biologically-based reality or necessity. In 1975, Congress ensured all children's rights to a free public education, including those with intellectual disabilities. Around that same time, parents on the whole stopped sending their kids with Down syndrome to institutions and availed themselves of "early intervention," therapy services that target physical and brain development from very early on in a baby's life. In 1980 the life expectancy for an infant with Down syndrome was 25. As a result of social change and medical advances, people with Down syndrome are now expected to live until at least 60. And people with Down syndrome overcome expectations every day. They read, they write, they go to work, they make friends. When given the opportunity, they lead lives of hope and promise.

Most of the commenters don't seem to understand the argument. For example:

Having XX is not a disability... To pretend that DS is the same as having XX is stupid.

To put it bluntly, there is no such thing as a shortage of DS people. Women are necessary for society in a very real and material fashion: if nothing else, they conceive and birth children. People with DS and other disabilities are not necessary in any culture. No society's stability is dependent on accessible number of disabled people. 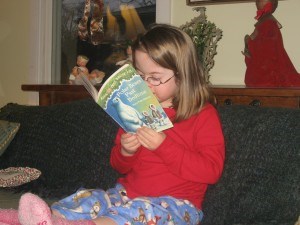 Penny reads one of her new books on Christmas Day

But some others offered counter-arguments:

First, in learning to care for and treat the disabled, we contribute to the body of medical and scientific knowledge that benefits the able as well. Second, we dramatically alter the character of our society by how we treat those perceived as "lesser". The ramifications of eliminating most children with Downs, for example, is not really known. 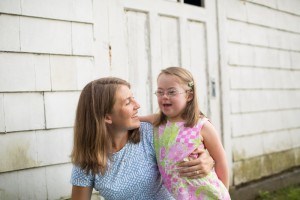 The point is that in some countries, having a girl can be a significant financial burden to families and the girls/women themselves lead lives that are very limited. In effect, having XX is a type of disability, just one that is a construct of society instead of having a physiological basis.

People with Down syndrome are more aware than any commenter here is giving them credit for. 99 percent of people with DS questioned, refer to themselves as happy. Over 200 programs nationwide offered at University levels. NIH funding for Down syndrome research is around $20 million a year, that's $40 per individual. Hardly a disproportionate drain on resources.

I could spend all day writing in response to these comments and the assumptions embedded within them, but I guess that's why I wrote a (short) book about the topic. So if you're interested in reading more or making your own comment, head on over to The Social Construction of Selective Abortion and consider purchasing What Every Woman Needs to Know About Prenatal Testing: Insights from a Mom Who Has Been There.

Abortion; Disability; Pregnancy; Publications
January 23, 2013 at 9:04 am
To add a comment you need to be a registered user or Christianity Today subscriber.

What do Down Syndrome, Abortion, and Baby Girls Have to do with One Another?

What do Down Syndrome, Abortion, and Baby Girls ...