Home > 2014 > December
Grace Amid an Ordinary ChristmasCan grace show up in the midst of sickness, snow days, Monopoly, and a manger?Amy Julia Becker 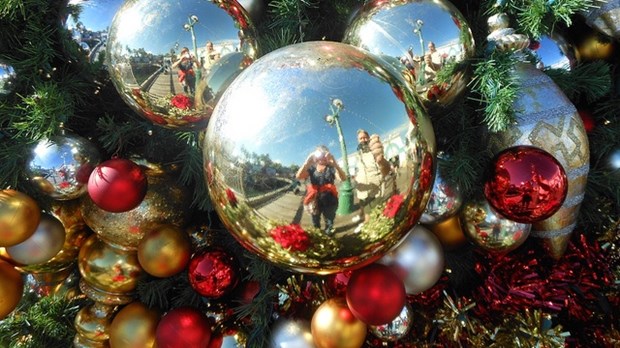 I’m probably not alone in entering the Christmas season with some combination of eager anticipation and dread. I won’t go on and on about the shopping and the baking and the parties, but I will note that this celebration also falls at the beginning of the sick-and-snow season. We had our first round of both this week, with me in bed with a cold and William home beside me. Yesterday I played a lot of Monopoly, and I was introduced to the “special Christmas version” of both Madagascar and Ice Age.

Then this Nor’easter hit, with sleet, so the kids are home for a few extra hours this morning. I’m already bucking myself up for a long winter.

A few months ago, I was talking with a pastor about the passage in John where he writes that Jesus was “full of truth and grace.” This pastor said that we usually see truth and grace as somewhat opposed to each other, but that we don’t need to see it that way. “The truth of the gospel is grace,” he said. The truth of the gospel is grace. He was applying that principle to his life as a pastor and the tricky social and political issues of our day. I’ve been working to apply it in my household, in my attitude toward my family, in sweeping and laundry and looking at report cards. When I was sitting on the floor playing Monopoly yesterday I kept asking myself, where is the grace in this situation? The answer was not obvious to me.

In the past, I’ve paid attention to the drama of the Christmas story. There’s the Annunciation, when Gabriel tells Mary she has been impregnated by the Holy Spirit. There’s the drama of Joseph’s corroborating dream, of Herod decision to murder all the baby boys who might threaten his rule.

But this year I’ve noticed that the Christmas story is about a family trying to make do. A man and a woman trying to love and honor each other and God. Trying to find a safe place to give birth. Trying to provide well for their child. The core of the story is that God became an ordinary human being, one that other people easily overlooked. That God announced this birth to ordinary people—shepherds in a field.

In the dramatic, in the ordinary, God shows up. Grace shows up.

But yesterday, when I was playing round four of Monopoly with my son, and my back hurt and I wasn’t working and I wasn’t getting anything done for Christmas, I was still wondering, Is there grace here? Later, my husband came home, and I listed for him all the things that had happened in the previous day. William throwing up in the middle of the night. Marilee coming in to our bed long before dawn. My hacking cough. Monopoly. The headlamp of the minivan that I had neglected for weeks and that finally caught the attention of the police officer who pulled Peter over.

I finally caught myself—Peter had been the one who got up with William, who gave his place in our bed to Marilee, who got the kids ready for school so I could get more sleep and try to recover. He had made lunches and brushed hair and packed backpacks. Peter was the one who had gotten pulled over and been late for a meeting. Peter had been God’s grace to me.

Maybe that’s the most miraculous truth of all. That there is nothing too mundane for grace. Nothing too ordinary. Not even me.

Christmas; Grace
December 09, 2014 at 7:20 am
To add a comment you need to be a registered user or Christianity Today subscriber.

Grace Amid an Ordinary Christmas

Grace Amid an Ordinary Christmas