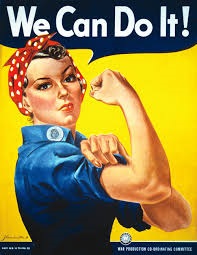 As blogger Samantha Field pointed out, I didn't do a great job at articulating point number two. Here's the way I put it:

Progressive feminist thought has often thrown the proverbial baby out with the bathwater. Instead of advocating for greater social and personal supports for women with unplanned pregnancies, and instead of calling upon men to take equal responsibility for the children conceived, we've legalized abortion. Instead of advocating for self-control and mutual respect and care in sexual relationships, we've determined that girls can be just like boys in their hookups, infidelities, and exploits. Much of the feminist movement has not empowered and protected women or called men to greater responsibility for their actions and relationships. Rather, it has encouraged women to become just like men.

Paternity leave certainly counts as progressive social policy. But for once it supports families rather than undercutting them.

Samantha Field has a lot to say about the problems with my post. I don't agree with all of them, but she makes a good and fair point that is worth repeating when she writes:

statements like "much of the feminist movement has not empowered or protected women" are categorically false.**

Feminism got women the vote.

Feminism made it illegal for a man to abuse his wife.

Feminism made it possible for a woman to leave her abusive husband.

Feminism ensured that women could own property.

Feminism allowed Becker to argue for paternity leave (or anything) in public.

I am grateful for feminism, for the reasons Field lists here and for the opportunities that I and my daughters have to learn and work and participate in every aspect of modern American life. My paragraph about feminism here was shortsighted because I singled out the two aspects of feminism that seem particularly problematic to me: abortion and sexual liberation. Moreover, I made some sweeping statements both about feminism and about our culture as a whole rather than carefully articulating an argument about both the strengths and problems I see within the feminist movement.

Still, as as a Christian (but also as someone with liberal/progressive/feminist leanings), I disagree with the liberal/progressive/feminist policies towards both abortion and sexual relationships. I disagree because I believe that most abortions and many casual sexual experiences are harmful to women (and, ultimately to men and to the rest of our society, but that's outside the scope of this argument). My feminist leanings lead me to want social policy that holds men accountable to participate more fully in caring for the children they father and that enables women to work and be mothers. My feminist leanings lead me to want to protect and care for and support not only the women who are pregnant but also the children they carry.

My feminist leanings ultimately stem from what I believe to be true, theologically, about every human being. It's a theology of our common humanity–our belovedness in the midst of our brokenness. It's a theology that says we belong not to ourselves but to God. A theology that says our identity comes from our belovedness. It's this same theology that led Jesus to defend the woman caught in the act of adultery, to stop and talk to the woman who had been bleeding for twelve years and to call her "daughter," to entrust women with the message of resurrection from the dead. It's a theology that says women and men are both created in God's image and that our greatest and primary purpose is to live as image bearers, as one who reflect the goodness, the faithfulness, the beauty, of God. It's this theology that leads me to want to articulate a vision of femininity that supports and protects sexual relationships of mutual trust, support, love, and faithfulness, a vision of femininity that welcomes and protects vulnerable children while remembering, supporting, loving their vulnerable mothers.

Samantha Field is right that I didn't do feminism justice in my post last week. But I stand by my assertion that feminism still has a long way to go to uphold a vision of women (and men) that does justice to who we are, the beloved daughters of God.

Why I'm Grateful for Feminism

Why I'm Grateful for Feminism