Though director Oliver Stone is no stranger to presidential biopics (JFK, Nixon), W. is his first film to tackle the subject of a sitting U.S. president, a fact that has drawn the ire of more than one critic. Isn't history written best with some distance and perspective? Bush is one of the most controversial presidents ever, after all, so couldn't Stone have waited a few years to give him a proper cinematic treatment (as he did with World Trade Center)?

W., however, does not aspire to write history, and it's not all that concerned with verisimilitude. Rather, it is a film about the George W. Bush mythos—a pop-art deconstruction of the larger-than-life, made-for-the-movies figure of "Dubya" that has loomed large over the world for the past eight years. And for what it is, W. is brilliant.

Recognizing the sheer immensity of the Bush narrative, Stone wisely chooses to focus W. on select moments in his life and presidency. The narrative is structured so that we jump back and forth between Bush's first term in office (roughly the 2002-2003 lead-up to the Iraq War) and his life before 1994 (when he was elected Governor of Texas). It is a testament to the thrifty script by Stanley Weiser (Wall Street) that a hyper-complicated president like Bush can be reduced—and, in some ways, understood—in the short span of two hours and eleven minutes.

The strength of the film is not necessarily its accuracy—though it seems true to Bush's life, Stone wasn't working for the fact-checking police—but that it artfully tells a compelling story. W is more Greek tragedy than political satire, more American Freudian fable than historical biopic. It is a flawed, patriotic mess of a movie that nevertheless feels familiar and ...

Join in on Facebook
Tags:
None
Posted:
October 17, 2008
More From:
Brett McCracken 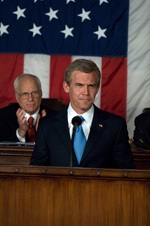