Seeking the light in the films of Christopher Nolan.
Nick Olson|July 18, 2012

Back in 1990, at the age of 5, I knew precisely when I needed to use the TV remote to pause the VHS of Batman (1989), directed by Tim Burton. At the moment the boardroom appeared, my mom would cover the television from view, protecting me from seeing Jack Nicholson's Joker electrocute another man until his head caught fire. I didn't know what I was missing at the time. I only knew that I wanted to see whatever darkness was being withheld from view.

Frankly, I'm not sure which came first: my love of Batman or my insatiable desire to make sense of life's darker shades. But what's certain is that both traits prefigure and explain my appreciation for director Christopher Nolan's neo-noir oeuvre, to which one more film—The Dark Knight Rises, the last of Nolan's Batman trilogy—will be added later this week.

Since 1998's Following, Nolan's films have been pervasively grim in both tone and content. But I find one particular element of this recurrent gloom most compelling—the sense in which this darkness is characteristically psychological. Nolan's films focus on persons who are, to varying degree, alienated and, as a result, rendered paranoid by their inhabitance of the alternate world that self-deceit produces. Nolan's characters are oft imprisoned inside themselves, in need of revelation and community. Desperate for a source of light, these characters often develop an irrational fear of life outside the mind. Their ability to perceive reality begins to deteriorate.

In Nolan's first feature film, the black-and-white Following, the protagonist gains enjoyment tracking strangers from a distance. But when he becomes entangled with Cobb—a burglar also seemingly motivated by thrill and curiosity ... 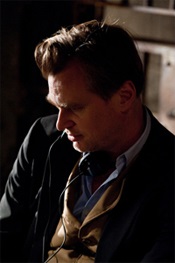