A film only (some) Christians could love.
Kenneth R. Morefield|October 4, 2013
Image: Lionsgate and Roadside Attractions
AJ Michalka in 'Grace Unplugged'
Our Rating

A host at the screening of Grace Unplugged I attended pleaded with the audience to buy out a movie theater auditorium for the film's opening night. We were chastised for going to see The Hunger Games, which, we were told, evangelical Christians frequented at a higher rate than any other demographic. Wouldn't we rather have more movies like Grace than more movies like Hunger? Better reach for our wallets. Otherwise, we had only ourselves to blame when our daughters started emulating Katniss Everdeen.

I've always found this kind of cause marketing puzzling. It seems to tacitly admit that the product is not good enough to sell tickets on its own. I'm not against niche marketing; there is actually something a little refreshing about seeing a Christian film stop worrying about crossover appeal and just making the faith content explicit. But doesn't it still have to be a good movie?

Grace Trey has just turned eighteen. She sings in the praise band at church under the direction of her father, Johnny Trey, a former professional singer who prefers the down-on-the-suburban-farm life to touring. Dad and daughter fight about all sorts of generic family stuff, but mostly about her not following his direction during the praise numbers.

When a talent show cover of Johnny's biggest hit renews interest, Johnny's friend and former manager, Frank "Mossy" Mostin, comes knocking. He has what Grace thinks is the opportunity of a lifetime: resume recording, resume touring, and resume being a star. Dad's not interested, but the lure of bright lights and big cities is too much for Grace. She steals Johnny's song and sends a copy to Mossy. Pretty soon she's on her prodigal daughter journey to Hollywood Gomorrah. Will her upbringing, conscience, and the intervention of a faithful Christian intern help get her back on the right track before she does anything with deeper consequences than shame and regret?

I can't really imagine anyone in Grace Unplugged going to see a movie like Grace Unplugged. Grace and her friends would be downloading videos of her hero, Renae Taylor. Dad and Mom would be too busy going to church and keeping their movie-set home immaculately spotless. Plus, you know, Johnny (James Denton) is just not interested in pop culture. The entertainment industry is a cauldron of sin, and the less we all have to do with it the better. Maybe Johnny would be the kind of parent to buy out a theater and tell his daughter she has to go or he will punish her by kicking her out of the praise band. And maybe Grace would go out of obedience. But more likely, she would tell Dad she was going, and then sneak into Katy Perry: Part of Me instead.

It's not that Grace Unplugged has a bad message: it just doesn't happen to be a great movie. Because of that, it tries to sell its message, rather than integrate it into a dramatic or entertaining story. And that's a shame, given how few contemporary family films there are about and for girls. Since Grace is eighteen, I feel like I should cross out "girls" and insert "young women" there, but Grace Unplugged thinks of and treats its heroine as a girl. Grace Trey in the city is treated more like Kevin McCallister in Home Alone 2 than Mary Richards in The Mary Tyler Moore Show.

In American culture, eighteen is old enough for someone to go to Hollywood and make her way alone, but the plot, not just dad, thinks of her as an adolescent. Once Grace is out of the house, Dad worries about sex (which the film calls all the "stuff" she might be "getting into"). But while she is at home, it's all about filling the car up with gas when asked and doing your musical number the way you rehearsed it. I can't imagine any teen who wouldn't roll her eyes at this as some representation of the secret life of the American Christian teenager.

Johnny's past apparently contains a few skeleton-filled closets, but they're all kept safely vague. They give him a reason to not want to be a star and—more importantly—to lend weight to his "do as I say, not as I did" concerns for his daughter. (Personally, I thought the backstory seemed more about justifying his controlling behavior than about providing him with actual life experience that might temper his judgmental attitude. But I've always found the whole father-daughter purity ring thing to be more than a little creepy.)

Grace Unplugged is supposed to be a prodigal daughter story. But it is so committed to its PG rating that it can't really let Grace slide into any serious moral decline in her adventure. She must realize that she made a bad decision, of course. But once she does, it is easy enough to correct. A prodigal story is about humbling oneself, but without any genuine debasement in the second act, the third act return plays more like ritual shaming than genuine reconciliation. 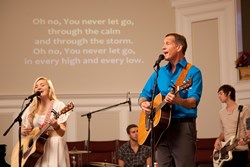 The film's script needs the prodigal story framework, however, because it can't make the broad themes of rebellion and obedience concrete. I counted at least five different montage scenes—usually an indication that the story is conceived in terms of a handful of dramatic scenes with little thought given to what happens before or after them. Michalka is pleasant as a performer, but were she as good as the script says Grace is, I don't think the script would have to keep telling us how good she is.

In one scene, dad watches her online video and has some sort of epiphany. He finally accepts that Grace is grown up and has talent. Still, Grace needs to come home because … God wants her to, and running away from God is bad.

Why God wants Grace to return home isn't really explored. It works better if you don't question its assertions and just take them as gospel truth. If you are young and passionate about something (particularly art or music), then that passion is a danger through which the devil will tempt you. So of course God wants you to give it up, or accept the church version of it.

In that sense, the film is somewhat metafictive, in the sense that it's about the industry in which it exists. Grace has to choose church music over professional performance. But it's equally important that it is clear that she is every bit as talented as her secular counterparts. She has to come home, humbled—but only after succeeding. If Christian music (or film?) is less prestigious than its secular counterparts, at worst this is a love offering that talented Christians make because hiding your light under a bushel is always preferable to being a light in a dark place. If Hollywood weren't such a sinful place, we'd all be raking in Grammy awards faster than Taylor Swift can drink a Coke.

So what's good about it? Well, though I've been crotchety here, I can tell you that the audience I saw the film with adored it. The performers make the most of some thin material; Denton and co-star Shawnee Smith project a mutually loving and supportive marriage. Kevin Pollak sidesteps the film's biggest potential landmine by making Frank a grown up, rather than a predator. Michael Welch performs altar call duties with a soft touch and the requisite earnestness, pointing Grace (and us) to the film's devotional tie-in, Own It, rather than trying to walk her through the four spiritual laws. That devotional tie in is yet another clue that the film wants young Christian viewers not to bring and evangelize their friends, but to consider their own faith. Grace Unplugged may be a film that only a Christian could love, but there seemed to be plenty of Christians loving on it in the audience.

Grace Unplugged shows some drinking and some family arguments. Grace gets a present of some lingerie, and she overhears a date talking in generic terms about his plans for having sexual intercourse.