1 – 20 of 447 ARTICLES
page:123...23Next >
Christians, Jews Form Coalition
By David Neff in Crystal City, Virginia|July 15, 1996
Conversations
CONVERSATIONS: Bringing the Jews to Jesus
Tuvya Zaretsky argues that only Y'shua has the credentials to bring peace to the Middle East.
By David Neff|May 20, 1996
Tens of Thousands of Indonesian Christians Flee Homes as Muslims Attack

Plus: Burying the cloning ban in a big hole, rescuing the Burnhams, criticizing modern missions, and other stories.
Ted Olsen and David Neff|December 01, 2001
Editor's Bookshelf
The Name-Tag Test

At least 50 detained in fresh crackdown on house churches, reportedly promoted by new video and book releases.
By Timothy C. Morgan with David Neff in Washington, D.C.|February 01, 2004
Editor's Note
Listening to the Critics
David Neff|July 18, 1994
The Editor Who Cancelled His Subscription
By David Neff, Executive Editor|July 10, 2000
Gorbachev and God

In visit to the Crystal Cathedral, former Soviet leader won't say he believe.
David Neff|October 01, 2000
Editor's Note
Post-Election Faith at Work
The next four years will not be a cake-walk for the pro-life, pro-family cause.
By David Neff|December 01, 2004
Editor's Note
Hunting the Big Gazelle
Why Rick Warren may succeed where others failed.
by David Neff|September 23, 2005
Editor's Note
The Culture of Me
Moral values are fostered by shared community values.
by David Neff|May 02, 2005
1 – 20 of 447 ARTICLES
page:123...23Next > 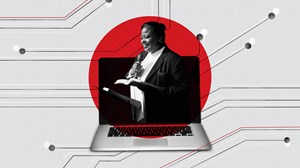