by Gordon Govier|October 05, 1998
What an Ancient Hebrew Note Might Mean

by Gordon Govier.|June 15, 1998
Searching for the Star of Bethlehem

A new theory makes the news. But are 21st-century astronomers looking in the wrong place?
Gordon Govier|December 19, 2008
Do Photos Evidence Lost Edenic River?

Israel Antiquities Authority says brother of Jesus inscription is a forgery, but supporters say its report may be flawed
Gordon Govier|June 01, 2003
News
Trial on Antiquities Fraud Ends, But Not the Controversy

Images of Jesus are everywhere, under 45 tons of rubble and on pieces of toast. New research tells why.
Gordon Govier|May 09, 2014
Profile
Archaeology's Rebel: Bible in One Hand, Spade in the Other 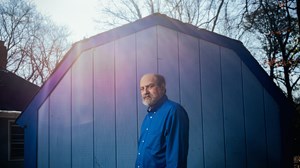