There are actually some original ideas at the Christian Booksellers Association Annual Convention
Mark Galli|July 01, 2003
Cover Story
A New Day in Vietnam

How a little NGO is helping Christians gain more freedom in a country still plagued by human-rights abuses.
Mark Galli|May 04, 2007
SoulWork
The Scandal of the AIG Bonuses

And the gospel of incomprehensible unfairness.
Mark Galli|March 19, 2009
Dispatch
Putting Evangelism on Hold

To read his book is to read about our fascination with ourselves.
Mark Galli|May 15, 2013
Editorial
Why Donald Trump Threatens to Trump the Gospel

There is something more important than our views of the controversial candidate.
Mark Galli|January 27, 2016
Christian History
George Whitefield: A Gallery of Leaders of the Awakening Army

Whitefield's co-workers in the great eighteenth-century revival.
Mark Galli|April 01, 1993
Christian History
How We Got Our Bible: From the Editor - Reading the Bible Backwards

What exactly happened at the most important camp meeting in American history?
Mark Galli|January 01, 1995
CT Pastors
THE BACK PAGE

Why exactly do we want to make a difference in the world?
Mark Galli|October 28, 2010
Editor's Note
Monitoring Controversy

William Paul Young explains the theology behind his best-selling novels and why he's no longer at war with himself.
Interview by Mark Galli|March 04, 2013
The Behemoth
The Ultimate Law of the Universe: Grace

The paradox is that we fulfill it by letting go.
Mark Galli|February 05, 2015
Editorial
Six Things To Do after the Supreme Court Decision on Gay Marriage

Now is not the time to sulk.
Mark Galli|June 26, 2015
Leer en español
What Else to Read about the Gay Marriage Decision 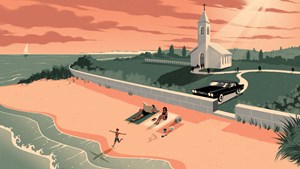