It's been a while since tennis legend Bjorn Borg was in the news. Too bad he's back because he's selling his Wimbledon trophies.
Mark Moring|March 16, 2006
Entertainment
The Passion of the Musicians

For composer John Debney and vocalist/lyricist Lisbeth Scott, the creative talent behind the soundtrack to The Passion of The Christ, scoring the epic film was the experience of a lifetime.
by Mark Moring |August 31, 2004
Entertainment
A Nanny With Sense ... and Sensibility

Emma Thompson, perhaps best known for 1995's Sense and Sensibility, wrote and stars in what she now calls her proudest project, Nanny McPhee, opening this week.
by Mark Moring |January 24, 2006
Filmmakers of Faith
Save the Wales

With War of the Worlds opening this week, we decided to take a look back at some of the best films in which extraterrestrials decide to pay a visit to our planet—with the intent to do us harm.
By Mark Moring|June 28, 2005
Entertainment
What's Up With the Ugly Baby?

Everyone's asking about the Passion scene where Satan is carrying a hideous infant.
by Mark Moring |March 01, 2004
News
Creed Breaks Up

Veteran singer/songwriter Glenn Kaiser, he of Resurrection Band fame, has been focused on playing and singing blues music in recent years. A Christian, singing the blues? You bet, says Kaiser. Here's why.
Mark Moring|June 13, 2005
Church in Action
A Different Kind of Neighbor

Derek Webb and Sandra McCracken embrace the streets of inner-city Nashville.
Mark Moring|November 13, 2009
Essays
It's the End of the World, and We Love It

We're flocking to movies about the last days, even in the midst of a penny-pinching recession. Why?
Mark Moring|March 05, 2010
Music Review
Make Believe

In his first year as new frontman of Newsboys, Michael Tait says he couldn't ask for a better fit.
Mark Moring|July 13, 2010
Entertainment
Death Be Not Proud

An enjoyable ode to 'Calvin and Hobbes' and the brilliant creator behind one of the best comic strips of all time.
Mark Moring|November 15, 2013
Entertainment
Choosing Life at the Movies

2007 could be remembered as the Year of Pro-Life Cinema.
Mark Moring|January 22, 2008
Entertainment
Puppy Love

AnnaSophia Robb, who plays the young girl in Because of Winn-Dixie, says her character just wanted to love and be loved. Leave it to an orphaned dog to show her how.
by Mark Moring |February 15, 2005
News
Sixpence Calls It Quits

Mark Moring, with various reports|February 01, 2004
Glimpses of God
After the Flood 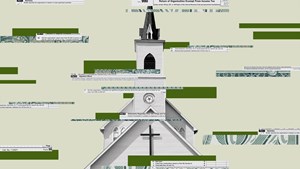